Souls are vital in improving your shikigami stats. We will be going over the basics of souls and what you need to look for to improve their power.

What Do Souls Do?

In Onmyoji Souls are a vital to making your shikigamis very powerful. Without them, you will not be able to do a lot of the end game content. Souls basically give stat boosts and you can equip 6 of them. The goal is to optimize your souls that are equipped on your shikigami and give them the best efficiency depending on whether they are offense, defense or support.

Now as mentioned before, you can equip up to 6 souls per shikigami. 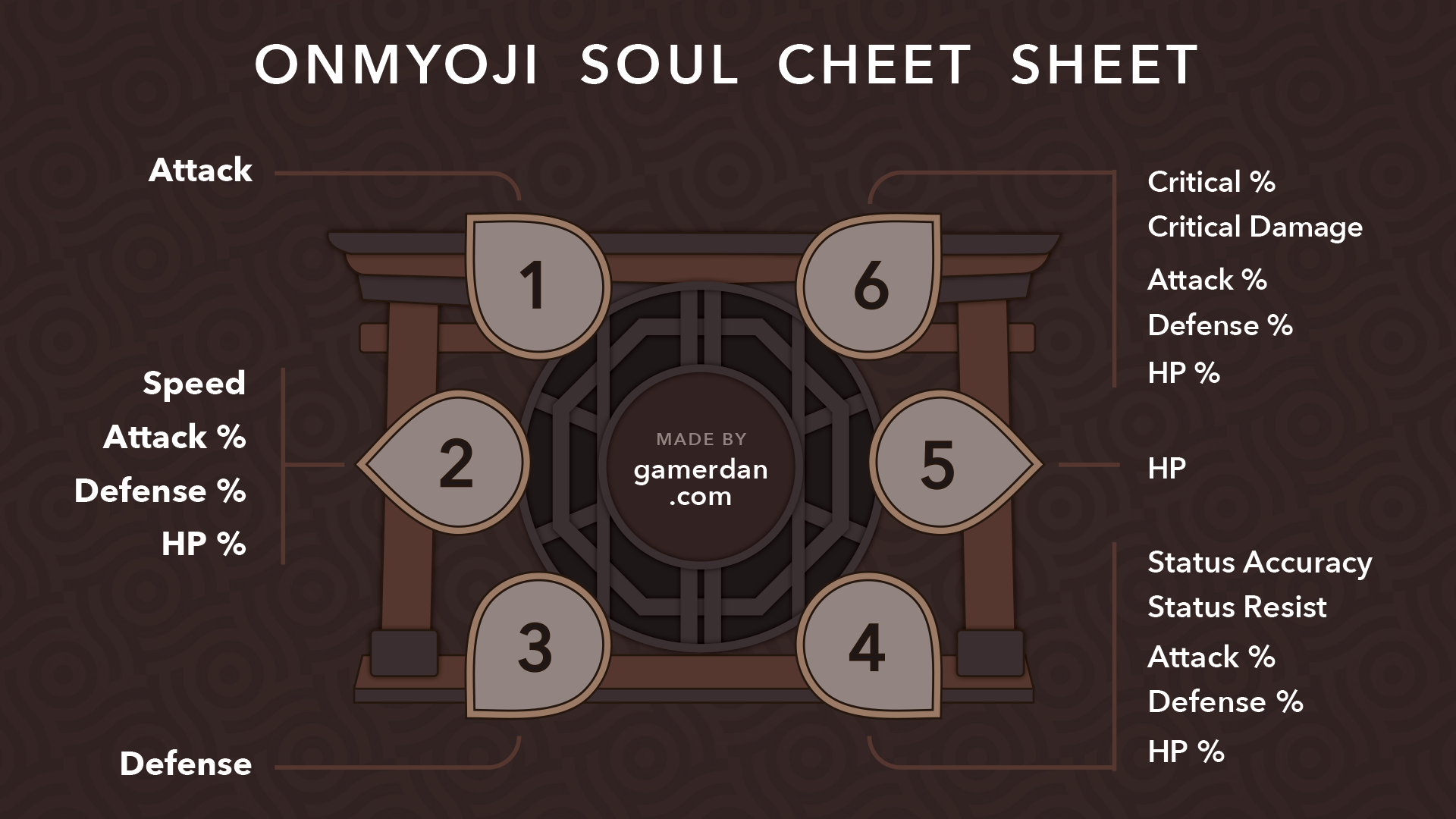 As you can see, slots 2,4 and 6 are flexible and you can find the most suitable % stat for your shikigami. Below is a simple guideline on what you should be focusing on when it comes equipping souls on your shikigami:

Now substats is also a very important factor in improving your shikigami. This is also where end game players spend most of their time on.

Here is a list of soul types available in the game. 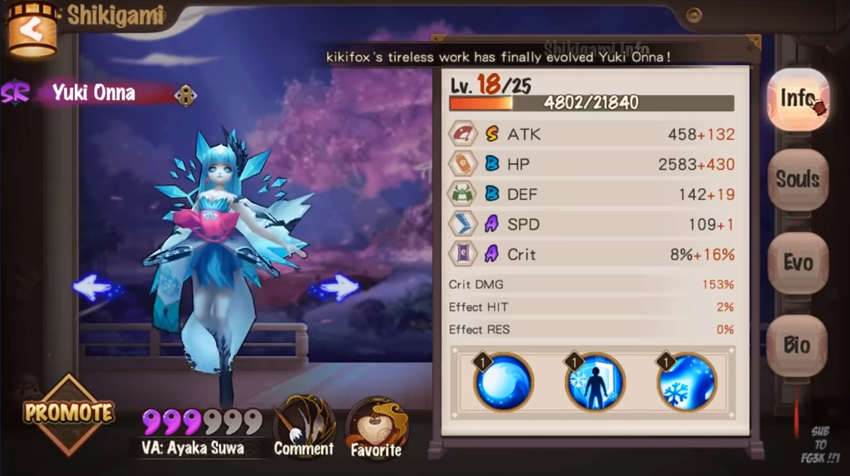 Here it will tell you what your character is strong with. So, attack in this example is S rank making her a good attacker, her speed and crit are both A rank, and then her HP and Defense are both B rank which is pretty average.

Now there are two different ways to think about building a soul set. First, is making your strengths even stronger so kind of focus on attack, speed, and crits.

Or focus on your shortcomings like HP and Defense to kind of level off your character. Now, for me and this character in the way I have her built for my team I kind of want to emphasize her strengths.

So I’m gonna be focusing on her attack and her speed. And that really synergizes with the way I have her soul set up. 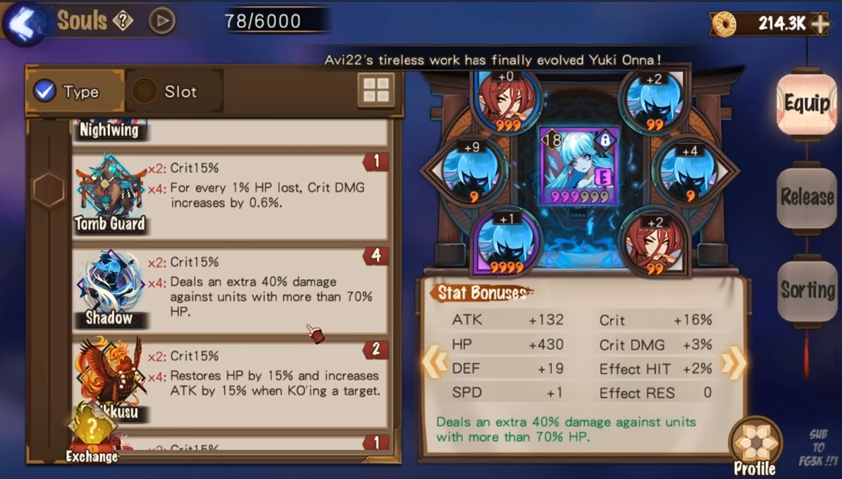 Now, if you take a look at the screen in the video it’ll give you a preview of every single soul set in the game. And all of the two slot and the four slot bonuses.

Every single soul set has their own unique two slots and four slots. So if you kinda take a look at the few examples you’ll see that there are some you have access to at the very start of the game.

The two slots bonuses is an HP Bonus 15% and the 4 slot is Damage taken decreases 30%. Now, when you build your character you always wanna have a 4 and 2 slot.

Now, for the character Yuki. My 4 slot is Shadow, Deals an extra 40% damage against units with more than 70% HP.

Now the reason why I have her like this is for two things. First, if you go look at her info tab I have her speed set up to be 110.

She is the fastest person on my line up team and I want her to go first so she has access to the starting orbs to cast blizzard because it’s a strong AoE with a freeze chance. So when I start I wanna AoE everyone with Blizzard and capitalize on her going first and I’m guaranteed to know that the enemy I’m going against is full Hp at this point.

If you don’t have a character using a soul set like Shadow going first you really kind of screw yourself cause you risk them not being at 70% or better. So depending on what your team set up is you can kind of play with that but the easiest way to do that is to make sure anyone with the Shadow set is your fastest character. 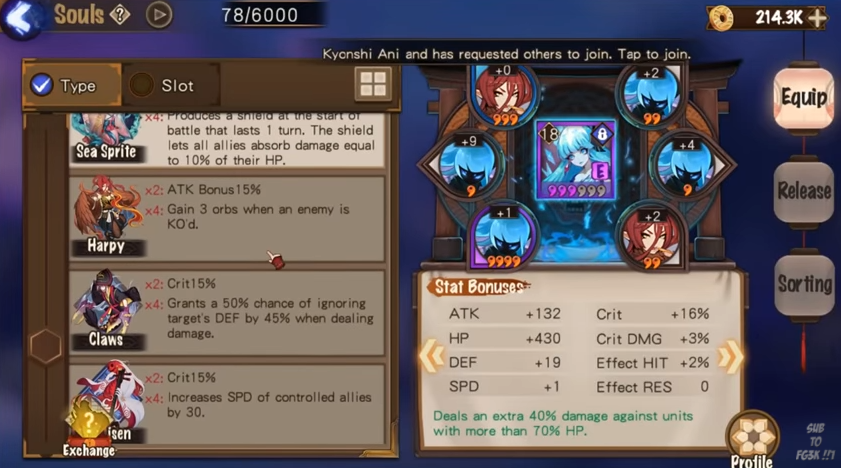 So with the 4 slot, I have her set up with the Shadow then with the 2 slot bonus I have her with Harpy. Her 2 slot bonus basically gives her Attack bonus by 15% and as we’ve shown her other primary stat is her attack which is S rank.

So she gets a lot of bonus from focusing on attack. So this is how you think about souls, you think about what the character can do as far as skills, how they synergize in your team, then capitalize on it.

Another tip I wanna give is something a lot of people are confused on. When they first play the game they get confused on what to do because there are a lot of things to explore.

What you need to do is kind of have to change your mindset when you play Onmyoji. When you log in for the day and have a lot of sushi to burn you have to ask yourself “What do I wanna focus on today?”

The reason I say this is simple. Say I wanna replace 1-star souls and do my best to get 2 or 3-stars if I’m lucky so I’m gonna try to get better Shadow drops.

Now you can do this in many different ways. You can go to your chapter list and easily tell which one has the best odds of getting soul fragments but it’s not the only place to get them from.

Grinding in chapters may or may not work depending on luck but it is one method. You can also go to the shop and get them there or you can also fight Orochi as well. 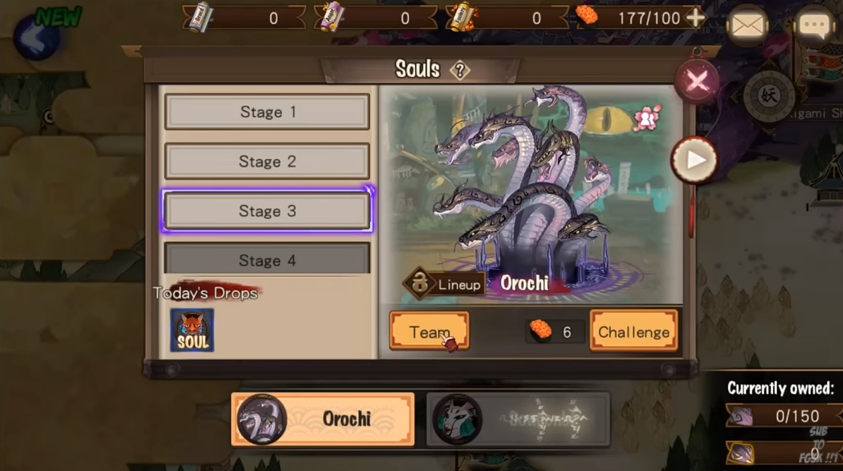 If you do however do the Orochi dungeon you wanna make sure you have a team cause it gives you more bonuses. Even if you can carry the fight by yourself it’s just better to get the rewards by having a team.

So that’s kind of the gist of what you’re gonna be doing in this game. Focus on characters you like, learn how they synergize then go grind for it. 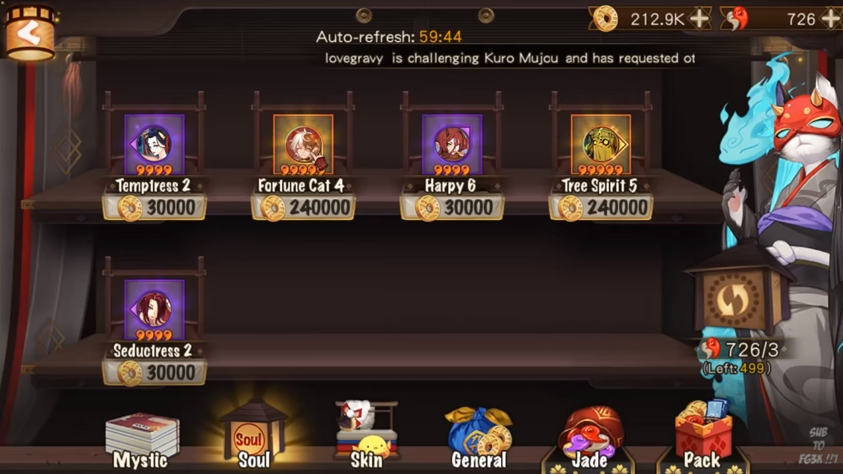 One last note on something you should do is going to the Soul shop every single day and buying everything you can. Go there and buy everything cause it’s super cheap, except the high price ones unless you really want them.