In Monster Legends, each monster has a different element that defines their type. Some monsters have dual typings letting them be two instead of just one.

There are ten elements in total in the game.

Habitats determine where certain monsters go once they’re hatched. It’s based on the kind of Element they possess.

Hybrid Monsters are able to go to different habitats from their Elements having each of their own. And Legendary Monsters can only be in legendary Habitats.

Monster Legends has a soft level cap at level 10  for monsters. The only way to bypass it is with the help of Temples.

The Temples also fall in line with the Monsters elements and require them to enhance those specific monsters. And Hybrid Monsters require both temples in order to be enhanced.

Monsters of opposite elements are unable to breed with one another. 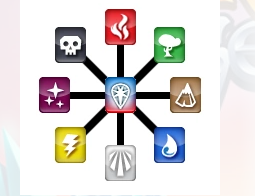 Two Hybrid Monsters must breed together in order to get that desired effect. For example, a fire and light element monster cannot breed.

But a Hybrid monster with the Fire element and another Hybrid with the Light element can breed. And this will bring the desired effect.

The Elements fall into a wheel in this game where each is strong against one and weak to another.

It’s a Zero Method, or Rock, Paper, Scissors method where everything can be beaten by something else. Types are also weak to themselves and deal half damage to themselves.

Hybrid monsters have a mixture of strengths and weaknesses depending on their dual types. But if a Hybrid is attacked by something that is both strong and weak against its elements, the strengths will be bypassed and it’ll only deal half damage.