Few games have met with the popularity that Dragon City enjoys. Nevertheless, there are a few other games out there that are just as fun as this popular game. If you think breeding dragons and using them to fight other dragons when playing Dragon City is fun, then you should try out these five games.

Dragons World is on of the dragon games that is also quite fun. Like Dragon City, this game involves breeding dragons in an exciting and captivating environment. Starting with cute bubbly baby dragons, you can breed the dragons until they turn into monstrous majestic creatures that can wow you with their warring antics on the battlefield.

The dragons can also be trained for battles in tournaments against other Dragons World players. The choice of customization options is also remarkable in this universe, just as in Dragon City. The environments in which the dragons are raised can be decorated, and a broad range of dragon species are available.

The tournaments, however, remain the highlight of this game. Players can come up with a great team of dragons to compete against other dragons. You just have to ensure that you spend enough time training your dragons for these combats.

Otherwise, with a well trained team, you can build a fearsome reputation in the Dragons World universe and enjoy all the perks that come with playing this exciting game at the highest level. The Pokemon style battles are also a nice touch since you will have more choices when it comes to attacks.

Summoners War has had its fair share of popularity as a mobile game; and even today, it has millions of fans around the world. Within this game is a universe that is just as immersive as what Dragon City offers. A major upside to playing this game is that its makers are always introducing updates that make it more thrilling.

Players can have command over a large number of monsters, and lots of customization options are available. And with its massive following and accessibility on both the iOS and Android platforms, this is a game that will never give you a dull moment.

The game is very layered. For instance, the monsters are divided into five categories – dark, light, fire, wind, and water. Additionally, the monsters are ranked by their toughness using a star-based system with monsters having a single star less powerful than those having a 6-star ranking.

Players can even control the stats (called Runes) of various monsters to make them more suited to the battles ahead of them. That said, each monster, depending on its classification, shines at one aspect in comparison to a monster from any other category and vice versa. So, your customization options will be determined by your fighting style and the strategy you intend to capitalize on when you get on the battlefield.

DragonVale is among the very first dragon games available to mobile users; and yes, it still offers a compelling gaming experience today. In this game, as in Dragon City, players have to raise, breed and feed their dragons in a thrilling and fun virtual world.

In DragonVale, you can hatch dragons, raise and breed them and then train them. In other words, you will have lots of chances to play around with your own ideas about what the dragon breeding environment should look like.

The creators of this game held nothing back when it comes to outfitting the game with various features. There is a broad range of dragons to work with, and other aspects of the game are just as varied. They include the buildings, habitats and islands.

Players of this game have another thing going for them – they don’t need to make any purchases to unlock the game’s features. However, that option is still available to those who would rather not wait to unlock the features through continued gaming.

Be warned though, the process of unlocking premium features without making a purchase will not be a walk in the park. Fortunately, the process will be captivating all the way. 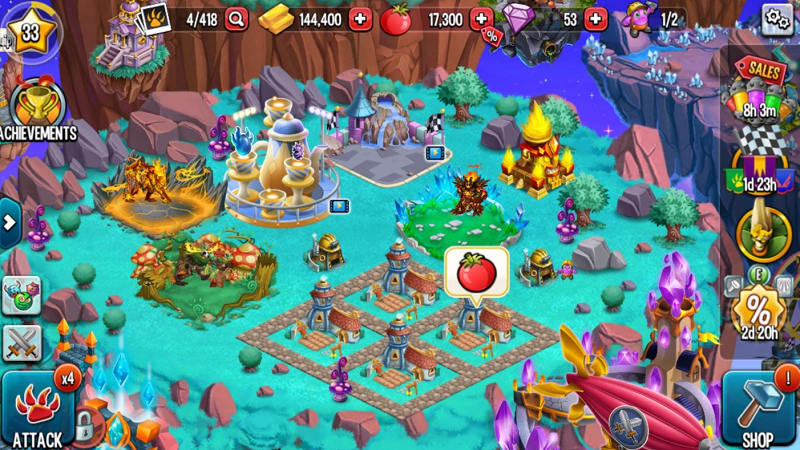 If you love Dragon City, and would like a game that offers a similar experience, then Monster Legends might be the right alternative for you. As a matter of fact, this game is from the creators of Dragon City (Social Point). The makers of Monster Legends have also done a great job of updating its features to keep it exciting.

This game is also great for anyone who wants an experience similar to what Dragon City offers but would also like a break from dealing with dragons all the time. With its strange and mysterious creatures, this game is sure to keep you hooked for hours.

Monster Legends has an ample selection of monsters, including magic, nature, dark, fire, and others. Each of these monsters has its unique habitat. A large selection of other features in this game also make it one of the best in its class – few games of this nature offer such a layered gaming experience.

In this game, players can still breed monsters, and get access to special buildings, décor, and other items as they go along. The refined graphic rendering, and the option to play it on Android, iOS or Facebook also ensures that this game is always close at hand.

Merge Dragons is a fun alternative to Dragon City that ushers its players into a world full of exciting dragons. The experience also comes with magic, rousing quests, mysteries, and an endless choice of excellent gaming features.

For instance, players have a choice of 22 dragon breeds when playing this game, and they have to go through 8 growth stages before they reach maturity.

The game takes place in a beautiful make-believe world whose design is subject to your creativity. You can also make exciting discoveries, solve hundreds of puzzles, and chase after treasures and every other thrill the game has in store for you.

In this game, you can match and merge dragon eggs, stars, trees, magical flowers, dragons, and so forth. And once you have built your skills and feel up to it, you can also venture into the malevolent world of Zomblins; and here you will need all your focus and concentration as you go against these evil creatures.

Generally, with over 140 trying levels of difficulty, this game will keep you hooked to the immersive gaming experience it offers. Building your dragon camp will be lots of fun and the entire experience is one of the best you can expect from a puzzle dragon game.