Welcome to gem farming guide for Dissidia Final Fantasy: Opera Omnia! We will be going over all the available methods to farm gems. Farm as much as you can because you need these to pull the much needed weapons for your favorite characters.

The campaign map gives you the most gems right at the start of the game. Upon completing chapter 1 and, you will receive 10,000 gems. This alongside the 2500 gems will allow you to pull 3 times for at least 4 gold weapons to start. If you are lucky, you might get more.

Each subsequent completion of a campaign map will net you 1000 gems.

Also, every new map that you do will give you a clear bonus of 20 gems. Some have missions where you “clear without KOs” and “clear within X turns” for 20 gems each. Completing hard mode maps for the first time also grants you 20 – 50 gems depending on the scenario.

Now, when you login daily, you will get 300 gems. Also, upon completing the 3rd quest by fighting 3 battles, you will get 100 gems. That gives you a total of 400 gems each day if you are active. 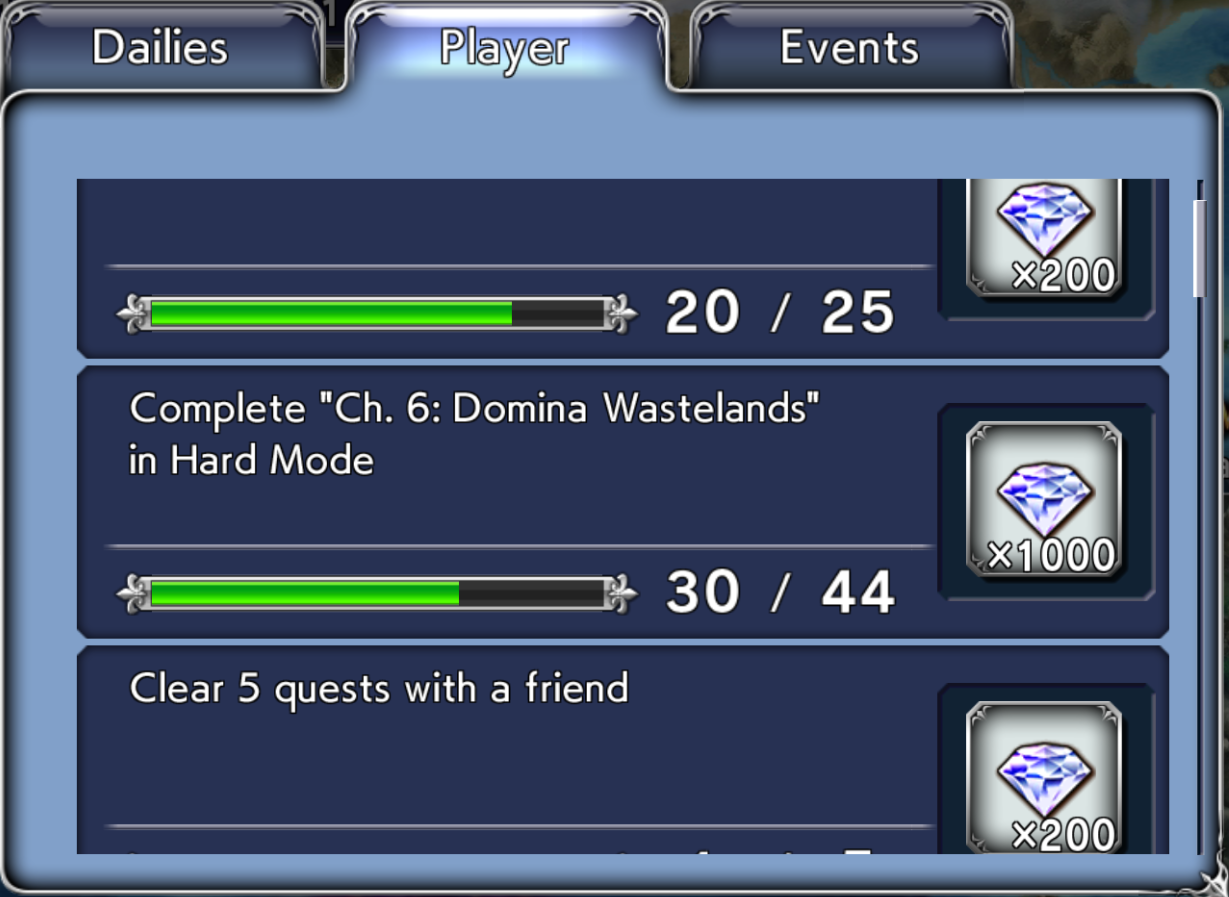 Unlike most gacha games, DFFOO has a more unique player leveling system. You rank up and gain 100 gems every time a character gains 10 levels.

So technically you can level a character to 50 for 500 gems. The leveling curve for a character from 30 to 50 slows down quite a bit, so if you really want to get extra gems, level each character to level 30 and then repeat the process.

For mission objectives, you will want to complete all chapters for normal and hard as a lot of them will give you bonus gems for completing objectives and high scores. Use your best characters to complete it. I highly recommend focusing on 3-4 characters (and make them powerful) at the start before leveling other characters. I have outlined it here on this guide.

The cycle quest gives you a great way to earn gems. The bad part is you get to complete them once and that is about it. Currently, you can earn gems for all 7 days and there are 5 levels. That translates to 100 gems per completed mission objective. That gives you a total of 3500 gems for finishing all objectives! 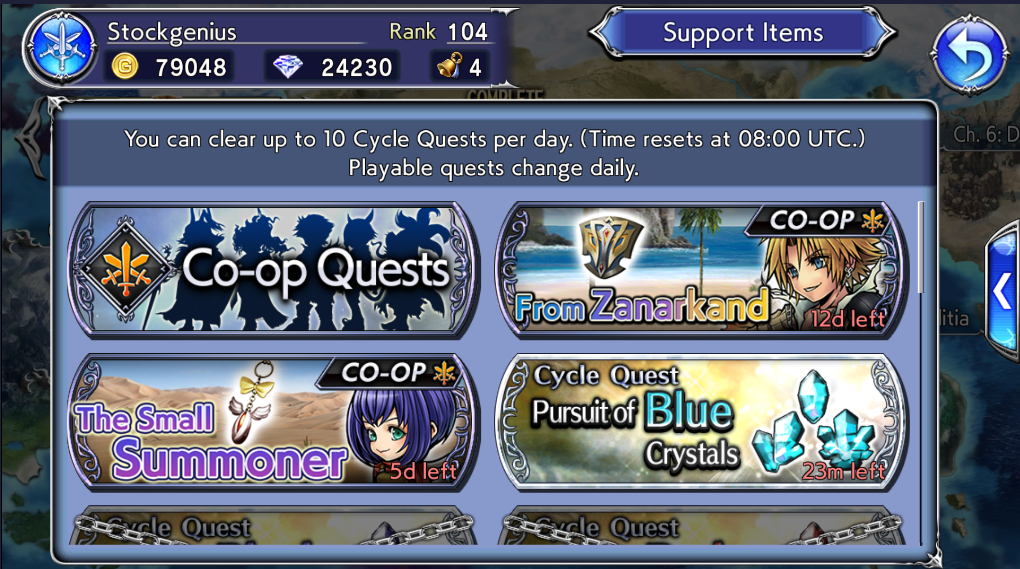 With character events popping up every week so far, you can earn gems easily by completing the character mission objectives. This will be your consistent flow of gems so you will want to make sure to spend a majority of your time here.

Each character event will have synergy characters that gain 40% bonus stats, giving them more battle stats to survive in the level 70 co-op missions. Now it isn’t always necessary to use synergy characters to be able to beat the mission though. It depends on the enemies. For example, the current Tidus co-op requires debuffs to be quite effective. So Laguna and Tidus are perfect for this.

World of Illusion is another way to earn not only gems, but weapon/armor upgrade materials. Some missions will also give character crystals. But for you to do well in World of Illusion, again you will need 3-4 level 50 characters with good weapons to do well here. 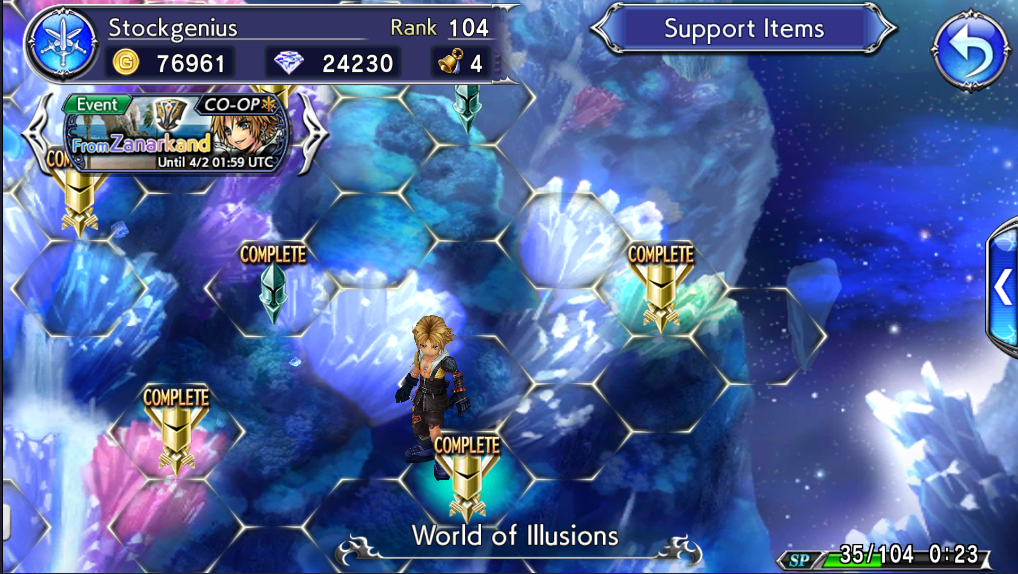 You can also utilize the character leveling trick to refill your SP there. In World of Illusion, there is a energy count(SP). So when you rank up, the energy count refills to max. So you will want to use up your SP and then go level up a character to rank up, giving you free SP refills!

If we follow the JP schedule, we should be getting a new chapter every 2 months, giving us more access to free gems for both normal and hard mode. I tend to keep gems I make from new chapters for pulling weapons of characters I really want.

You get draw tickets from completing co-op mission events, character events and sometimes as gifts for playing.

I suggest saving tickets for banners where you have a chance of pulling 35 CP weapons. The reason is because the 15 CP weapons will also be in the banner you pull that has 35 CP weapons, so it is quite pointless to keep using it on only 15 CP weapon banners.

To get a good idea of how many gems you are expected to get as a F2P player on a monthly basis, here is the breakdown: