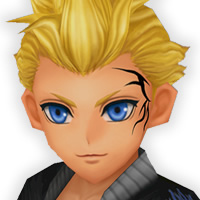 A SeeD cadet at Balamb Garden who fights alongside his classmate Squall to stop the sorceress. While his antsy and impulsive nature earned him a reputation as the school troublemaker, he is also an avid learner which has proven to be more than helpful from time to time.

Zell is a versatile melee BRV/HP attacker. He can only start off with BRV attacks initially but once in “Duel” buff, he can deal BRV/HP attacks. His second skill also deals thunder element damage!