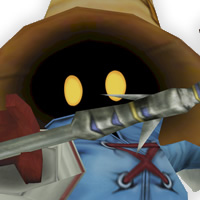 A black mage tender in years, who is reticent and somewhat naïve. While at first glance appears frail and unreliable in battle, he is in fact a powerful wielder of magic. He always strives to do right and through the numerous life-or-death encounters he faced with Zidane has grown confident in himself. Vivi enjoys theater.

Vivi is a decent BRV attacker that specializes in fire attacks. He works best against monsters weak to fire.

NEXT Warrior of Light