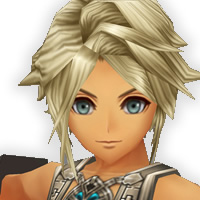 An orphan from the Kingdom of Dalmasca who dreams of becoming a sky pirate. While he despised the empire for taking his brother's life, he was helpless until a twist of fate brought him and Princess Ashe together. Along with his childhood friend, Penelo, and the sky pirate, Balthier, he sets out on a cosmic journey to free their homeland.

Vaan is a very strong BRV/HP attacker and his second skill is wind element, making him good against enemies that are weak against the wind element.