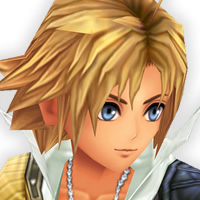 An animated and light-hearted blitzball player from the metropolis of Zanarkand. Sent to the unknown world of Spira,he meets Yuna and joins her on her pilgrimage as a guardian. His naturally cheerful demeanor and actions even transform the principles of Spira. Tidus resents his father, the legendary Jecht, and is known for his outspoken nature.

Tidus is a fast BRV/HP attacker that can apply speed debuff to the enemy. Let’s take a look at the key elements of Tidus.

So is Tidus’s Weapon Worth Pulling?

The answer depends on your team. Currently, there are other characters that can fill the speed BRV attacker role. They are:

If you happen to have any of the characters above with their weapons (or maxed out), then you can get by with not getting Tidus’s weapon. As a F2P player, your goal is to save enough gems and tickets to only pull characters you want. You can also give any 5 star sword weapon of other characters to Tidus to help you out with the current co-op.