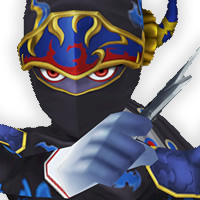 A ruthless assassin cloaked in darkness who some say would even kill his best friend for the right price. Although his loyalty can be sold to the highest bidder, he has been known to show concern for his comrades from time to time. He comes and goes like the wind, but he is always there for his dog, Interceptor.

Shadow is a speedy BRV attacker that can buff himself to attack multiple times.