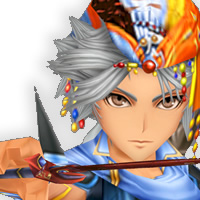 A young man driven out of his homeland, Fynn, when it is attacked by the Empire of Palamecia. After being taken in by the rebel leader Princess Hilda, he decides to join their cause to exact vengeance upon the empire. He always keeps the rebel army's watchword "Wild Rose" close to his heart.

Firion is a versatile unit. He can steal HP from his enemies while dealing BRV/HP attack with his first skill. His second skill is ranged and can be used to break enemy BRV shields.