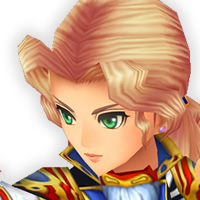 A captain of a pirate ship who decides to help the very people that try to commandeer it. Raised as a boy and shrouded in mystery, she discovers she is the princess of Tycoon and the elder sister of Lenna on her journey with Bartz's party. Her friends and the memories of her family are what drive her to push on.

Faris is a water based BRV attacker that can also apply debuffs like poison. Her second skill is actually a ranged attack.