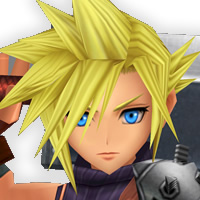 A young man who is a former SOLDIER. In pursuing his nemesis, Sephiroth, and attempting to protect his world, he learns the truth of his own past. He often claims to be "not interested"─a notion that is reinforced by his detached demeanor. It is a mask that breaks only when he is overcome by motion sickness.

Cloud is a versatile attacker that can do BRV/HP attack while also giving a chance to paralyze an enemy via Cross-slash.