In this in depth tutorial, I will be giving you a complete guide for progressing well in this game by warning you about the mistakes new players can make while playing this game.

In this game, you get to utilize a team of 3 fighters alongside 3 strikers(one for each fighter) to take on your enemies. You do not always have to use 3 fighters and 3 strikers at all. Some people just use 1 fighter and make him/her really strong. 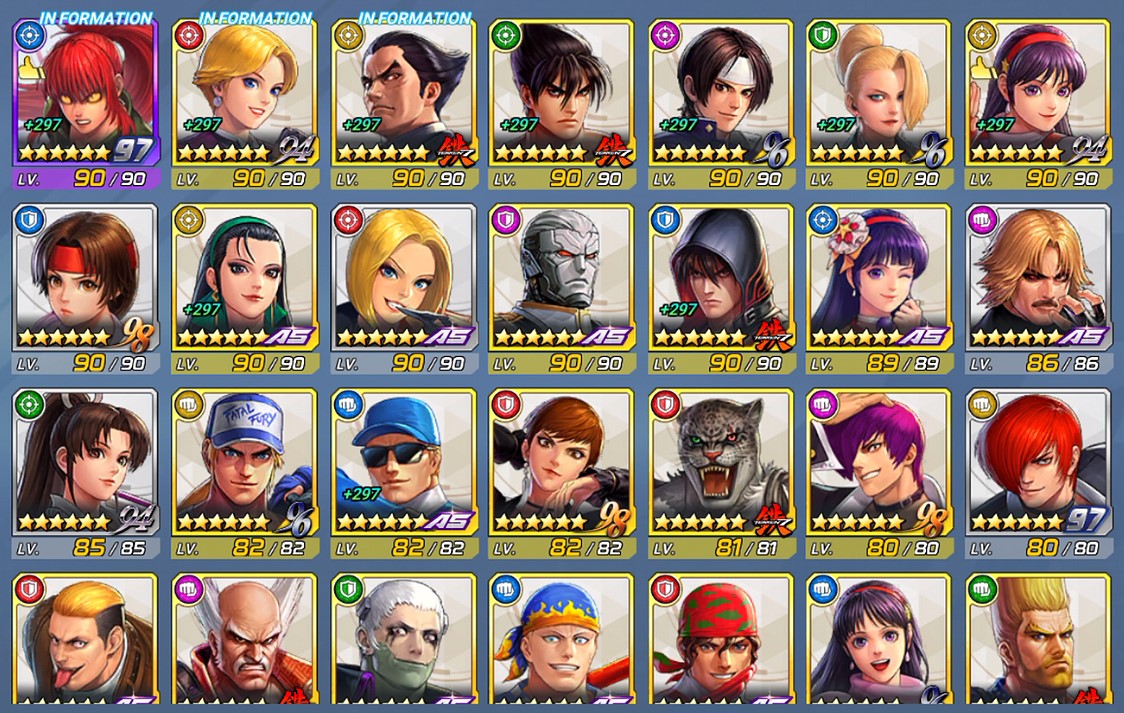 Fighters are separated into 3 types:

Strikers are supports that can help aid you in battle by doing damage or providing some sort of crowd control such as stun, freezes, healing and super armor etc.

A fighter will always 3 active skills, 1 finisher and at least 1 special card finisher which you can only use by equipping the special card. 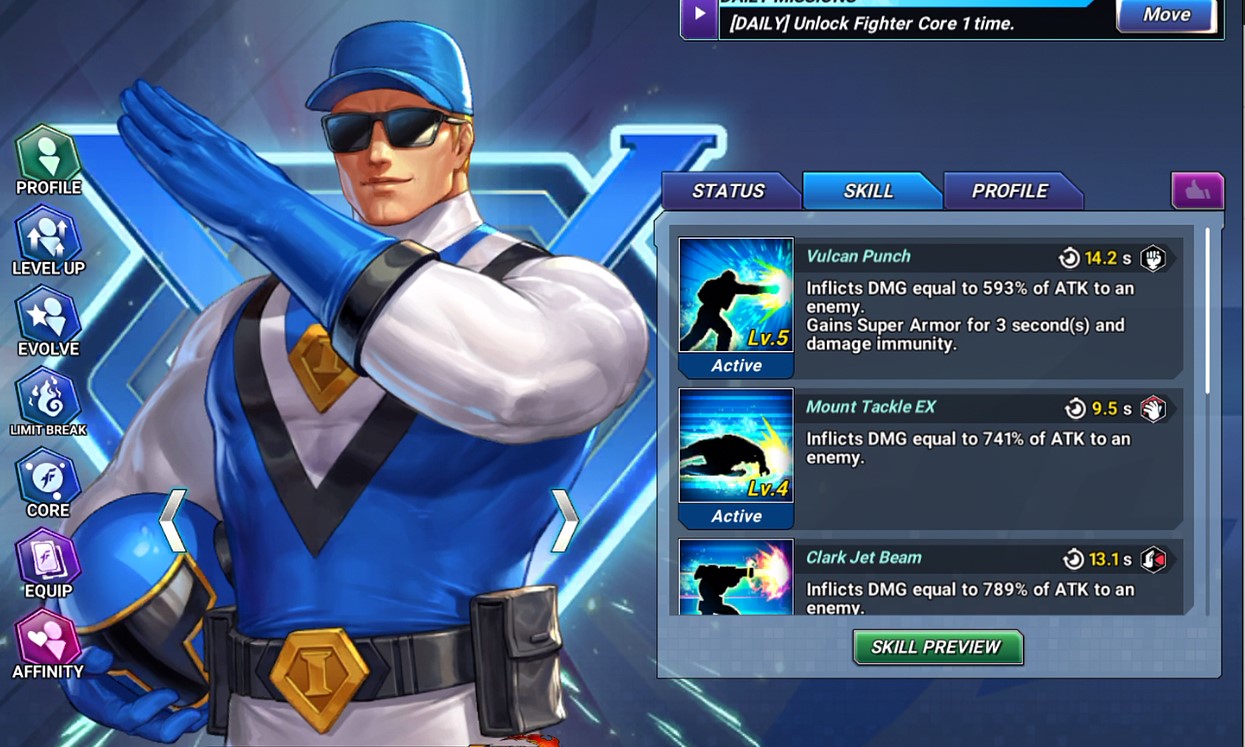 Skills can also be classified into 4 types:

The available game modes in the game are: 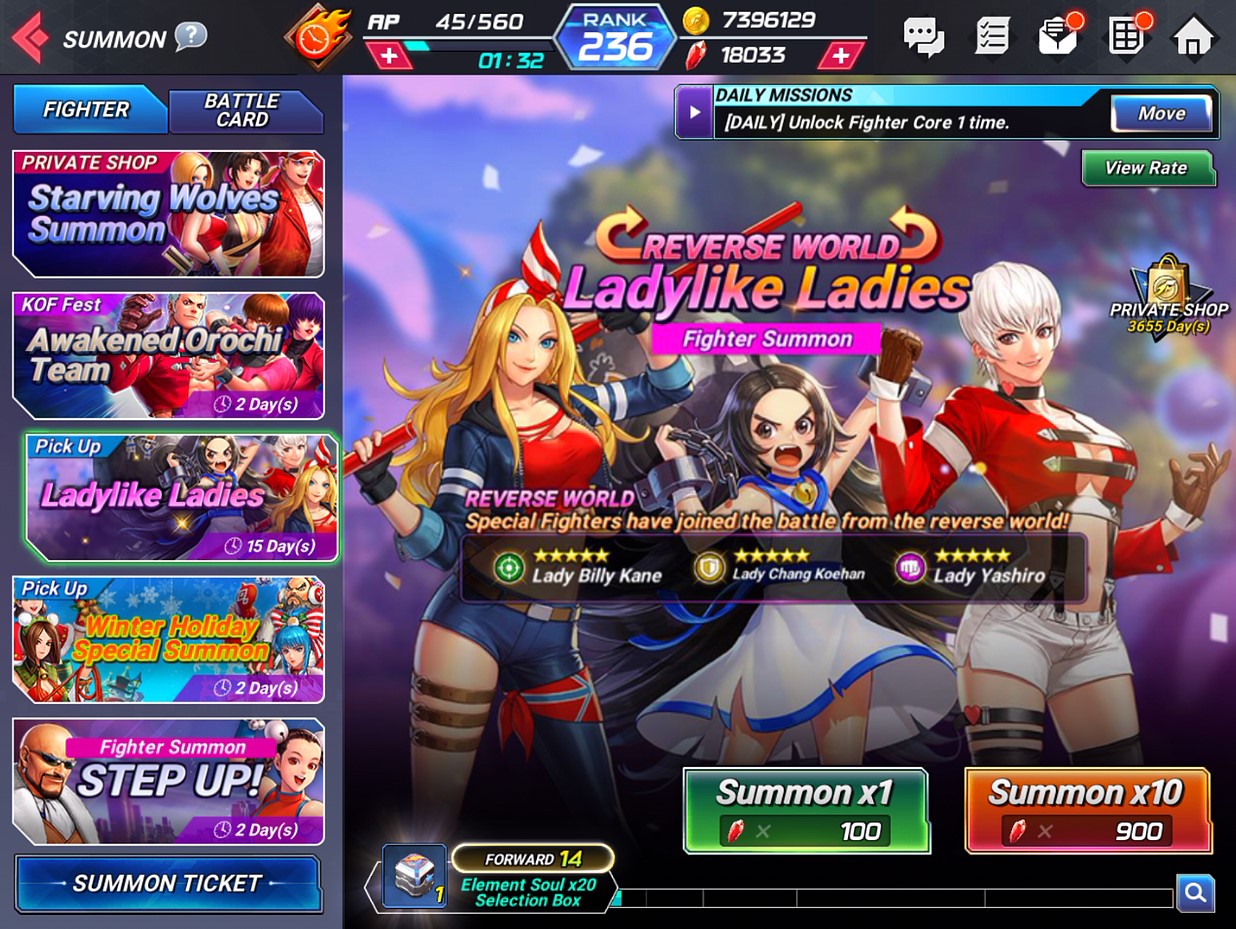 Now I am sure some of you will be tempted to re-roll for really good fighters. Do not worry if you missed a few OP fighters, they will always have banner re-runs unless it is limited.

When it comes to re-rolling, you want to optimize for the best fighters. This process can take anywhere from 20 minutes to 1 hour, depending on your will and concentration. It can be very time consuming if you want to get the best head start.

Here are some good fighters to re-roll for:

Keep in mind that a lot of them are not available unless their banner is up, so the most common ones to re-roll are Orochi Leona and Orochi Iori.

Now Orochi Iori might be a popular pick for re-rolling due to his insane damage in PvE and a rainbow leader skill for attack type fighters with -10% DEF in exchange for +60% ATK. However, his PvP is lacking and if you want to do well in both areas, I suggest the others.

Why? Because he doesn’t have super armor nor damage immunity. Neither does Goenitz. That means they are easily countered by super armor. PvP in league and arena matches give bonus rubies each week, so you don’t want to do too poorly and affect your long term ruby gains. They may get a buff in the future though.

For those that want a quick run down on the re-roll process, here it is thanks to xArceDuce:

Thanks to how the KR buffs basically decided to pass on Orochi Iori, I think it’s best to just update the reroll guide with a new one since Orochi Iori is no longer really even worth the rerolling in the current time. 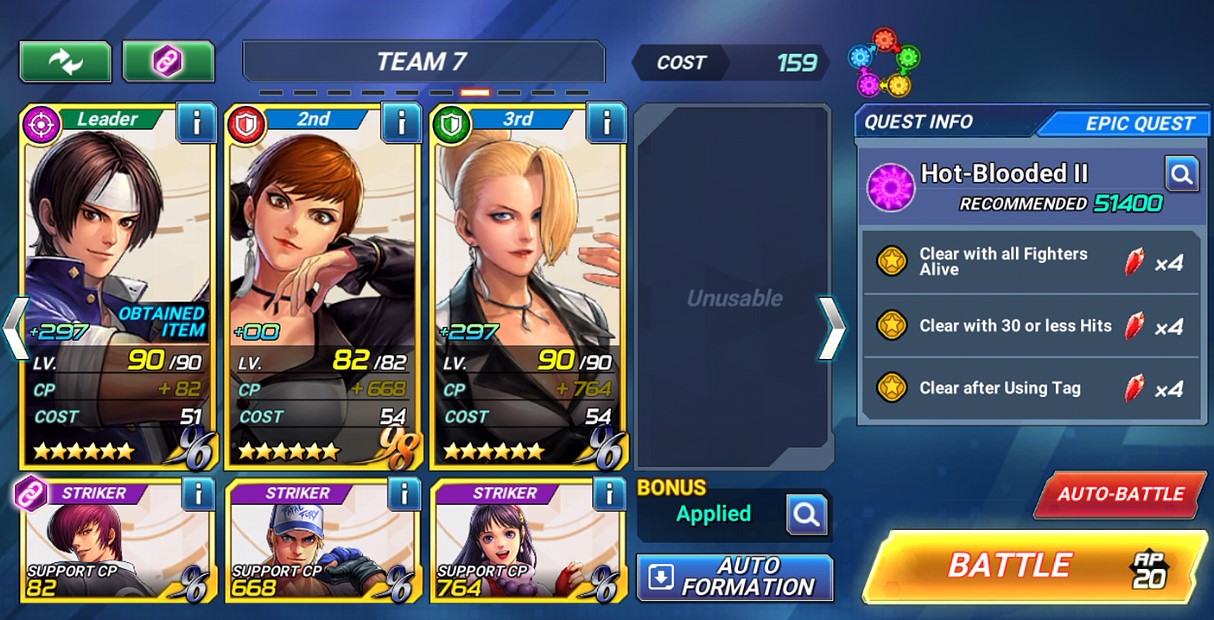 In KOFAS, you get to use most of the KoF roster from 94-99 right from the get go. Early on, you will be receiving 5 free fighters from Growth Missions and Battle Card Mission:

Mature 96 will be a key member of your PvE team later on in Epic Quest against a boss called Hidden Wrath Chizuru with her bleed stacking, so you will want to keep that in mind.

In addition to that, you will get to select a special card, option card and set card upon completing the Battle Card mission:

Now as an F2P player, your ruby gains will be limited and therefore it you want to be highly selective in who you try to pull. In this section we will break down the resources you need in this game. 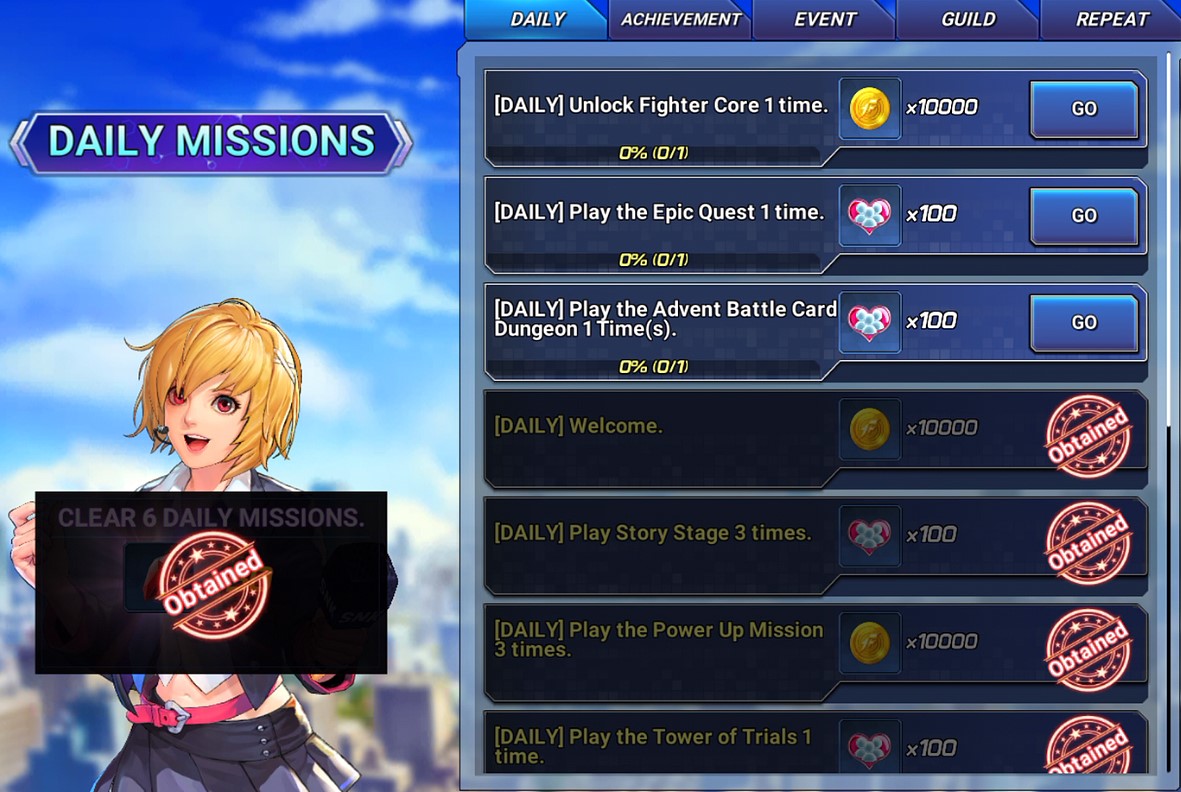 Getting to level 100 and completing most achievements + story mode will net you 30,000+ rubies, which is good for a guaranteed festival fighter summon.

These are the real money currency and are hard to come by for F2P players. Story mode gives the most initial chunk of rubies. Here are the rough guidelines:

Each time you complete a chapter, you get 10 rubies. On top of that, you also get a full objective bonus clear reward per chapter of 100, 150 and 200 rubies respectively for normal, hard and expert respectively.

Then you got Ryo vs Statue and Car Destroying, and that gives a bonus 3000 rubies for all story modes. 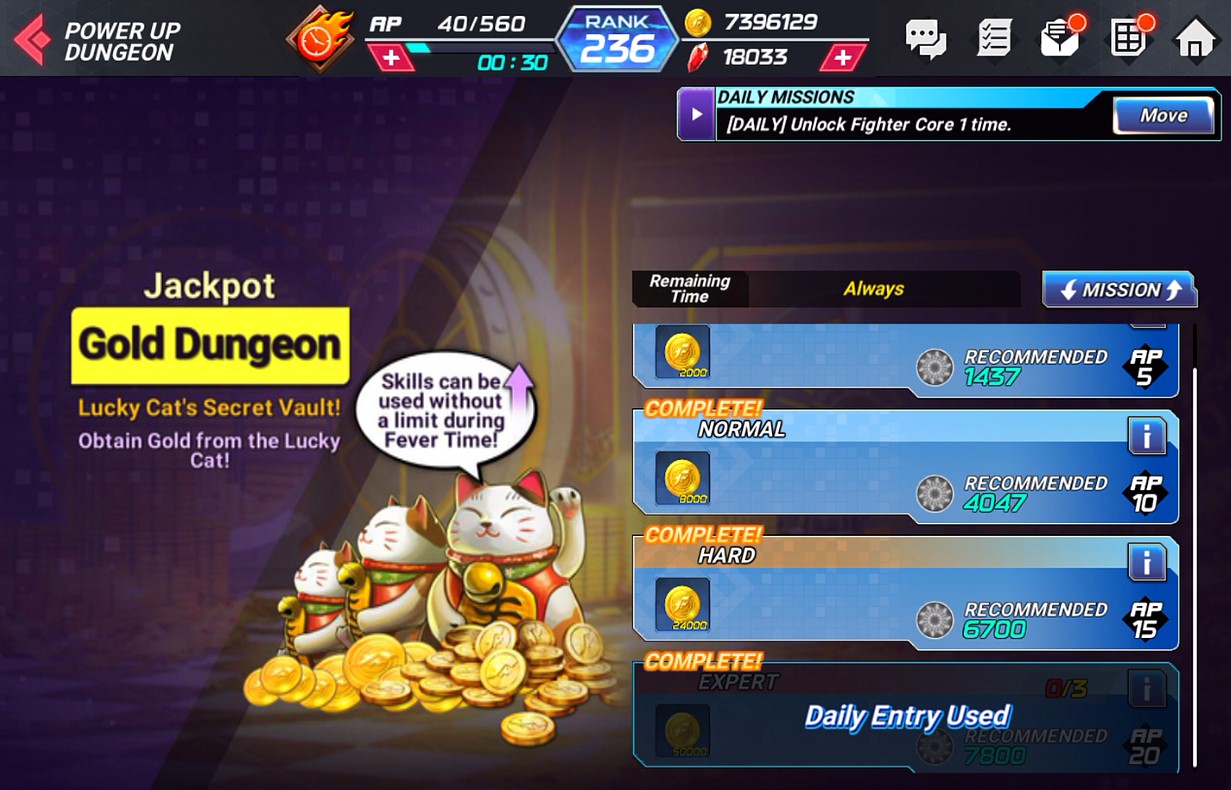 Another resource you will need for limit breaking fighters, upgrading battle cards and crafting items. You can get gold from most events and the gold dungeon.

You get % gold bonuses through the King set, which gives 12.6% more gold. You will need 3 sets of these cards on 3 fighters for the gold farming team.

There are also specific fighters that will give you gold gain % when pairing with certain strikers. They include:

So most versions of Robert paired with a striker from Art of Fighting will have some sort of bonus gold gain. You will want them as your dedicated gold farming team. They don’t need to be max level to work. My gold farming team is only level 60. 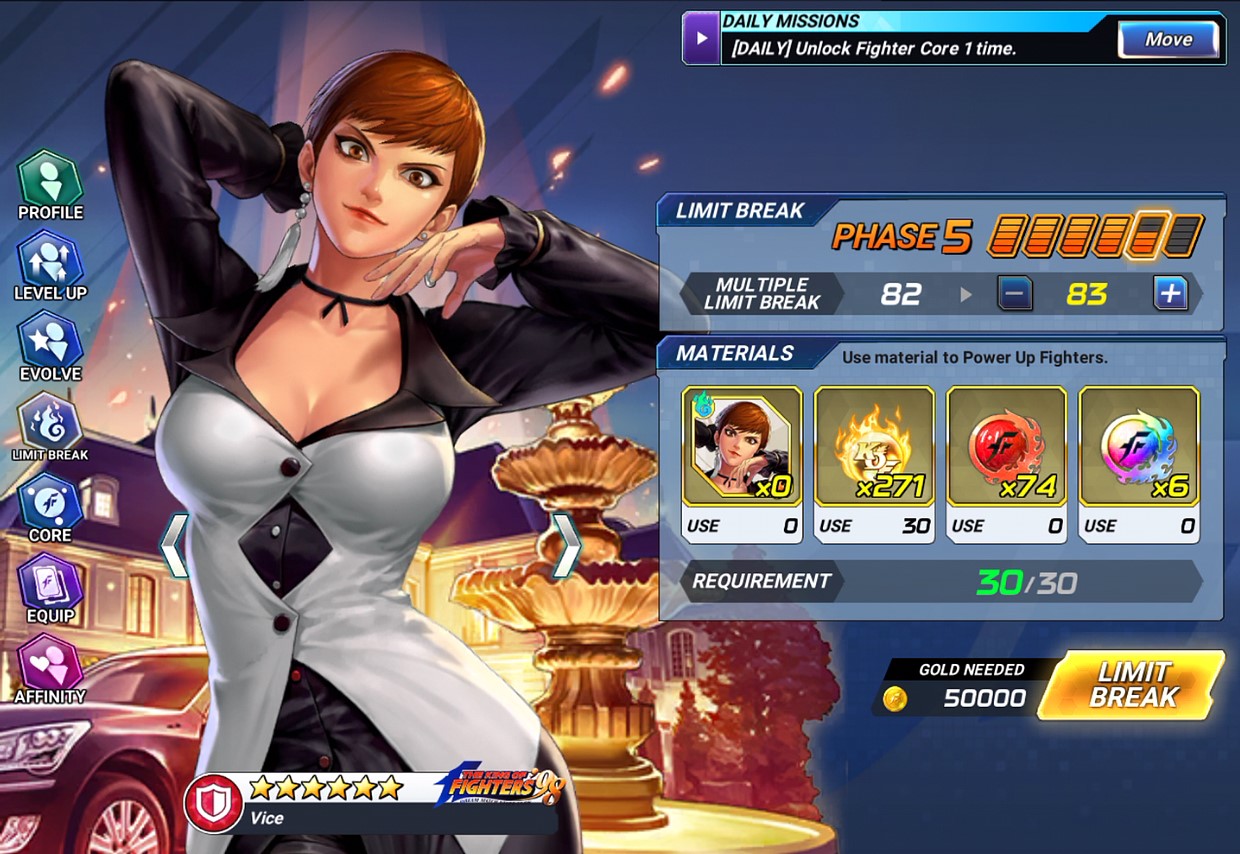 So you can see the gold sink there. Also, the character souls can be hard to get if they are either limited festival fighters or collaboration fighters. Those can only be limit broken usually by either gold AS souls, element souls or rainbow souls.

Always get souls for festival fighters(purple border) via Soul Dungeon.

You can also buy fighter souls from the exchange shop via soul dusts, which can be gotten via selling unwanted fighter souls. 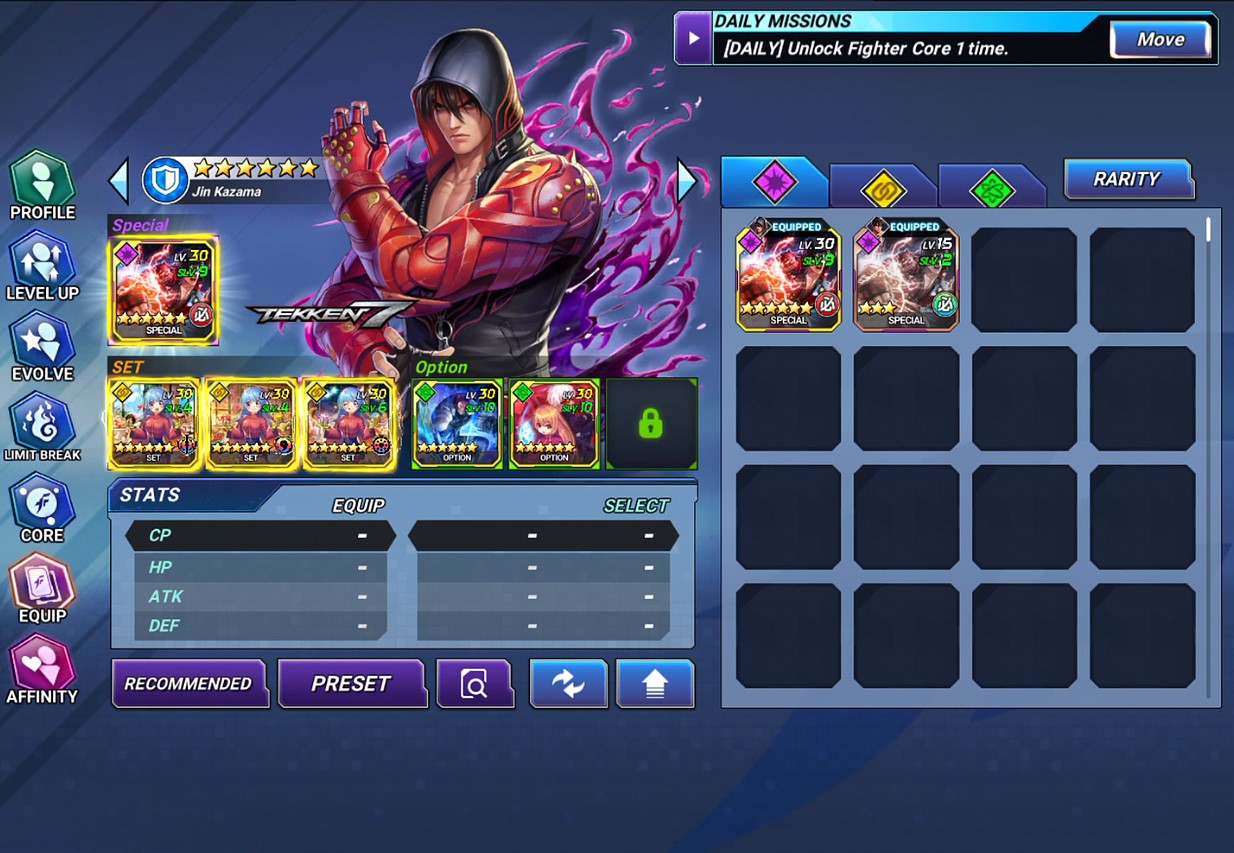 Once you have maxed out fighters, the battle cards is what will make your fighter from good to excellent. There are a few very OP cards that you want for pretty much most fighters.

The 2 most OP cards are the following: 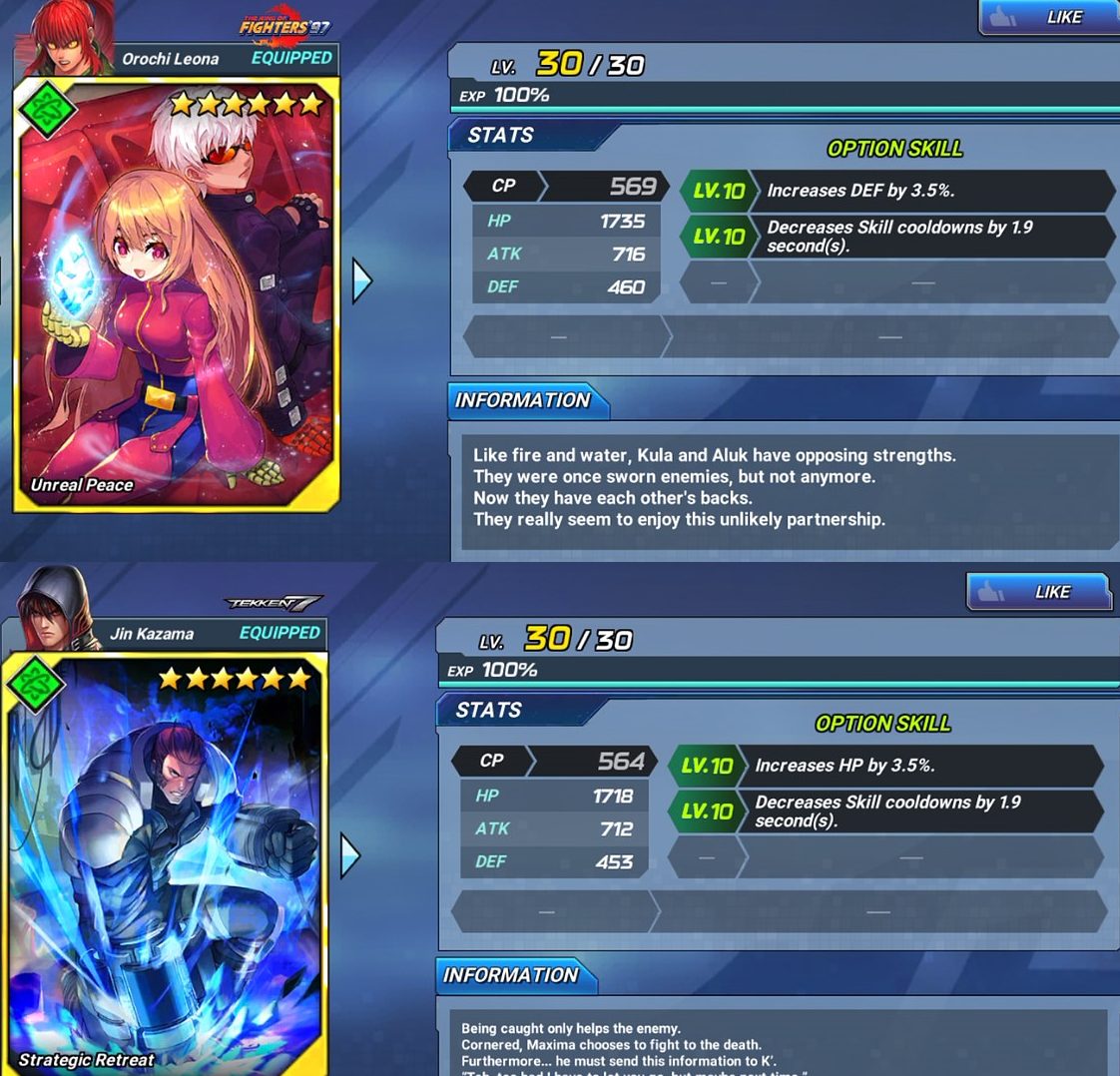 These 2 cards give the most OP stat in the game -> cooldown reduction of skills. Having both cards for any fighter will greatly improve their damage over time as they can spam skills more often. Having both at max level gives -3.8 seconds on all skills!

Some fighters can also do infinite combos in PvE. That makes them extremely OP since once an enemy gets hit its game over unless the person messes up the combo. Some examples are:

Here are some video examples:

For set cards, the most versatile set is the Favorite Things set. It provides 15% attack and bonus 17.8% attack when the fighter crits. Works well very almost all Attack and Balanced fighters.

Stick with this set. Other good sets are the FES sets, but they can only be gotten when the banner arrives and is quite limited.

Other sets like the Sibling Training set is good for Time Attack as it allows characters to spam their ultimates to stop the time counter for faster runs.

Another good set is the Hobbies set. Works wonders for PvE auto mode. Anytime your fighter gets hit, they gain power and it allows them to spam their ultimates quickly. If you don’t have any good 5 star sets, this is the budget set to use.

When enhancing battle cards, aside from using skill enhancement cards, it is best to use 4 star cards you don’t need, skill them up to level 5 skill level and evolve them to 5 stars for the best skill up chances. Below is a chart that will give you a good idea. 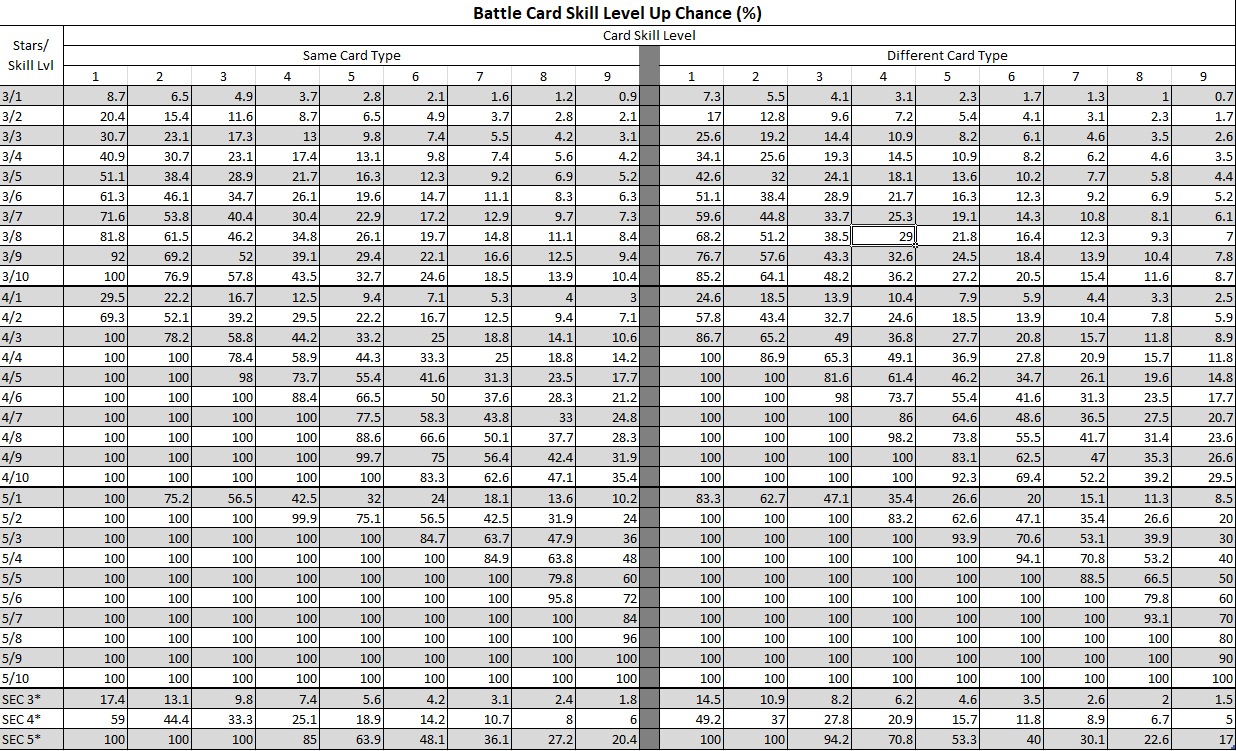 Check out his guide here: https://www.reddit.com/r/KOFALLSTAR/comments/e6fkc3/how_to_upgrade_battle_card_skills_the_right_way/ 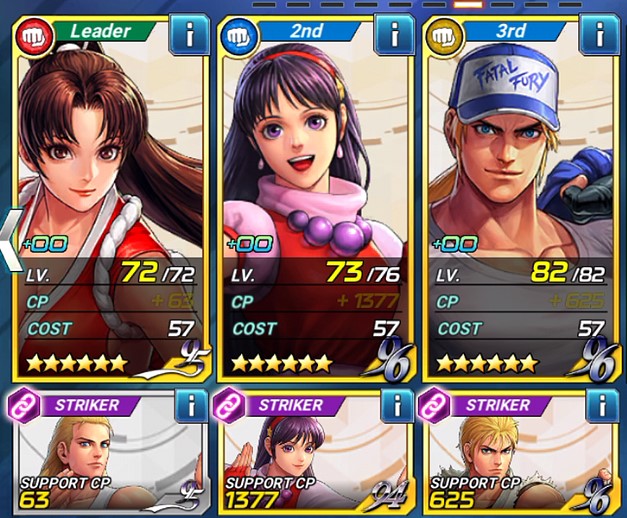 Now at the start of the game, your team building is quite limited since you can’t be building full teams for each element and type. That is more for end game.

You always want to use a fighter with a good leader skill that will benefit the rest of the members. For a list of leader skills, check this page.

What I suggest for early game is to focus on 1 element or type that will get you to end game. For example, you can try and start with:

This well narrow down your focus to only these fighters to prevent yourself from spreading your resources too thin at the the beginning.

If you take this route, I suggest the following pairs:

Mai 95 is the popular pick since she gives 25% attack and hp for attack types. And you do not need to re-roll for days compared to Orochi Iori.

Kyo 95 is also a good pick. Does a lot of damage and does well with Mai 95 to tackle Blue stages.

Yuri 95 and Mai 95 is another good combo. Yuri 95 as Mai 95 striker will give her -2 second cooldown, which is vital to doing the infinite combo.

This pairing allows you to clear all content, including Epic Quest as Kyo 98’s leader skill allows other balanced attackers to have burn damage. Very useful for Epic Quest 0 Chapter 3 and 5, which you will need to clear to get the 3 bar special for Chizuru.

Shermie 97 has the most versatile leader skill, giving 60% attack bonus to everyone as long as you have 70% health or higher. If you are good at dodging, this is the best leader skill.

Andy 98 gives bleed damage and improves bleed damage for green element, which is perfect for Mature 96 and will take care of Epic Quest boss for Chapter 3 and 5-3. Also since you get Vice 98 for free, she can also be a good defense leader with bonus 35% attack.

Chizuru 96 is a super tank that takes very little damage. If you want a safe pick that doesn’t die easily, equip her with Hobbies set and a healing striker and you have a very tanky fighter. She is excellent for Live PvP to troll Attack type fighters.

Tip: I do not recommend going for Defense teams as they take a bit too long to finish most PvE content. Stick with Attack and Balanced types.

Choosing 5 fighters, 1 for each element

This requires a bit more resources, but will pay off in the long run when you cover all elements.

You are going to need either of these as the leaders:

I personally started with: 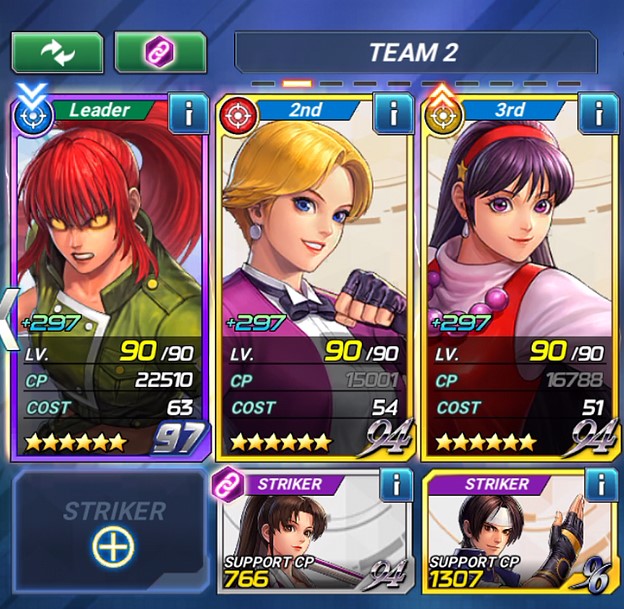 Both Mai 94 and Kyo 96 are free, so I covered all elements with these 5. Later on I was able to save enough rubies to pull the limited collaboration Tekken fighters.

Again, the more popular and easiest way is Mai 95 + 1 Attack Type. No need for re-rolls and she can help clear all PvE content. The only issue with Attack Types are Live PvP. But if you don’t play that mode, then this won’t matter.

Hopefully this gave you a good perspective on what to do in the game. Ultimately, you don’t have to play the game this way. Just pick whoever you like and enjoy it. You will be able to complete PvE content with pretty much any fighter.