Today’s advancement in mobile technology has tremendously changed the way mobile games are perceived. There have been a great leap from games created in the past to what is currently available and the sports genre has benefited immensely from it.

Here are the top free sports mobile games you can start playing right away.

Madden NFL Football is the most popular mobile sports game; it is published by EA Sports. The game gained its popularity on mobile because of what it has to offer in terms of features and functionality. Madden NFL Football comes with a modest graphics, roster with constant updates, easy gameplay and a good weather system.

The game will let you take on weekly tournaments, league and season modes and live events. It also has a marketplace and auction house where you can purchase booster packs or extra prayers to upgrade your team.

Technically, Madden NFL Football manages to bring the feelings and trills of American football to your smartphone. If you are on transit and need to catch some fun, this game will provide everything you need for that to happen.

This game is deep; it brings a new level of mobile gaming experience and changes the way Baseball lovers interact with their teams. The point is that, the in-game experience is so much fun that you’d be put in a lot of hours into it.

MLB Perfect Inning will let you take charge of batting, pitching, and team management. There are also daily tasks that can help in building your skills. You can take control of your favorite MBL team, add players, make deals and a bunch of other things that gives the game life. In fact, by the time you are done, you get the feeling that you have the likes of Mets or Phillies on mobile simply because you can develop your team to look and feel the way you desire.

One of the things you are going to love about MLB Perfect Innings is the immersive team management experience. Your strategy goes a long way in affecting the outcome of the game. There is really little or nothing to complain about this game.

If you have never played baseball and you don’t know the rules, this game will help you get started seamlessly. Thanks to its essential great tutorial system. The complexity of the game will never bring a drop of sweat as you take control of your team. 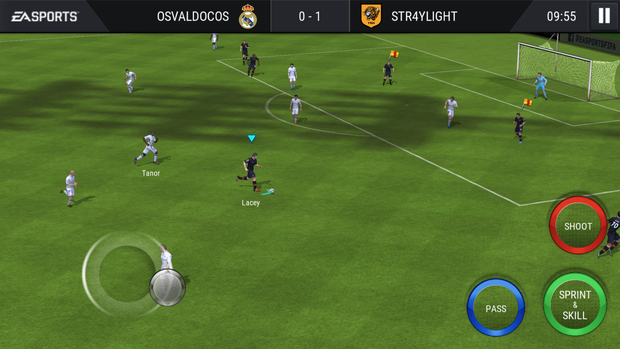 FIFA Soccer has really evolved and it’s the biggest game in the FIFA franchise and also one of the most popular sports games to have hit the mobile gaming ecosystem. FIFA Soccer is big; its scale on mobile shows how important the game is for EA Sports and it’s world-wide reception proves the game has been rightly developed for mobile gamers.

Starting off the game, you get to see decent the graphics. The graphics on FIFA Soccer is by far one of the best graphics you will see on mobile. The game also comes with full roasters of over 500 real teams which is a massive edge over the competition. That’s if there was anyone in the pack.

Going further in the game, you will get to interact with over 10,000 players with some kind of gesture controls as well as new goal animations. Of course, the popular players are built with realistic goal animations while other players are mainly generic.

Talking about the gameplay, it has evolved pretty fast. It is one of the best gaming experiences you will ever have. Everything feels balanced, mastering set of skills and engaging in different types of drills gives the game its unique identity.

FIFA Soccer has two control schemes – on-screen buttons, and a gesture-based system which you can call hands-on and hands-off respectively. Whatever you decide to stick with, it will boil down to your preference. Developers of the game have equally managed to shrink the download size to under 100MB which is another technological marvel, considering the scale and magnitude of the game.

The game delivers one of the best free to play gold experience. You get to explore some of the world’s best courses. The game is built with one of the most amazing graphics you will experience on mobile. Since the game doesn’t have a lot of power demanding features, you can expect the game to work seamlessly across high-end mobile devices and mid-range smartphones.

Players can engage themselves in full 18-hole stroke play games or even get faster with the 9-hole game mode. There is also the popular and fan’s favorite hole-in-one challenges. The beauty of it all is that these game modes are available in single player and multiplayer.

It’s a fermium game, but expect in-app purchases as you continue playing. You can upgrade virtual golf balls to Callaway, Volvik and more. Upgraded virtual golf clubs from Cobra, Ping and TaylorMade are also available. Whether you access the in-app purchases or decide to continue without it, you will still have the best in-game experience.

This is a first class mobile basketball game with awesome graphics and different game modes for a truly immersive gaming experience. The game is fully licensed by the NBA, this helps a great deal in giving it life.

The biggest talking point is the control. On console, it is a masterpiece but having to replicate same feel on mobile without physical buttons is fantastic. You use virtual sticks and buttons, this kind of controls is usually a pain in the backside for many sports games, but it is remarkably implemented correctly in this game. The developers deserves a thumbs up for making a complex arrangement very dynamic, fluid and very comfortable.

This is a demanding game and I pity your smartphone if it’s not a high-end because you are dealing with a monster software. It is one of most technically advanced mobile games that put you right in the heart of the action. With that said, you will be enjoying the best single player campaign and the multiplayer addition further gives the game a bragging right.

NBA LIVE Mobile Basketball is fun, and without a doubt the best free NBA game available on mobile. It requires persistent internet connections and includes in-app purchases. You won’t really get irritated by these, reason being that there are so many things that will take your attention away from them and put you right in the game, especially the all year long daily challenges that keep you going. The game also has a complete team roaster and a lot of team management strategy for a true gaming experience.