Selling champions is a bad idea for many reasons. You might be enticed to sell them for gold or fragments, however, if you obtain a second copy of that champion you’re going to get double the rewards for selling that champion and still have a copy.

And if you get enough copies of the same champion you’ll get a crystal as well when you dupe it, which can get you even more rewards and rarer stuff.

What to Spend Units on

The most important thing to use units on is for two masteries under utilities called Parry and Dexterity. Both of these masteries give you great boosts making you much harder to hit all around which makes the game itself somewhat easier.

And that’ll save you a lot of units on potions and revives and make it so you can use units on harder missions. Aside from getting Parry and Dexterity you want to save up for Precision and Cruelty which gives you a huge damage output boost.

Do not Spend Any Units on Premium/Featured Hero Crystals.

It may seem tempting at first to do this but the drop rates for the Premium and Featured summons are rather low. As you play there are so many ways you can get premium hero crystals for free and make a ton of units towards the mid-end game.

If you’re new to the game what you really need to focus on is your masteries. That’s where your units should be spent until you’ve gotten somewhat further towards the middle or end-game.

Learn to Parry and Evade 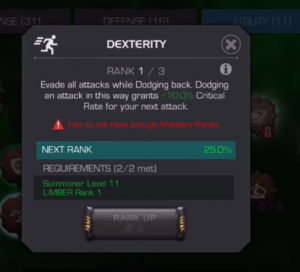 Parrying and evading do take a bit of practice. If you do wanna become pretty decent you are gonna have to practice how to do these things to get efficient with them.

But once you learn them you will be set and be ahead of the curve. If you’re a new player who can master or at least get a good idea of how to do it everything is going to be so easy for you.

Once you make your way through the story and get to about chapter 2 of the story quest you can start doing monthly quests. Every month a new event will come up under the event quests.

These events are limited time missions that give really good rewards for the most part. It’s really important once you get to an appropriate level to prioritize the monthly quests over the story quests.

The story quests will always be there whereas the monthly ones only last so long. So you should get your fill from them while you’re able to.

If you are heavily invested in the game you should put some time into the arena. There are two brackets in the arena, a beginner and veteran bracket.

After your account has been active for a certain amount of time you will be moved automatically to the veteran bracket. In terms of how arena rewards work they are all percentage base.

So if you start grinding early on while in beginner you will be up against other beginners giving you some easier fights to deal with. Especially if you’ve learned Parry and evading.

If you’ve gotten good at those masteries the fights will be much easier and you’ll be able to grind easier against beginner players. Giving you an early lead on arena rewards such as champions.

Spending Money on the Game

The main thing to know about spending money on the game is simple. If you play it a lot and you’re invested then feel free to spend money on it.

However, the best way to do so is to wait for special offers to be in the store. They come up every Monday, Wednesday, and Friday so there are always new ones coming in.

It’s better to buy when there are offers because you can get things for cheaper than normal. So if you’re going to spend money, spend it smartly.

Get Into or Form an Active Alliance

When you get to a point of knowing about Alliances you want to get into an active one. By active that means an alliance where all players have signed in within the last day.

If you can’t find one you could form your own if you’re able and get as many people into it as well. If you can get up to 30 players you can get plenty of rewards for being in an Alliance.

Just be in the Alliance and contribute to it in order to make fast-paced progression. Also being in one will unlock Alliance quests and rewards which will give you more rewards.

This tip is more opinion based than anything but still rather helpful. Check in and keep up with tier lists to see which champions are worth putting time and effort into it.

Focus on Upgrading your Most Powerful 3/4 Star Champions

This basically means playing smart when it plays to upgrades. If there’s a really good 3-star champion or you got a dupe of a character and can awaken them you may want to focus on them.

Once you get 3-star champions you really shouldn’t worry about 2-star champions. Focusing on awakening your 3-stars and leveling up the higher ranked characters is really what should be prioritized.

Hopefully, the tier list will be able to help give you a good idea of which ones are good and which aren’t.