Quake has mass damage, She can hit everybody with no problem and she can issue out slow. Now that slow mechanic can hit three targets or actually more than three, but just in a normal 5vs5 It’s gonna hit three and that gives them – 50% speed but that’s gonna be changed to minus 30 in the future.

Still, think she’s gonna be good. But I don’t know how good we’re gonna see and then her middle ability can clear positive status effects. It helps getting rid of Defense Ups for enemies.

She can give a speed up to the whole team giving the whole team of speed boosts to 50%. That’s gonna change to 30% and there are some stipulations on whether Avengers or not Avengers, but still large and large she’s been acknowledged as being the best character in the game for a long time.

He’s strong in the raids and his passive ability is about “stealing positive effects”. Now that does not work on taunt, and if you can take it all the way to level 5 which is nearly impossible to do those parts are so scarce, you can do 2 instead of one effect.

His basic can clear positive status effects. And he can summon the Ravagers which is really good in the raids. 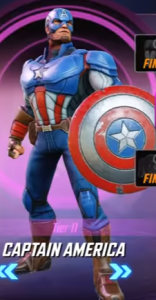 Captain America gains a defense up and gives ability energy. He can clear positive status effects and he can block like crazy. He’s very good for PvE content and paired up with the first three on this list he makes for a great team comp character.

Crossbones is amazing in the arena, maybe not as much in raids or PvE content because when he explodes and does all this monster damage.  He doesn’t have a lot of health and you had to pair him with Night Nurse for him to be really effective.

He’s situational in PvE where you have to focus on healing him up constantly. But in Arena and Blitz, he is a popular character being in most players teams.

Vision is best paired up with other characters, especially Crossbones because of his defense up and taunt. He makes a great utility character and adds support to a team.

Especially when used with some of the characters on this list. He’s a good set up character for others to knock down enemies.

Night Nurse is the best healer in the game having great team comp with several different team setups. Her heal abilities are great, one of her best healing all allies for a large chunk of HP plus 10% of her own HP.

She has a passive heal, an active heal, and is overall a great character to have on any team.

Gamora stands alone on herself, she is the ultimate finisher. She has offense up, fills speed bar, and is a heavy attacker.

Her skill Assassin’s Strike hits 3 times and if she has offense up and the opponent has defense down it will kill them. She is by far one of the best attackers in the game.

Star-Lord’s passive offers 30% damage and 20% speed and It’s beyond good. The Guardians as a team can be a bit harsh without any kind of speed up, but Star-Lords fixes this problem giving allies 20% speed.

Him paired with Gamora makes her insane with her already high damage output.

Paired with Star-Lord, adding 30% damage and 20% speed, along with him being both Blaster and Tech makes him a great unit. And if you pair him up with Vision he’s gonna get defense up two turns.
He has a monster AoE and a burst. Rocket, Star-Lord, and Gamora are great when used together

NEXT [100+] Best Tips and Tricks for Last Day on Earth: Survival