Be sure to watch the video above. We’re gonna go over the best way to farm characters while being FTP. This first section is covering the characters you’re able to get at the very start. 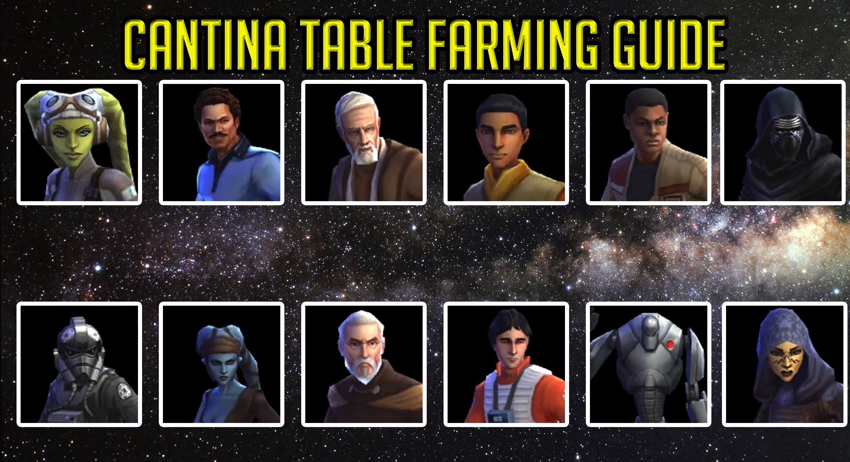 The first place we’re gonna start at is the Cantina Table battle. When you go through the various battles there are characters that you can farm.

And every battle that you do you have a chance to get a character shard of the character you are farming. And if you’re under level 70 you can’t go beyond the 6th level of all these battles.

Below is an image of the characters I believe you should have in your inventory at one point or another. And out of the six the two you should focus on farming the most are Boba Fett and Qui-Gon Jinn. 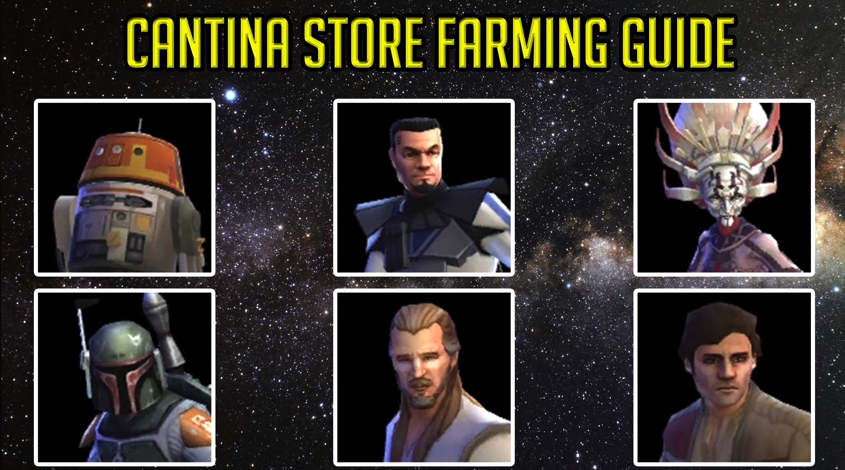 They are two of the most versatile characters out there and Boba especially has one of the best beginner leaders out there. And Qui-Gon is an amazing Jedi character and you can use him in the AAT rate so great characters right here.

Squad Arena is going to be the heart of the game, especially for beginners. It’s where you’re going to get most of your crystals and a lot of these characters I’m recommending are tailored for you to make the best arena composition at your level.

And every single day at your payout besides crystals you will also get squad arena currency. Below is an image of a all the characters I think are the best in this particular shipment. 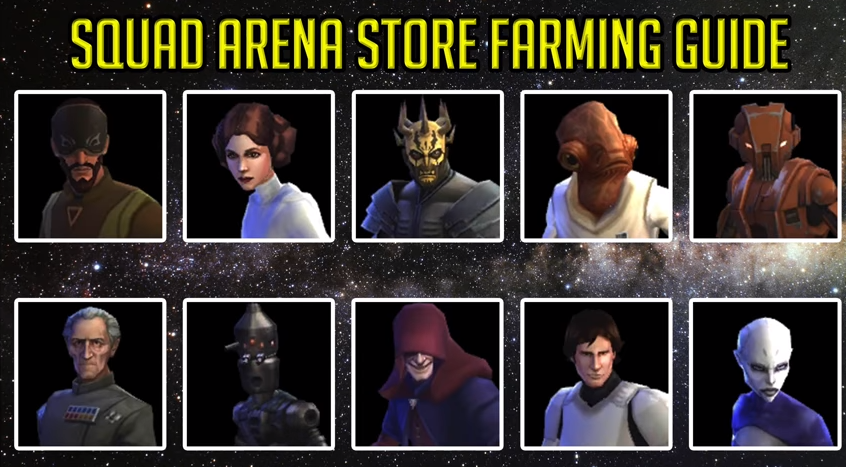 The best characters you should be farming out of this list are Kanan Jarus which is needed for the Thrawn event. If you can get Thrawn early in the game you will be in a great position. 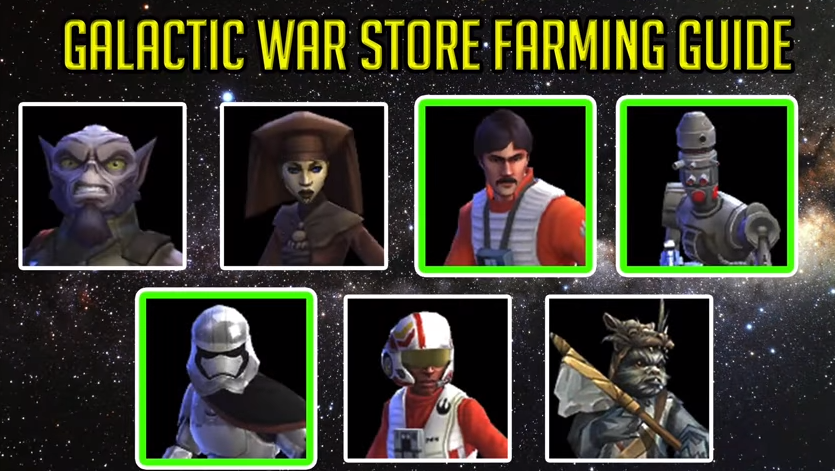 You unlock this at level 40 and if you can clear Galactic War every day you can farm characters extremely fast. Hypothetically the fastest place to farm because if you clear it every day you get to beat all the teams that you face you should get 1200 galactic war currency which translates into 15 shards of a character per day.

And if you get Biggs and Wedge that is one of the most deadly combo’s you can have in this game. Captain Phasma is one of the best all-around Leaders.

Kind of like Boba Fett, her leadership applies to every single character that is behind her. She can call random allies to assist which is a great mechanic for beginner players.

And Luminara, although she loses a lot of viability towards the end she is a really important healer until you start getting passed level 7 there are a lot of better options out there. The next few sections are gonna be the slower farming sections of the game but still viable.

You unlock Guilds at level 22 and once you join a guild you can start earning currency through the raids. And with that currency, you can use it for the guild store.

This is going to be a harder farm because characters rotate randomly, they’re not always there like other sections of the game. Every time the game refreshes they change so it might not have the characters you’re looking for. 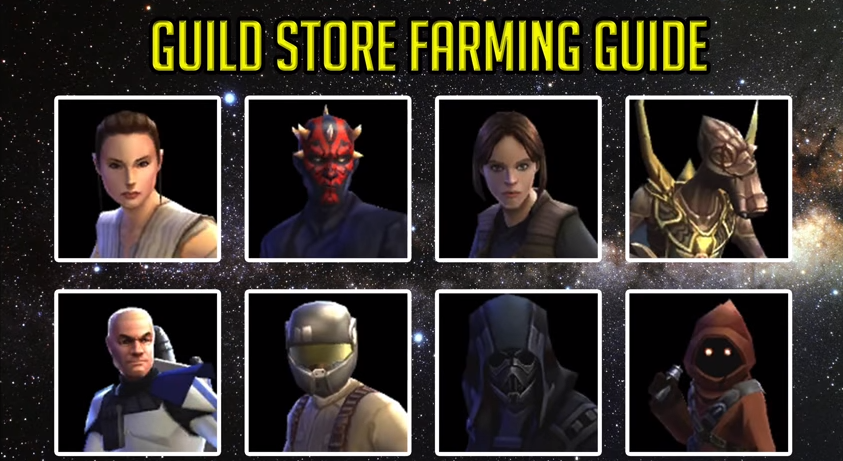 With that said there are some really good characters you can get from the guild shop. The image above outlines the best ones you can obtain.

There are a lot of great characters on this list but we’re gonna focus on the core characters to get. Scavenger Rei is an amazing character for all kinds of players, she’s super fast and does great damage.

Darth Maul, really great sith but he loses viability once you hit R2-D2 but before you see enemies with R2 his leadership is amazing for Sith. He has an AoE daze which works under leaders like Boba Fett and he deals great damage.

It’s best to focus on one or two characters on the list above to farm because of how long it’ll take. But the ones listed above are some you should focus on.

You unlock Fleet Arena at level 60 and like Squad Arena you compete in your ships. And every day at the payout you get fleet arena currency and there are only 4 characters I recommend farming out of this location. 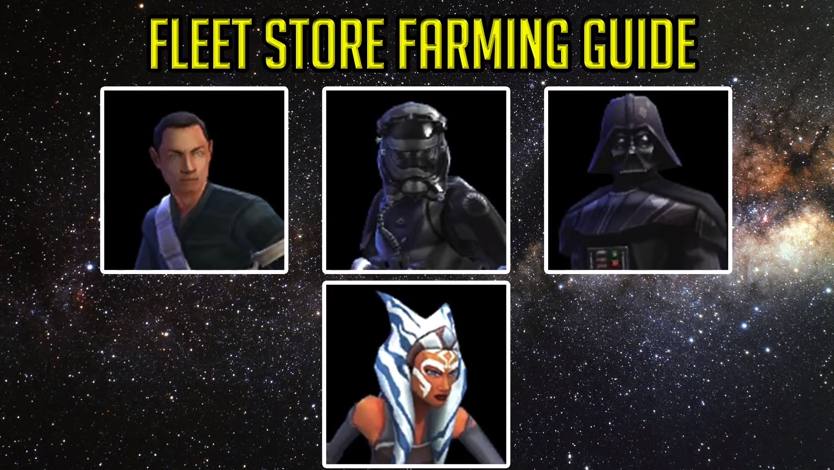 The core characters listed above are Chirrut Imwe, Darth Vader, and Ahsoka. But no matter what you do I highly recommend you get Chirrut Imwe.

He is one of the best characters in the game and if you can get him you are in for a treat. And of course Darth Vader you wanna farm him and you will get a lot of shards for him from challenges in the game.

As for Ahsoka, she’s very optional in my opinion but she can be used for a lot of instances. But no matter what you need to farm Chirrut Imwe out of the fleet store.

In the guild event store, you’re going to run into a lot of repeat characters that you can get in other sections of the game. But there is one character that you can’t farm easily unless you do a hard battle farm but that’ll take months of time to do.

That character is Beys Maldis. Aside from that, you can also get Hermit Yoda or Wampa but I don’t recommend farming them until you get Beys. But once you do you wanna go ahead and farm Yoda and Wampa. 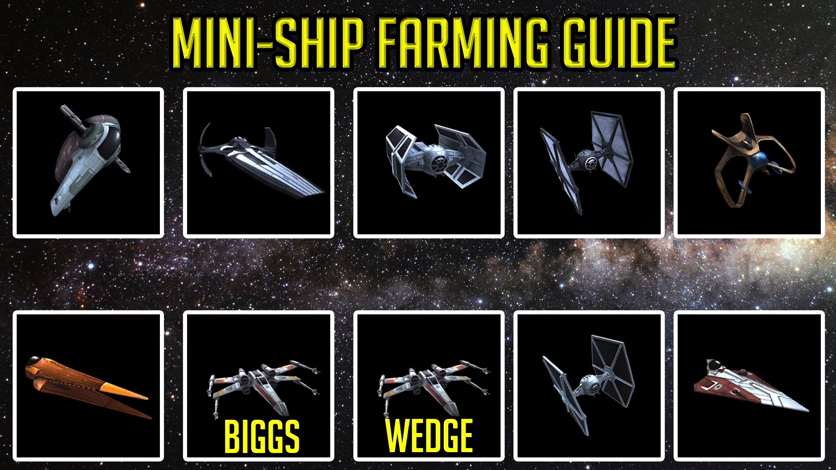 Ships are becoming a more important part of the Galaxy of Heroes. Character farming should be your main priority in the game but there are some ways you can get ships as well.

The core of where you’re gonna farm ships is Galactic War and the Fleet Store. So my recommendation when it comes to ships is to farm the characters that I’ve recommended.

Then once you’ve gotten the core characters go and farm the ships that you can find in that store. So once you farm everything in the Galactic War store start farming the ships.

cool guide.
her name is *Ahsoka, not Asoka though.

cool guide. her name is *Ahsoka, not Asoka though.