On the main screen of Onmyoji, there is a Bonus lantern. You can tap this to see all the EXP Buffs you have available.

When not using a buff you need to make sure that you have it paused. When the buffs bar is red it means it’s paused and its yellow when its active.

At the beginning, you may not have any which is fine. You’ll get them through events or buy them in the games general store. 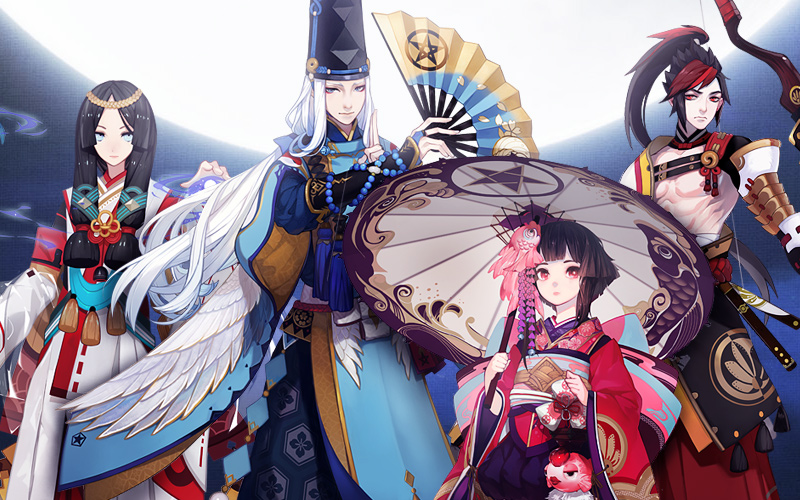 This next part is about the best places to grind for things like Experience, Coins, and Souls. The best place to do it is in the most difficult chapter you currently have unlocked.

If you find yourself having trouble completing the chapter then going back to a previous one to grind there first isn’t a bad idea. Some of the best chapters to do this on are Chapters 2, 4, 11, 16.

Chapter 2 and 4 are good for beginners because they drop an item that is very good for your DPS units. But before you go into farming you want to decide on what units to focus on.

When it comes to farming you wanna make sure you have units that are going to be effective at it. If you have any SSR units you’ll be inclined to use only them but you may not have ones fit for farming.

The best things to look for in a farming unit are ones that have an AoE(Area of effect) attack. That way they can hit all enemies and end the match quickly for faster farming.

Some of the better farmers are units like Ubume and Kuro Mujou. Kuro Mujou is unlocked after chapter 9 so you can get him for free.

Equip Your Team with Souls

Before you go into farming or any fight, in general, you want to equip your units with souls. Souls are equipable items that increase stats and give bonuses to units.

So going through your souls and units to find which ones fit for who is a good move. Especially for farming, you’ll need to know what souls will give the best damage output for your DPS farmers.

Clear Map and Boss for Rewards and Glory

When farming you’ll want to clear the map of all enemies so you can make the boss appear. The boss isn’t the focus for farming but defeating the boss can sometimes get you a treasure chest once the map is done.

Treasure chests can hold a lot of different items. Typically AP, but also things like gold and summon tickets so be sure to get to the boss every map while you’re grinding for the bonus rewards.

Dailies are a good way to get bonus items and rewards in Onmyoji. They aren’t to difficult to complete, just simple tasks you do every day for the same rewards.

You can get things like a Demon pass or Jade from dailies so be sure to remember to complete them each day. The amounts are small but over time they add up.

When you start playing Onmyoji you’ll want to complete the tutorial as soon as possible. By doing the tutorial you unlock a bunch of new quests that can get you all kinds of items like Jade and coins.

Once you reach a certain level the Guild feature will be unlocked and you’ll want to join one as soon as you can. Being in a guild has a lot of benefits within the game.

If you’re in an active guild the Guild leader will buy most buffs for you so you’ll not have to worry about that. If your Guild is really active you can benefit from the Donation function.

Donations are where Guild members can post up items they’re looking for and don’t have. And if anyone in the Guild has that item and doesn’t want or need it they can donate that item to the member who does want it.

It’s a good way to get some of the more difficult items you may want. As long as you’re in a friendly Guild with a lot of active members

Set up your Realm.

Once you’ve joined a Guild you’ll be able to set up your Realm. The purpose of Realms allows you to put your Kekkei Cards in the realm.

The cards mostly give your Shikigami experience anytime you collect them. So this is going to help you level up your units faster.

So you want to entrust a unit to a friend or Guildmates card because it’ll give you additional income. Whether it’s more coins, AP, Jade, etc.

The daily events are special quests you can do that give you extra rewards for completing them. Just by participating in the daily event gets you rewards even if you don’t actively do anything within the quest itself.

There are even events that only work on the weekends which you should also do for the same reason. The rewards are worth it.

You should also do Duels which are events where you fight other players. Even if you’re a new player, cause even if you lose you can still get items for losing.

Stuff Worth buying at the Mall

Things you’ll want to buy at the general store at first is AP. You can buy AP and each time you do the price is going to increase.

Amulet Packs are a really good deal if you wanna use your Jade on summoning. Using Jade for amulet packs instead of straight summons is a better use for your Jade because it’s a cheaper price for more summons.

Next up, if you’re low on coins you can use Jade to buy coins but you can get coins through farming fairly easily. It’s an option but not something you’re required or need to do.

Lastly, the Permanent Jade pouch will be unlocked as you play. If you’re playing this game long term you’ll definitely want this. It costs 666 Jade but it generates 5 Jade every 6 hours slowly giving you currency so you’ll make more over the long run.

When it comes to most things in the general shop you really just need to buy whatever you think you’ll find useful.

The main thing you wanna watch for in the shop every week is the Black Daruma. Everything is kind of secondary to that Daruma.

The Black/Skill Daruma is really good for skilling up your Shikigami. So you wanna keep them for really good SSR or SR units.

So that’s one way to skill up, the other way is by fusing two identical units together. So it’s better to get skill Daruma’s and skill up that way.

Figure out Evo Mats you need then farm them

Next up, you want to farm for evolution materials to evolve the units that you wanna use most. I highly recommend to team up with someone in chat in a guild to help with them.

Evolution missions will cost you 6 AP every time. But if you’re teaming with someone it’s only going to cost you 4 AP so the game is really trying to encourage players to socialize.

Before doing the evolution quests you need to look at the units you want to evolve and make sure you know what materials to farm. The next thing to remember is the Soul Dungeons.

Soul Dungeons are quests you can do to get souls for your units. The soul dungeons rotate throughout the week so the kind of souls available changes every day.

Stock up on AP for later use(Optional)

So it’s a good idea to stock up on AP so you can save it for the day the souls you want are in rotation. Having a lot of AP at once lets you do a lot of farming all at once.

And be sure to use any AP items you buy before they expire. You want to claim them before their expiration date otherwise you’ll lose them.

So when dealing with the Orochi dungeon you’ll want to play through it til you can unlock the hard mode. When you unlock hard mode you can get 4 star soul sets as rare drops.

Hard mode can be difficult but you can grind your units through farming and get that soul in chapter 2 and 4 that’s really good for DPS units.

Next, we’re gonna go over which R units are good to keep around. The first one would be Zashiki which you can get for free upon completing chapter 2.

You definitely wanna keep her and any copies you get from summons to help her skill up. She’s very useful to beginners but also for mid to late game players.

The next unit is Yamausagi. Again, if you get copies of her make sure to keep them to help her skill up. She’s also going to be very useful in PvP because of her Bunny Dance move which can only be unlocked when you evolve her.

The last one is Shuzu. Shuzu is very popular in the Arena or PvP area in the game. She might fall short in the future but you can use her in a lot of the PvP content so keep her around for that.

And also keep copies of her to skill up and evolve her as soon as you can. So those are the 3 main R units I recommend to keep around.

A few others you may want to keep are Tesso, Samurai, Hitotsume, and Ame Onna. These units are also good in PvP and can be helpful in the early game.

Special Thanks to Beast Mode! Check out his channel for awesome Onmyoji tips!