The input mechanics are mainly point-and-click. The player controls a single character and can interact with NPCs, objects, and entities in the game world by left-clicking, or selecting an option from the object’s right-click menu, since many objects can offer more than one interaction option.

Due to the game’s simple interface and gameplay mechanics, OSRS has a relatively low bar of entry as opposed to RuneScape or other more complex MMOs. Coupled with the fact that there is a large free-to-play section of the game, it is a popular first game for players that are new to online games.

The first initial release was on 2001. Despite having a smaller staff and a slower relative update schedule, Old School RuneScape had more than twice the active players that new version of RuneScape had by 2017. A mobile version of the game for Android and iOS was released on 30 October 2018. 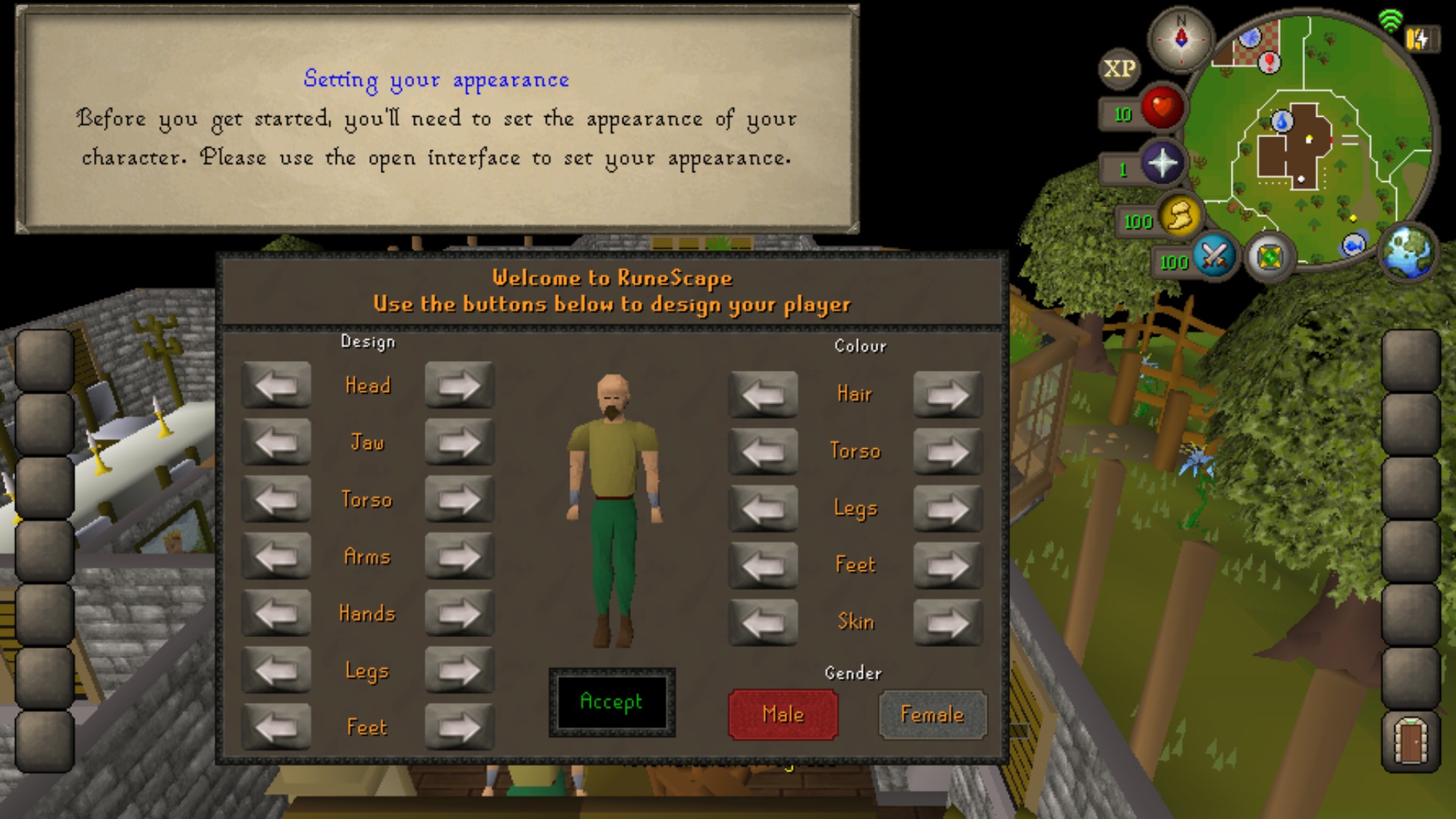 After creating an account and logging into the game, you can choose your character appearances and gender. Once you have customised your character, your starting location would be at the Tutorial Island. Pay attention, read and learn what the game is about to offer you. 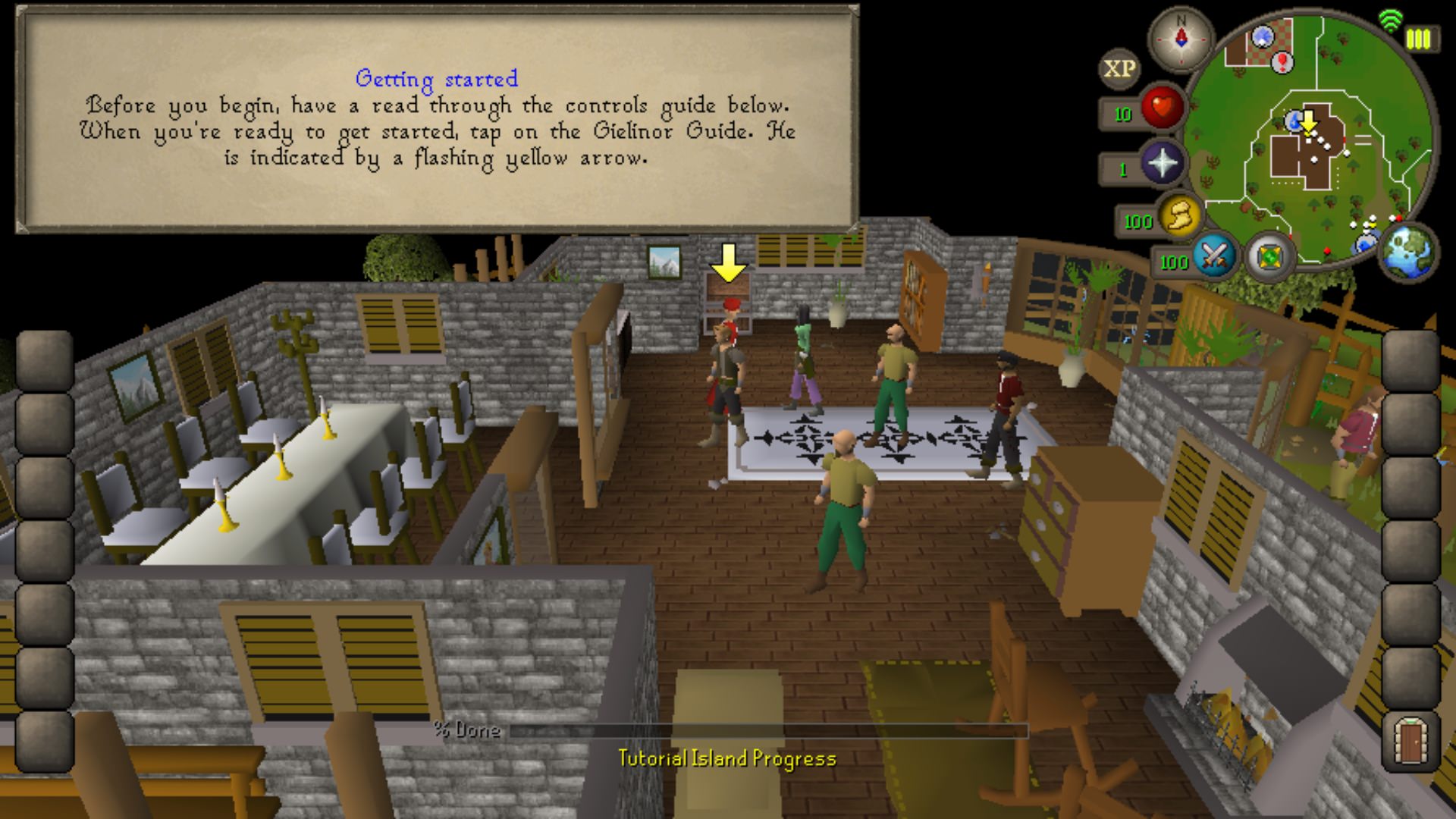 Follow the tutorial instructions and head into the destination. The first instructor you meet in the game will be teaching you on how to use the skill – Fishing.

Start with fishing a shrimp from the pool by tapping the flashing arrow. Talk to the Survival Expert next and he will provide you a small fishing net. Open your inventory on the right hand side of the game to view your items.

Players can earn new skills and experience points by doing the task. There will be new unlocks in the higher levels. Talk to the Survival Expert once you have completed the fishing tutorial to move on.

Talking to the instructor will give you a bronze axe and tinderbox. Cook the shrimp you have caught earlier to complete the tutorial.

In order to do so, you are going to need logs which you can get from cutting trees with the woodcutting skill with an axe. Light a fire by tapping the tinderbox, then the log.

Tap the shrimp on your inventory then tap the fire that you have just made to cook the shrimp. Moving on, you will learn more about cooking.

Speak with the chef and he will teach you on how to make a bread. Receive the flour and water from the chef by talking to him. 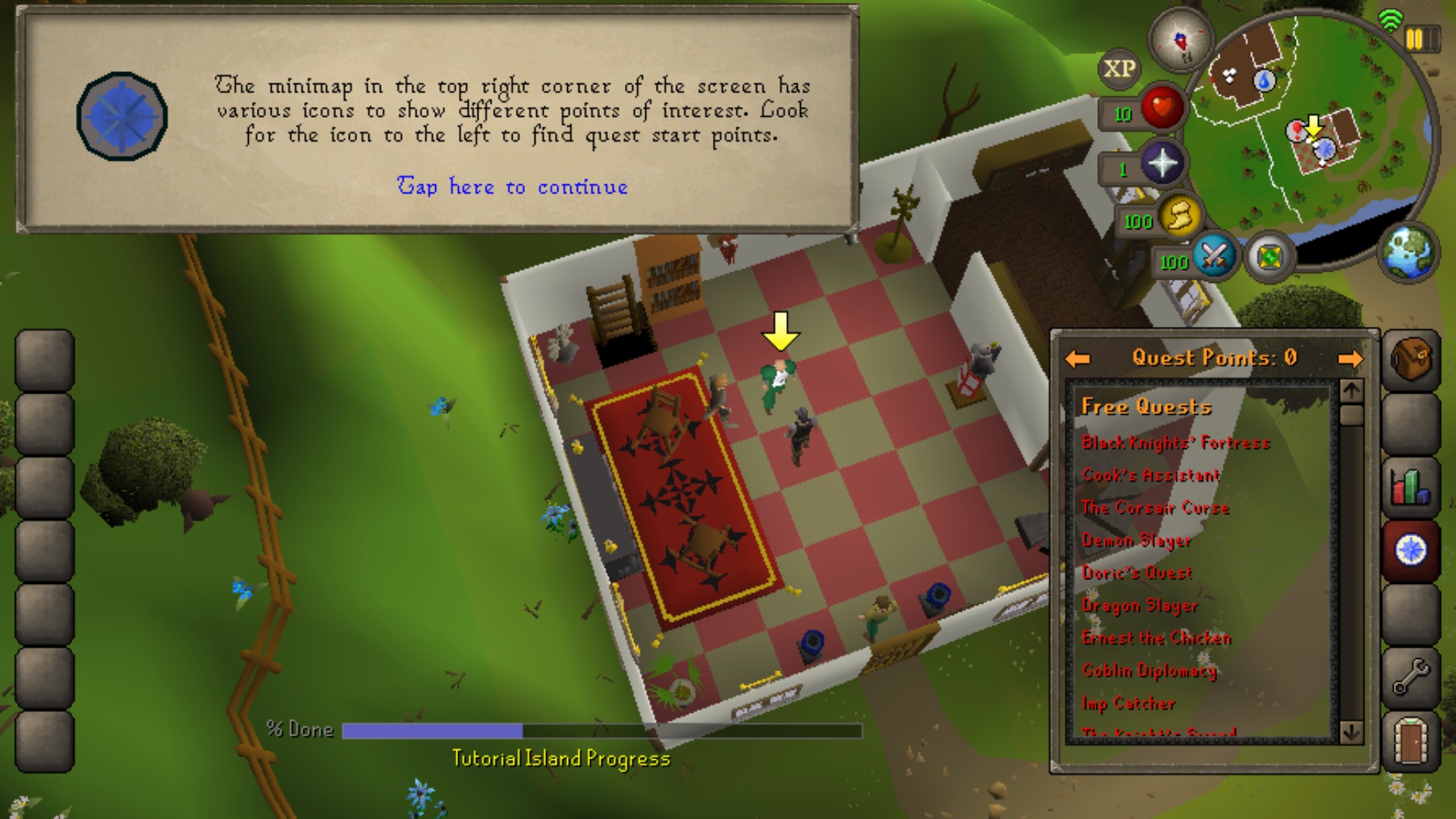 To toggle walk or run, simply tap on the boot icon on the top right of the screen, next to the mini-map. It takes energy to run and it will slowly regenerates whenever your character is not running.

Remember, you can rotate the camera view and zooming in or out to have a better view. You can also tap on the mini-map to move your character easier.

By opening the quest journal, it shows every quest in the game. Talk to the quest guide for explanation on how it works.

If a quest is colored red, it means it has not been started. The quest changes to yellow whenever you have started it and once completed, it turns into green. This is so you can easily see what is completed, what is started or what is left to begin.

Tapping a quest will display more information, if you have not start a quest, it will tells you where to begin and what requirements are needed. If the quest is in progress, it will remind you what to do next.

It is fairly easy to look for quests, look after quest icon on the mini-map. There are different type of quest around the RuneScape world, from collecting beads to hunting down dragons.

Completing quest rewards you all sorts of things such as new zones/areas and better equipments. Moving on into the tutorial by entering the cave with the ladder.

Dezzick the mining instructor will give you a bronze pickaxe by speaking to him. Tap the rock to mine it, if you are unsure which rock is which, tap and hold then select prospect option to find out.

Mine copper then smelt tin ore and copper ore into bronze bar. Just like making a bread, just simply tap the furnace and it will begin the process.

Tap on the anvil and select the dagger to smith and voilà, you got yourself a dagger. 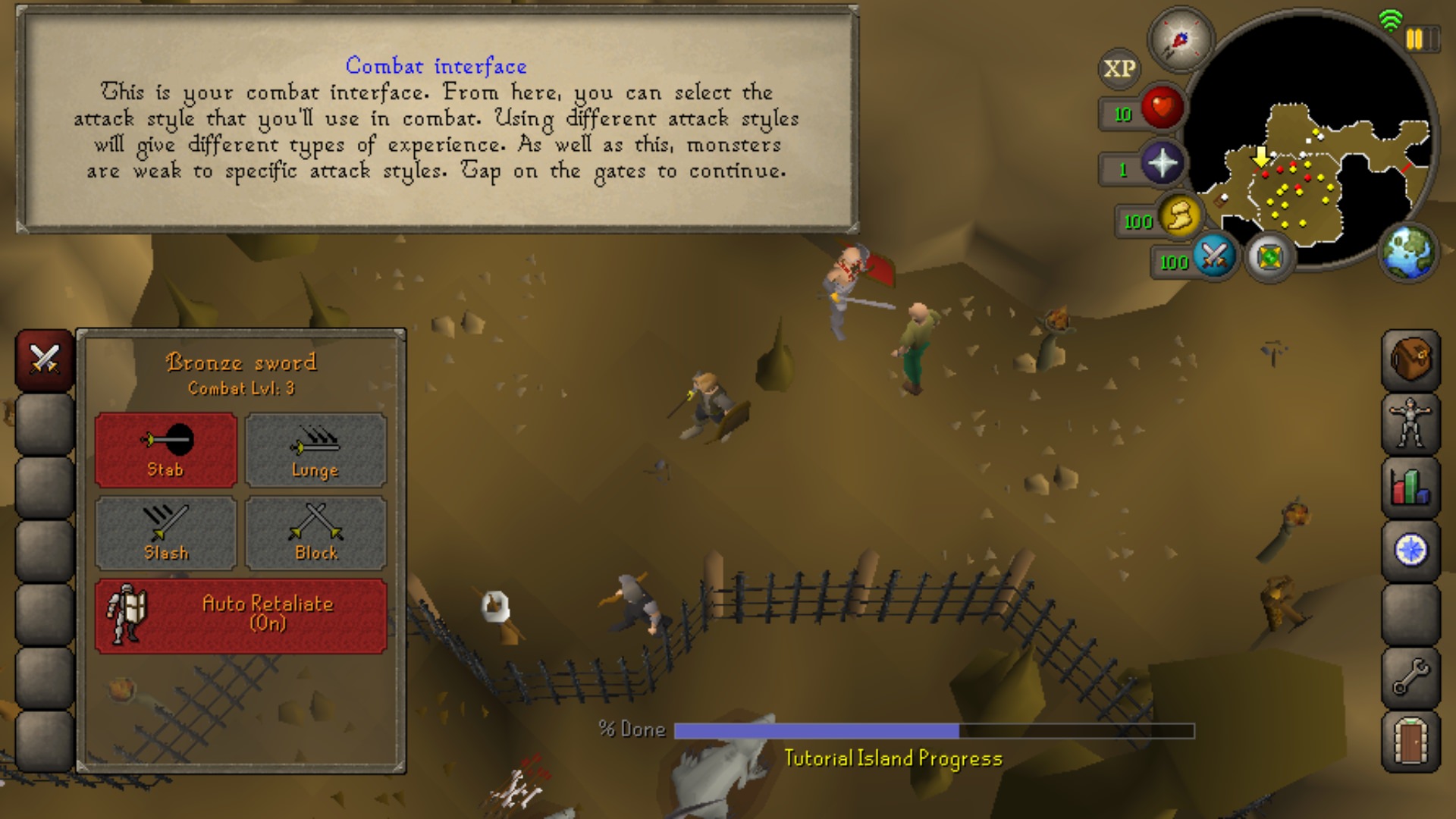 This is what you have been waiting for. Vannaka, the greatest swordsman alive will teach you both melee and ranged combat.

Equipping your weapon by opening your inventory and tap the dagger. Talking to the instructor after you equipped the dagger and he will give you a sword and a shield, equip both of them to move on.

Combat interface, from here you can select the attack style that you will use in combat. Using different attack styles give different type of experiences.  Monsters are weak to specific attack styles so it is quite important to keep switching.

To attack, simply tap on the enemy target. Talk to the instructor again to learn ranged attacking, equip bow and arrow then attack the monsters.

Tap on the booth to store items. Deposit or withdraw items by tapping on it. Poll booths are also found within the bank.

In poll boths, you can vote on future game updates to decide whether each update should or should not be released. Voting is open to members with skill total of 300. To preserve the old-school character of this game, an update must gain 75% support to be released.

You can also manage your account on the bottom left of the screen. All account are free but if you desire, you can purchase membership to unlock members’ world and benefits which gives extra skills, zones, quests and more content. You can also purchase Bond using your gold to buy membership without spending any real money.

Enter the chapel to learn more about prayer. Prayer can help a lot in combat. Active prayer can drain your prayer points, which can be recharged by finding an altar or other holy spot and praying there.

Tap on the prayers to activate or deactivate them. Most enemies will drop bones when they are defeated. By burying the bones, you will gain prayer experiences to increase the level of the Prayer.

It is very important to make friends in games like Old School RuneScape. You can either add people or block people that you dislike and check which friend of yours is online in the list.

This is the last instructor of the tutorial. Talking to the instructor will give you some Air Runes and Mind Runes. All spells requires rune to cast them.

After killing the chicken with windstrike, speak with the magic instructor to complete the final tutorial and teleport to Lumbridge, the first major area.

Congratulations, you have completed the tutorial. If you would like, you can find the Lumbridge Guide to get some ideas about where to go next.

He is holding a staff with a question mark on the end, white beard and carries rucksack full of scrolls, you cannot miss him. There are also many quests and tutors that are willing to teach you more about the many skills you could learn. 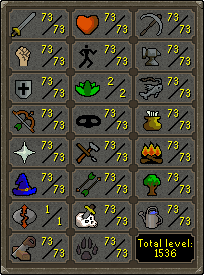 Every skills in the game has their own experience and levels. By leveling them you get stronger and has new unlocks. You can get experience by doing the tasks.

There are 23 skills in Old School RuneScape but 8 of them are only available for members.

Attack – The higher the attack, the higher the accuracy that you would land an attack. Higher attack level also allows you to equip higher level melee weapons.

Strength – Increases the amount of damage you would deal on an enemy target.

Defense – Allows players to wear stronger armor and decrease the chance of being hit.

Ranged – Allows players to attack from a distance with projectiles or missiles.

Prayer – Players can use different type of prayers to boost their abilities in combat.

Magic – Can cast magic to deal damage to enemies or other spells such as teleportation. Requires rune to cast.

Runecrafting – It allows players to craft runes for their Magic. Runecrafting is accessed after completing the Rune Mysteries quest.

Hitpoints – Hitpoints can be trained from combat of any kind – melee, ranged or magic. It determines how much damage you can take before death.

Crafting – Allows players to craft items such as pottery and ranged armor.

Smithing – Smelt ores into bars and smith bars into armors and weapons.

Firemaking – Firemaking is only necessary when the player needs to cook raw food. It’s not that important.

Woodcutting – The player can cut logs from trees, either to sell, or to use for making fires.

Agility – Allows players to use shortcuts.

Fletching – Allows players to make bows and projectiles such as arrows and bolts.

Talk to other players or beginners in the game in Lumbridge. It is important to make friends in the game because it will be a lot more fun to play with friends or in a party than being alone. It makes the game more enjoyable.

Feel free to look around the mini-map and complete the quests. Here are some of the quests that you should complete, it gives ton of rewards for your character. Click on each quest for guides. Credits to diabetesHERO! for providing the quest list.

You should able to complete all these quests in less than a week, depending how much time you would spend playing the game.

You should also start training your combat level. Start by killing chickens, they are low level and easy to kill. Try getting Level 10 for each of your melee attacks. After this, you can move on into training on Cows. They drop both bones and cowhides. Cowhides are quite valuable.

Bury the bones you get from defeating chickens and cows. You get prayer experience points. Collect everything you can and you can sell them for gold. It’s important to have gold on you.

Remember to keep every valuable things you have in the bank. You do not want to lose it and you are going to need more spaces when you are grinding skill levels or questing.

Take it easy, take it slow and have fun! Invite your friends and families to play together. I hope you enjoyed reading the guide and do not stress out while playing the game, take a break if needed.

Please do let me know in the comment section below about what do you think or if there is any useful beginner’s tips that I missed!

NEXT 5 [Simple Steps] to Get Rich in Roblox