This guide is based on Fishdix’s video. It’s a tips and tricks guide that goes through the basics of the game to help new players be fully Free to Play players. 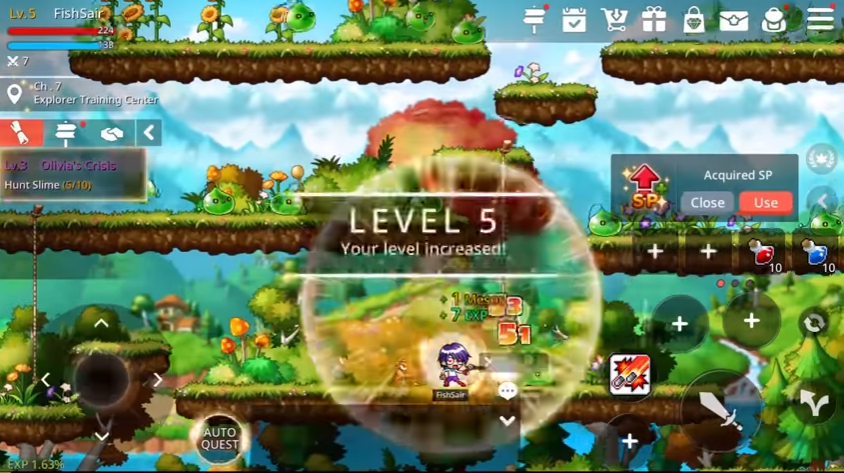 Being a Free to Play player means never spending any money on the game itself. And you absolutely don’t need to in Maplestory M.

The biggest sink with money is usually in ways to upgrade and enhance your equipment. But you don’t have to worry about that for a long while into the game.

You can do all your story and all your questing on basic equipment with no problem. And by the time you reach the level and spot in the game that you’ll need better equipment, you’ll have enough Meso’s to get everything with no problem.

Meso’s are the in-game currency you get just by fighting mobs and doing quests. It’s probably the most valuable resource in the game so you don’t want to end up miss spending your Meso’s.

Another thing about equipment is that the game itself will encourage you to upgrade your equipment early on. It will introduce you to the mechanic and want you to learn how to use it properly.

What’s most important in this aspect is your weapon. Your weapon is very important because it’s tied directly to your class.

There are different weapon rarities that you’ll run into throughout the game. And you don’t wanna waste time and resources on a low rarity weapon. 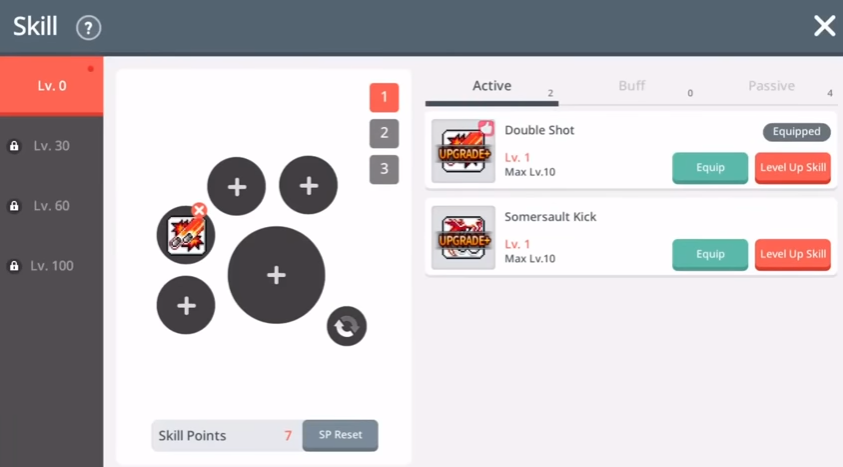 In the beginning, you’ll be given a lot of things for free and give you a good idea of the basics of the game. You’ll get character skills in the early quests due to how quick it is to get early level ups.

Skills are important because they’re your way of doing more damage and really pushing yourself through grinding. Upgrading them is simple but much like equipment, you don’t need to upgrade immediately when the game says you can.

But you’ll also be given things like free pets and items as well. And these are important for the overall game experience so having them so early is a nice touch.

One thing to note is about actual questing. If you really want to speed things up then you can do it manually and your results will probably be about 50% faster.

The thing about Auto-Quest is that in Maplestory M it can be highly ineffective. Auto-Quest and Battle are convenient mechanics in the game for sure allowing you to just sit back and let the game grind for you. 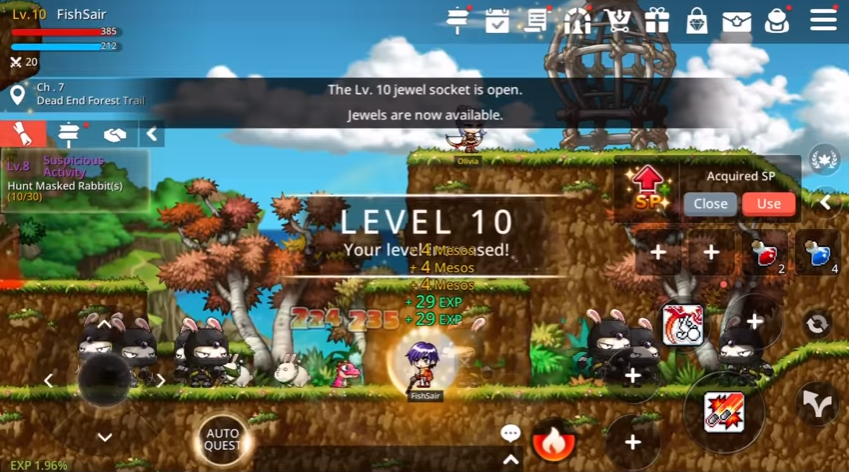 But when it’s on Auto the A.I is extremely dumb and actually works slower than you would normally. For questing, it’s essentially just throwing the game on auto-pilot and letting it walk wherever it needs to be for that quest.

Then with auto-battle, your character will only ever use its basic attack. It doesn’t use any skills or any buffs, specifically sticking to the basic attack.

And that slows down you leveling up because it’s much faster and more efficient to kill mobs with your skills. So overall, if you want fast results then just play the game normally and enjoy the grind. 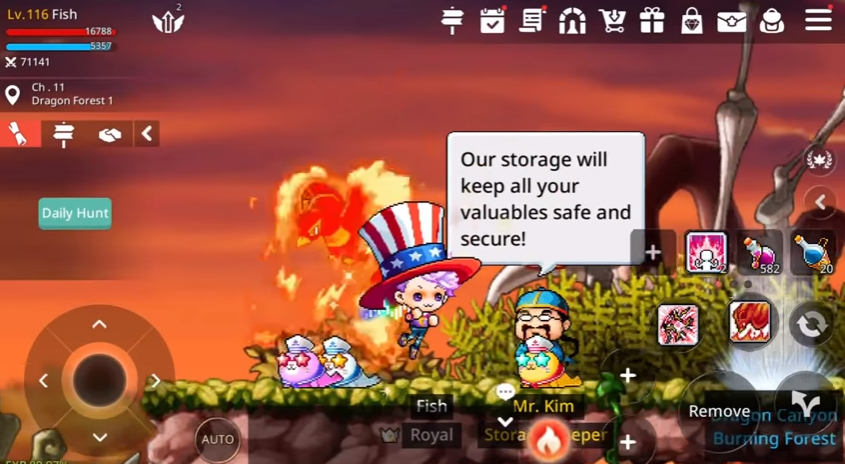 The first thing to go over about Maplestory M and XP is the ability to get Rest XP. This is something that stacks up when you log off.

You can stack up to 100 points then you can cash them in as XP when you log in every 6 to 8 hours. This gives you about as much as you’d get from auto-battles so it’s a much more efficient way of getting some XP with little to no effort.

The next method of free XP is through the Guild Banquet. You go there for 30 minutes a day and can gain XP Just by standing in there. 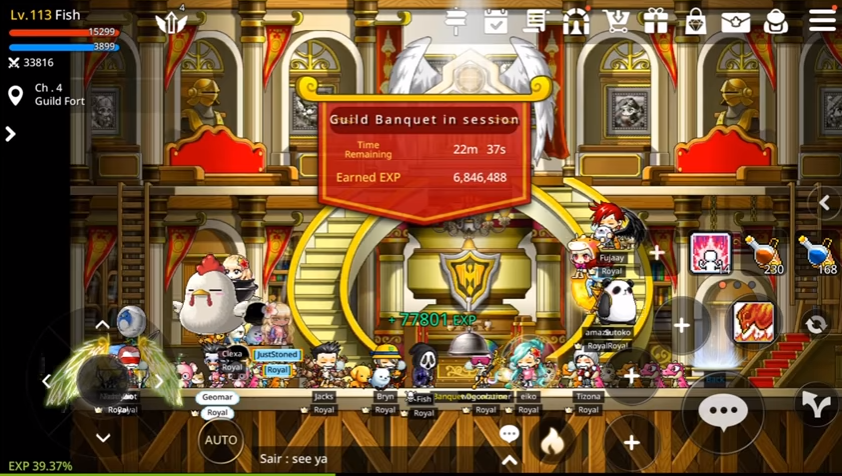 It’s another great way to gain rest XP by doing nothing. 30 minutes a day, just stand in your Guild Banquet hall and gain XP.

Then when you leave you can go back to doing normal rest XP. Maplestory is all about giving bits of XP to progress and every little point counts.

Next up is the Daily Hunts. They’re a lot like quests but they’re not quests because they focus on giving XP. 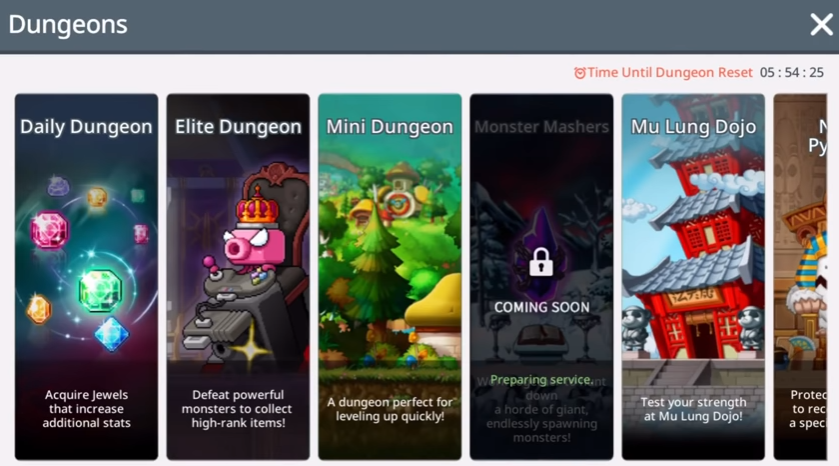 Essentially you’re going to do hunts every day that are killing mobs and gaining XP. That’s it, you get XP by killing mobs.

Then there are other dailies like Dungeons. Do your daily dungeons, get your tickets. Do your Elite dungeon, get your ticket. Do all available dungeons every day and profit. And you’re grinding both XP and gear at the same time. 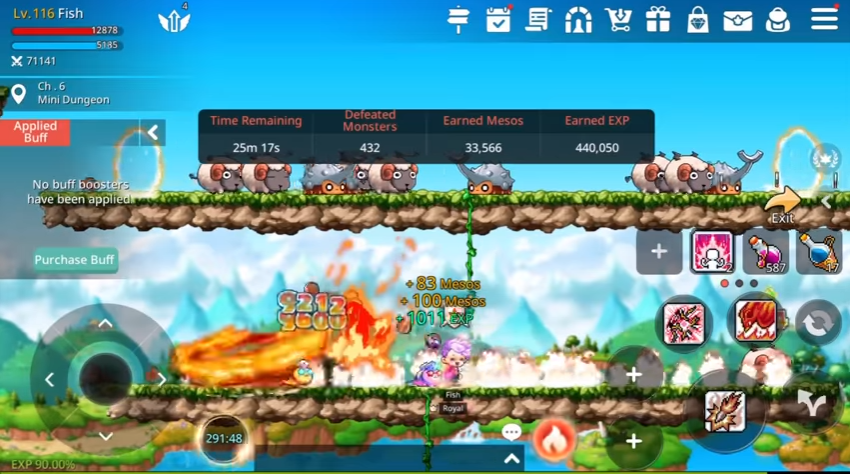 Auto-battle does nothing but basic attack and Mini Dungeon is easy. You will most likely never die especially if you’re one hitting them.

So just go into mini-dungeon, throw on auto-battle, and just let it go. Don’t even worry about focusing on your phone just let it go 30 minutes at a time.

Another bonus to Mini-Dungeons is getting Maple Leafs. You need to get a lot of them every day and they take forever to get. Mini-Dungeon is a great way to farm them where you get to do absolutely nothing.

Only use auto-battle in Mini-Dungeon. Everywhere else that involves grinding do it manually you will benefit far more that way. 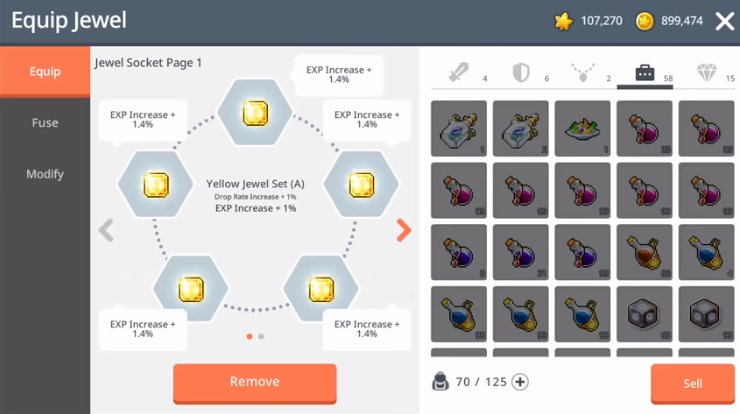 First, we’re going to start with jewels. Jewels are a special form of equipment that gives different stat boosts depending on what jewel you have.

You can have up to five jewels equipped to your jewel page and their boosts stack if they’re the same kind. EXP Increase jewels are a good kind to use in order to get a little bit further a little bit faster. 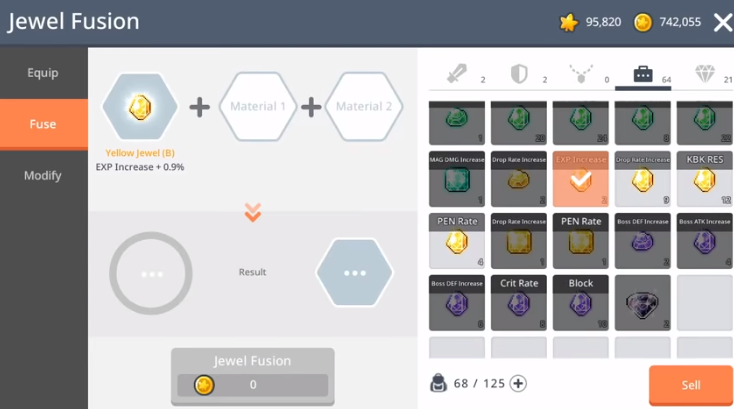 You can fuse your jewels by having one base jewel and others of the same color. By fusing them you’ll get a better jewel and if you succeed it’ll be the same kind of jewel as the base.

Fusing your jewels is how you make them better and more effective for you. It costs a bit of Meso’s to fuse but it is worth using them. 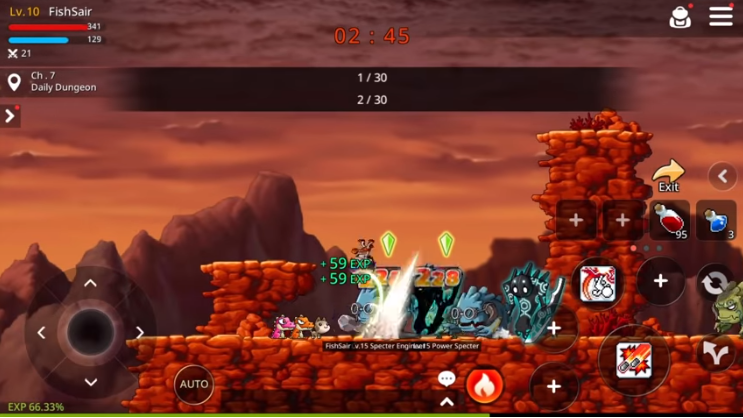 But of course, you have to have jewels in order to do any of this. And you can get all your jewels through the Daily Dungeon.

The difficulty determines the quality of your jewels. Easy gives you smaller jewels, and they get better as the difficulty goes higher.

You can save the free tickets given to you in order to use them all at once together. That way you can save them for the weekend and choose any of the daily dungeons you want to go into multiple times.

Armor is most important for your defense stat and doesn’t really affect your efficiency in killing enemies. But Armor has a lot of stat bonuses and set bonuses that affect a lot. 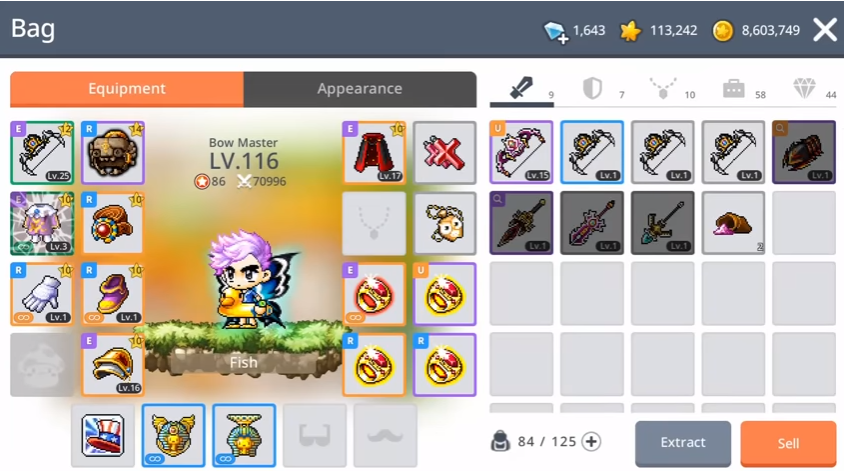 When it comes to Armor you wanna focus on the defense it gives and other bonuses but never focus on anything that boosts attack. Focus on your weapon with that and let your armor focus on protecting you.

You want to focus on building your armor to help you through questing until you get to endgame stuff where you’ll focus on potentials. But with Armor, your biggest focus needs to be finding good Set bonuses. 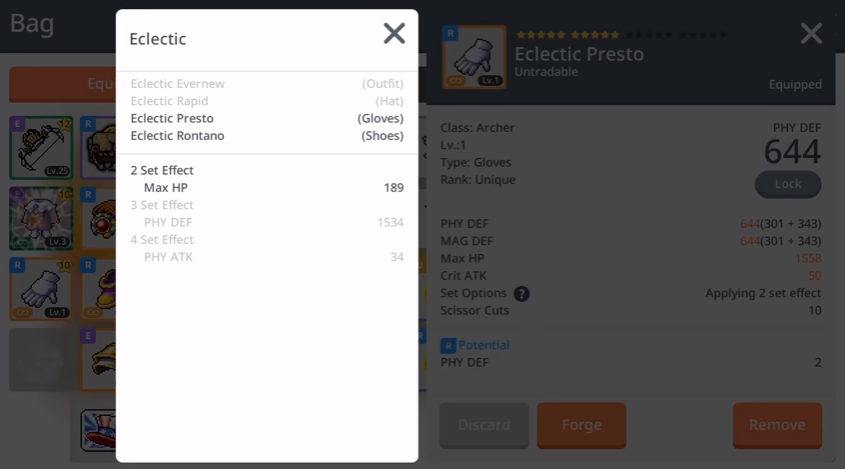 The big issue with Set bonuses is having all the proper pieces in Set. You can have the entire armor set and think you’ll get the Set bonuses by wearing it all but that’s not always the case.

So you’re going to have to upgrade equipment until it’s all at the same rank in order to get set bonuses. This is where the importance of upgrades and enhancement comes in.

So to say officially. Gear does not matter nearly as much as your weapons do, yes it is important but weapons are more important.

The next part of the armor topic is where to get your armor and how to upgrade it. The easiest place is in the Trade Station but before you worry about that or do anything you wanna focus on getting to level 95. 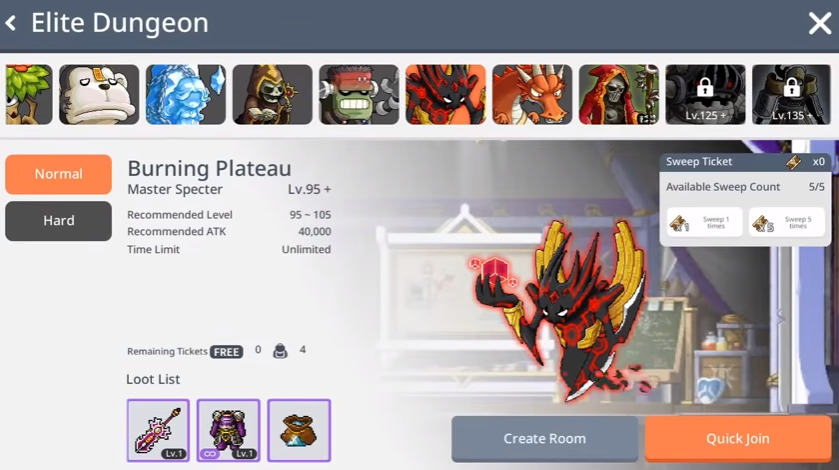 Once you reach 95 you unlock access to your first Epic Dungeon where even on normal mode is gonna give you Epic gear. So even with basic gear and weapons just wait to do any heavy lifting for better stuff.

It takes a few days to reach level 95 and the ability to get better gear then is far better and easier than lower levels. You don’t even need to be worrying about better gear until you hit around 95 anyways.

With the Epic Dungeons, you’ll get at least 3-4 Epic gear or weapons a day. So you’ll have more than enough going for you once you reach this point.

But what do you do with all the extra gear? You’re gonna need material to upgrade your gear and to do that you need powder.

You can’t infinitely farm powder but you can farm Mesos’s. And farming Meso’s is easy, so don’t sell your gear.

Instead, feed it to the forge when you run out of powder. Use it to enhance your gear instead of selling it.

The last thing I’m going to say, do not use your leaves in the leaf shop on Powder. It’s finite and wasting your leaves on them is pointless.