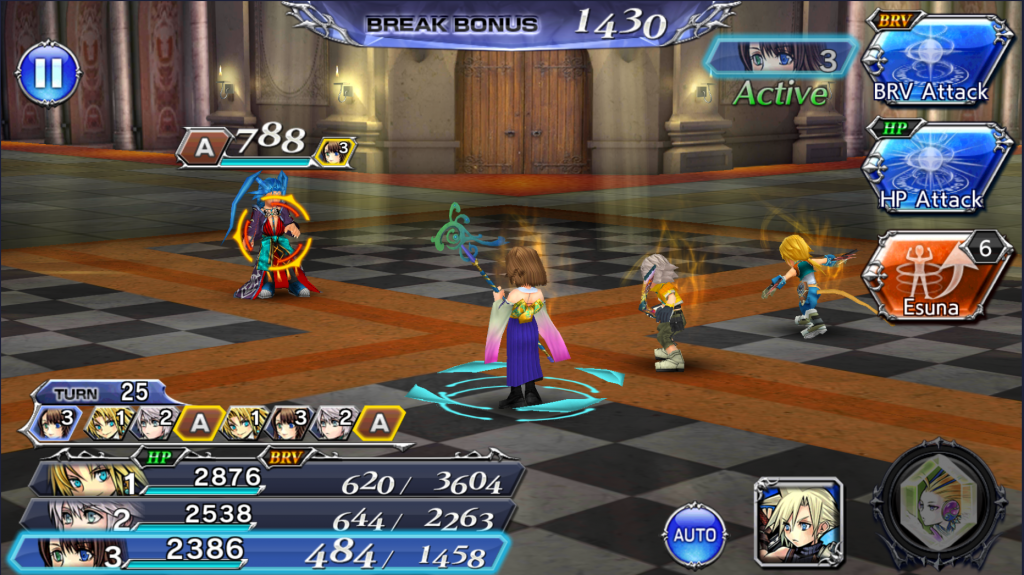 Having played a lot of Dissidia: Final Fantasy Omnia Opera (DFFOO) recently, I have a few below here that is quite similar to it. Have a look!

The player assembles a party of up to five members consisting of the main character Tyro as well as various named and generic Final Fantasy characters. With their party, the player visits various worlds from the Final Fantasy series, and progresses through the game by clearing the dungeons within “Realms”, which are each based on its associated Final Fantasy game. While in a dungeon, the player may not change party members, equipment, or set abilities. Each dungeon consists of one or more locations, which have one or more Active Time Battles. Between locations, players change the Soul Breaks assigned to characters and move characters between the front and back rows.

Each location has a Stamina cost to challenge it. Used Stamina points regenerate at a rate of three minutes per point. The player’s maximum Stamina starts out at 20 points, and can be increased by collecting Stamina Shards.

The battles in a location are fought consecutively, with some status effects from each battle carrying over to the next. Once all battles in a location are clear, the player is given a score for that location—”Novice”, “Expert”, or “Champion” (in Japanese: “Normal”, “Good”, or “Excellent”)—based on time taken, damage received, number of player characters KO’d, and special scores for any bosses that were fought.

Damage taken, abilities used, and special move gauge all carry over from each location to the next. The player’s overall performance in the dungeon is determined by the scores from each location, with higher scores required to master a dungeon. Rewards are given for both the first times that a dungeon is cleared and mastered, which can include Stamina Shards, mythril, equipment, abilities, orbs, new party members, and unlocking further worlds and dungeons. In addition, clearing a dungeon has a Gil reward given each time.

In this game, players assume the role of a summoner, opening scrolls in order to acquire monsters to fight in turn-based battle.

Cairos Dungeon is a critical element in the game. It is where players farm the majority of their runes, all awakening essences, and a variety of others. These dungeons range in difficulty from B1 being the easiest, to B10 as the most challenging.

In addition to evolving to a higher star grade, another gameplay mechanic is awakening’, which transforms the monster. The process requires “essences” of the element of the monster: fire, water, etc. Monster’s that are naturally higher stars, or summoned at higher grade require more essences. Awakening a monster changes its appearance and name, boost its innate stats, and may allow it to gain a new skill.

Ultimate Ninja Blazing is an energy-based unit placement game for iOS and Android phones. It works through a narrative, Naruto, as the mode of campaign for the game starting as far back. This campaign mode isn’t going anywhere seeing as it goes back to a time when Naruto wasn’t officially a shinobi yet(game has evolved since to Naruto Shippuden). Based on the fact that different units are being used to build on the premise that faces off battles, the game primary focuses on the creation of units. You need to get through the mechanic of acquiring units to level up and fight with them in centric battles.

Game modes include the mission mode, where the player goes through the entire Naruto narrative from the campaign standpoint, PvE where you join other teams with whom you go through missions and PvP where you play against other teams.

Ultimate Ninja Blazing primarily focuses on three-player teams as is known for the Naruto world. Each member of every team should have a substitute set of slots to switch between characters amid the battles. For the case of the battles, the game uses a blend of product-placement and turn-based game play. All units are segregated to come up with specific units at the start that let characters attack their designated targets.

Digimon Links is an RPG based on the popular Digimon franchise. In the game, you get your own farm that you build and expand for your Digimon to live on.

The farm is an area of the game you’ll spend a lot of time on with it being your hub world. In the farm, you can place buildings that allow you to do certain functions for your Digimon like being able to research, increasing your Digimon capacity, or unlocking further ways to train your Digimon.

As you go through the mission mode you’ll unlock more buildings you can put on your farm giving you more access to things you can do with your Digimon. One of the most important things on your farm you can have is the Meat farm you get during the tutorial.

Meat is important because it’s the food your Digimon eat and it helps them level up by feeding it to them. Upgrading your meat farm is a really smart idea whenever you get the chances to because the more you upgrade the more you can hold and harvest.

Outside of the farm, there is the mission mode where you take a team of 3 Digimon you have and fight with them in a turn-based battle system. The battle system is really great and similar to other mainline Digimon games like Digimon World 3 and Cyber Sleuth.

Each Digimon has their own set of attacks, typically one basic than two special attacks they can use. The special attacks take AP so you have to make sure the green bar under your Digimons help has some points in it.

In case you have been thirsting for a Final Fantasy game that doesn’t seem like a horribly implemented sequence of 3D skyboxes, Brave Exvius could be just the thing for you especially if you are into the classic style more. This role playing game is specifically designed for Android and iOS mobile phones and includes all typical Final Fantasy elements from the crystals to expansive world maps and of course, the sullen heroes.

There are also a couple different types of dungeons you can die in or enjoy while exploring the world of Brave Exvius. But it’s not the dungeons that make the game fun, the fact that you get bring your friends aboard does. The moment you get into a dungeon, you are assigned a list of characters that you have to take with you.

The most interesting thing about these characters is that they belong to real people. You can also add real people to your party and use their abilities to augment it, like you’re renting them. Having these individuals on your friends’ list comes with an added advantage – you get to use their items, giving you greater advantage when dungeoning.

Players rank up through separate experience systems but the units or characters in their parties have to obtain their own experience. Upon completion, you receive expr items that can fuse into your character and drive the stats up.