MMORPG (Massively Multiplayer Online Role Playing Games), or MMO (Massively Multiplayer Online) games as they are commonly known as are fun online games that feature several players in the same “universe” simultaneously. As an MMO player, you get to interact with several other players (up to millions) in the shared universe of the game through actions such as fighting, allying (clans, guilds, factions, etc.), social interaction through chat messages, and so on. This makes playing the games a lot of fun. 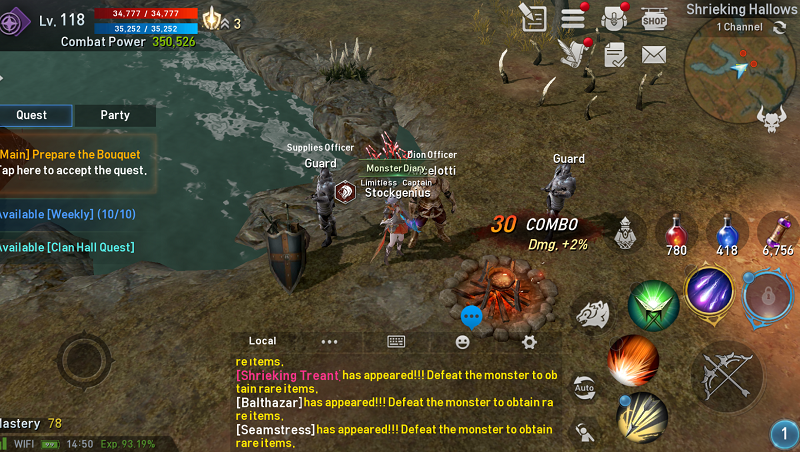 Initially, MMO games were designed to be played on computers due to their high processing power. However, in the past few years, mobile devices have come a long way, with their technology evolving exponentially. As a result, mobile app developers have found it easier to create MMO games for mobile devices, and some are even popular that computer MMO games.

The best thing about mobile MMO games is that you can play them on the go, wherever you are. Therefore, whether you are in the office, on a business trip, on a vacation, or any other place, you can still enjoy your favorite game.

If you are looking to play some MMORPG, below is a look at some of the best options that are available:

If you are a fan of the classic Ragnarok Classes, then you will definitely love this game. It is one of the many Ragnarok Online games that have been developed by various game developers over the year. However, what sets Idle Poring apart from the other RO games is that it brings back the feeling of the original RO game. The images of the game, characters’ attire, music, and the types of activities are all based (very similarly might I say) on the original Ragnarok Online.

However, Deja Vu is not the only reason why you should play RO: Idle Poring; the game has lots of activities that you can engage in, all while interacting with millions of other players from all over the world. These activities include:

– Increasing your skills and character attributes – the higher the character level, the more the features you unlock
– Obtaining gear and improving it – mostly weapons, which you can either buy at the market or get it off from your enemies when you defeat them in battles. Once you have the weapons, you can improve them by refining them with diamonds.
– Raising pets – the pets help you out in various activities in the game. Raise as many pets as possible to increase your power and chances of survival.
– Epic battle fights – RO: Idle Poring features both PvP and PvE battle fights. Raise your skill level, obtain and refine your gear, and raise pets to increase the chances of winning fights.

Lineage 2 Revolution is one of the most popular MMORPGs games. It is a fantasy, action-packed game that will keep you glued to the screen for long hours. The game allows you to choose a preferred race for your character – human, elf, dark elf, and dwarf. On top of that, you also get to pick your character’s special skill – warrior, mage, or archer. From here, you can increase your character’s skill level by taking on tasks and participating in various PvP battles.

Speaking of PvP, Lineage 2 Revolution outdoes all the other MMO games when it comes to the quality of the PvP fight scenes. The controls are very easy to master and use, and the graphics are excellent. On top of that, the game comes with an AutoPlay feature. Therefore, if you are not feeling up to it, or just want to take a short break, you can activate it and let your character do all the fighting for you.
While playing this game, you can ally with other players to form strong clans. Your clan can the fight against dark monsters in the fantasy world of the game, raid dungeons, or compete with other clans.

In the Legacy of Discord: Furious Wings universe, you become a hero, one who is willing to stand up and fight against horrible monsters. With the universe featuring an endless list of monsters, you are guaranteed non-stop action fun, for as long as you are willing to play. The game also features PvP battlegrounds, where you can compete with other players. You can even partner up with some players to form clans and then compete in clan vs clan battles.

Another interesting thing about this game is the level of customization it allows as you upgrade your character. With hundreds of equipment and skills that you can unlock, you can transform your character from a simple warrior into a god of war. The coveted feature of the game is the Wrathwings, which gives your character the ability to fly, not to mention devastating power against monsters and rival players.

Blade: Sword of Elysion is an action-packed, hack-and-slash MMO game that you can play on your Android or iOS device. The game is set in a fantasy universe, which features the Dark Lord, a resurrected evil, as the big bad monster. As a player, you create a character to fight against the Dark Lord and his forces. You can pick from three classes of characters – Warrior, Mage, or Assassin.

As you play the game, your character skill and strength improves, allowing you to unlock more features and equipment. You can also rack up more skills and experience for your character by participating in other events, for example, PvP battles. The PvP battle feature is especially interesting since it happens in real time, and can feature up to 10 players on a single battlefield. Also, you have the option of striking against rivals, and at the same time, countering their attacks.

In addition to PvP battles, you can also raid dungeons for more skills and excellent finds, which you can use to upgrade your character. You can conduct the raids as an individual, or by allying with other players. And with the dungeon going as high as 100 levels, you are guaranteed an amazing gaming experience that will have you on your device for several hours each day.

If you are looking for a recent release MMORPGs, Crusaders of Light is one of the newest games on the market. Like all other massive multiplayer online role-playing games, it comes with features such as quests (with around 300 hours of gameplay), guilds (each can hold up to 40 players), tons of gear that you can collect as you play, social interactions (chat messages, option for taking and sharing selfies, sharing customized characters, etc.), and PvP battles.

The PvP feature is, however, a bit different from most other MMO games, as it allows for one vs one player mode, three vs three players mode, and five vs five players mode. The game also features in-app products, which you can purchase and use to upgrade your character.

Despite being one of the newer MMO mobile games, Crusaders of Light is quite popular. It has between one and five million installs (for Android phones only), which is quite an impressive figure for a mobile application.

HIT Is another popular MMORPG that you should give a try. Like any other MMORPG, it allows you to create a character in a universe where you can engage with other online players. However, what sets HIT apart from most other MMO games is the fact that it focuses more on game gear, control, graphics, and PvP functions. Thanks to the Unreal Engine 4 that is used to power the app, all these game features are at the top of the line.

Therefore, when you install HIT on your device, you can enjoy long hours of amazing gaming experience. You will also enjoy regular updates, which will come with additional features and functions such as new challenges, attacks, characters, and so on.

Combined (Android and iOS users) the game boasts of a massive 5,000,000 download, which should tell you just how popular it is.