This guide is designed for all the new players to Yu-Gi-Oh duel links.

When it comes to the card packs in the game, Ultimate Rising is a really good pack to start with it. It was one of the first packs put into the game and its cards are a little outdated because of how old the box is but it still has really good support cards in it.

Sphere Kuriboh is a good example of this, a card a lot of people use. Also Sonic Bird, which is a strong 4-star monster.

Age of Discovery is another good box, also added early in the game. This pack has a lot of Water support so it’s good for recent pack releases that focused a lot on water cards.

Though if you are new I wouldn’t suggest starting with either of these two packs because they are outdated. But they are useful as you get further.

If you’re a brand new player and you have the money for it I recommend starting with the Crimson Kingdom box. Build yourself a Red-Eyes deck because it has the Red-Eyes zombie dragons which are really good for Red-Eyes decks.

It’s also got Dark Paladin which is one of the strongest fusions in the game and great for farming decks. So this is a great one for newbies with money.

But if you’re a new player who just has the starting gems to work with I highly suggest Galactic Origin. It’s a really powerful box and probably the best one in the game.

I’d recommend trying to pull the rare cards like Mirror Wall or Saphira. It’s got a lot of the Gladiator Beast cards, Cosmic Cyclone is another good card for support.

So the best way to go about buying cards is focusing on one box instead of several at one time. If you pull from different boxes all at once you’ll never get the cards you actually want and you’ll just run out of gems.

Focus on one box to try and pull the cards you want from it. As you do you’ll get everything you need, so just go full in on the one box.

I would stay away from Resonance of Contrast for now. It has Slash Dragon and some fun cards to work with but nothing is too meta changing and a lot of the cards rely on other cards from the box.

So just focus on Galactic Origin, the Crimson Kingdom is okay, Neo Impact as well to get Mirror Wall. So that’s the boxes, just remember to go for one box at a time and go for Gladiator Beasts because they’re one of the best decks for the lowest price. 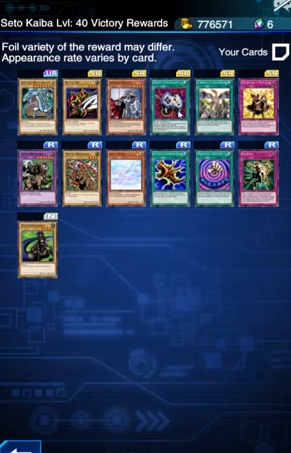 A lot of people don’t realize how helpful the Duel Gate is for new players. With the Duel Gate, you can duel characters like Joey, Mai, and the big guys like Kaiba.

The best thing about it is they give cards you can get for free by beating them. Kaiba especially because he has Enemy Controller and Blue-Eyes.

So be sure to farm Kaiba for those, Bandit Keith for Rare Metalmorph, Gravekeepers from Ishizu. The gate is really good and free way to get cards. 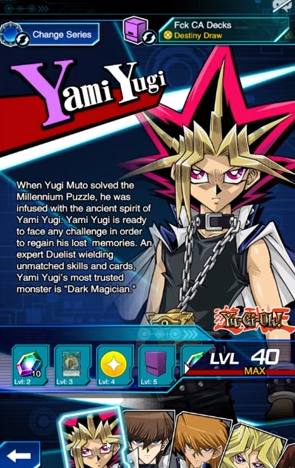 For decks, a lot of new players see people using well built high power decks for competitive play. When you’re new you do not need to be using decks like this.

You can have the most powerful Cyber Angel deck for comp play when you’re new and still get stomped by someone else because you don’t know how to use it. When you’re a rookie you need to be using a rookie deck and build yourself up as you get better.

When you first start you only have access to Yugi and Kaiba as characters in the beginning. Because of that you’re only gonna have one Deck Skill for each of them until you level up.

We’ll start with Yugi who starts with Power of Dark, which immediately casts Yami in the duel. So what you wanna do is filter your cards to focus on Fiend and Spellcaster cards because Power of Dark compliments those cards. 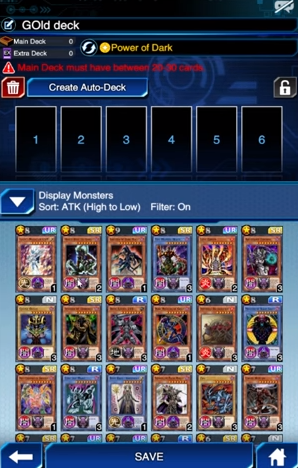 What you wanna make sure you do is not put to many level 7, 6, or 5 monsters in your deck. You want as many level 4 monsters as possible and sort them by ATK.

This way it’ll filter your monsters showing the strongest 4-star monsters first. So what you wanna do is get all the level 4 monsters you can with high ATK and put them in your deck.

But make sure you read their effects as well cause you don’t wanna put in a card that will do absolutely nothing for you. You want to at least have about 10 4-star monsters in your deck, Spellcaster, and Fiend for Power of Dark.

Then you can put level 5 or 6 monsters for your last two slots just to have some powerful monsters in there. Next, you wanna work on Spells and Traps because they’re very important.

You don’t wanna add too many for an early deck and Enemy Controller is a great Spell card to use. You can get this from Kaiba so it’s easy to obtain.

One-Shot Wand is a good Spellcaster equip card, you can get this from the Card Trader. Just look for cards that you think will work really well with your deck, but don’t run field spells if your deck skill acts as one.

Riryoku is another good spell card to use as well. As for Traps, you wanna get some basic support for yourself and nothing to fancy.

Mirror Wall is one of the best if you got it. Windstorm of Etaqua is a powerful trap you can get by leveling up Mai Valentine later in the game.

Another free card is Curse of Anubis which is similar to Windstorm but for effect monsters. You can get Anubis from Odion or Ishizu.

Next, we’ll quickly go over a good rookie Deck set up for Seto Kaiba users. Seto Kaiba has the Deck Skill Peak Performance which powers up all Dragon monsters.

Basically, all you need to do is get Mirage Dragon from the Card Trader and you basically win. Mirage Dragon stops trap cards from being used when attacking so you pretty much have nothing to fear running a bunch of Dragons in a deck with a skill that boosts your dragons.

So other cards like Luster Dragon and Lancer Lindwurm are good. So for Kaiba, you want to get Peak Performance than a bunch of 4-star Dragons with Mirage Dragon.

You can also use Auto-Deck which builds a deck for you. That way you can see what it makes for you then edit it the way you think the deck will work better.

The most important thing about building decks is making sure you don’t flood it with too many Spells or Traps that keep you from getting your Monsters. Every deck needs a balance so you really have to watch what you’re putting in.

NEXT Monster Legends Guide for Beginners - Tips and Tricks