This guide is based on D-Free’s video. It talks about the basics of Re-rolling an account and the best characters to aim for.

The basics of Re-Rolling an account is the act of starting with whatever the game gives you in the beginning. If you don’t get the characters you want during the game’s tutorial you delete your account and restart again.

Then you essentially repeat this process until you get the good characters that you want. This is how Re-Rolling is done and it’s a common thing a lot of players do.

Now for the actual characters that you want to re-roll for. This is important so you know who to focus on trying to get. 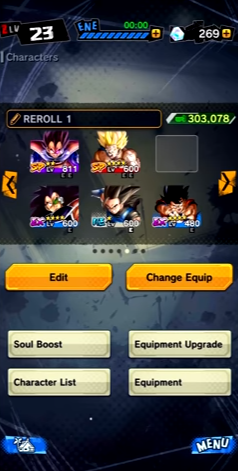 The first character is Sparking Vegeta. Probably the best long-range character in the game and with the suggested team he has incredible Z-Abilities that line up with other Saiyan characters.

Another is Raditz, another ranged character and he’s actually a really good character right now. Gives a +15% to Saiyans max base health which is great.

Shallot is another that gives +10% Saiyan max base health. And Shallot is a beginner character that you start off with so he fits the team dynamic well.

You would have to summon for both Goku’s, Raditz, and Vegeta. And that’s where the Re-Roll comes in for focusing on trying to get these guys. 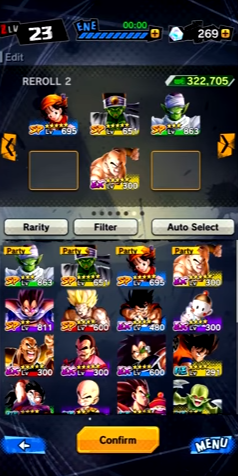 Now for the second Re-Roll team, you could aim for. These are both depending on what you want out of the game and what characters you’re most interested in.

This team is basically an anti-meta team. The first team is the basic meta of the game with Goku and Vegeta, whereas this team is more about countering the first team.

Pan is on this team not for her damage output but because she is a hard counter for Goku. And Pikkon destroys Vegeta making him another hard counter.

Piccolo is good because he’s incredible as a tank and heals your entire team. So he’s there mainly as this teams support and plus his Special Beam Cannon hits really hard and improves the blast damage.

Extreme Tien is another good use for this team. Kind of a utility character to make your other ones better.

In the open slots, you can really put anyone you want there. It’s all about building around the “Anti-meta” idea for this team.