There’s still no better way to experience exciting gameplay and astounding graphics than via the first person shooter (FPS) games. These games are enjoyable as they give you excellent shooting experience. So, if you’re an FPS enthusiast, below are some of the best FPS games that you can enjoy on your tablet or smartphone.

Dead Effect 2 provides an impressive single as well as cooperative gameplay experience packed full of features and DLC content. The game has elements of survival, horror, RPG, rich narratives and slick graphics. You can choose to play one player mission at your own pace or engage with buddies in the co-op multiplayer approach with one of the three players or all of them. You can train and develop your character, collect then upgrade with a wide array of rifles and use body grafts to take back control of the monster-infested ship.

This FPS game is packed full of features. You can select from more than forty weapons, 100 collectibles items & gear plus more than thirty special abilities. All you need is help to fight soldiers, zombies, mutant mechanical dogs, cyborgs epic bosses and fearless drones. Special missions are available with different enemy types to gain experience, plus you can explore the entire ship in story mode. You can also opt for selected and special missions for survival. For the gamers, Dead Effect 2 impresses with its three-layer cooperative mode as well as an elaborate system of over 165 achievements. Featuring large environments, stunning graphics, frantic swift-paced FPS gameplay and countless upgrades. You won’t get bored with Dead Effect 2 once you download it.

Deer hunter is a free game on iOS and Android. Return to the wilderness is the most exhilarating FPS hunting simulator on Android. The gamers can travel from North America’s Pacific Northwest to the savanna of Africa in an epic trip to hunt the world’s most exotic animals. Join your fellow gamers in global cooperative challenges where teamwork is critical. You work together to complete hunting objectives as well as collect rewards.

The game allows you to explore a living world by immersing yourself in diverse environs filled with over a hundred animal species. Shoot attacking predators such as bears, cheetahs, and wolves but remember that hunting beer is just the start. Deer hunter also features maximum firepower where you enjoy endless customization while perfecting your rifles. Upgrade, scopes stocks, magazines, barrels and much more as you take hunting to the next levels. Though Deer hunter is free to play, you can opt to pay some bucks for extra items.

Dead trigger 2 gives you the best zombie shooting experience on mobile. Its graphics are spectacular, though the game hardly takes itself much seriously. This implies that there are a lot of tongues in cheek references as well as over the top baddies to mow down. Besides, this version is much different in that players have a hideout plus a crew that can build stuff for them. Its controls are streamlined to touch, all you have to do is push the cross hairs over the zombie, and when you are in range, you can automatically start shooting. Dead trigger 2 has tons of missions you can enjoy.

There are thirty-seven types of weapons plus a couple of zombie shooting carnage that can last the gamer for a long time. The weapons have upgrades, and the games in application purchases have been scaled back with a removal of the premium currency. This implies that you can buy plus build everything yourself without spending a buck.

If you love mine craft as well as terminating supernatural beings like skeletons, zombies, and ghosts, then pixel Gun 3D is your best fit. The look of the game is heavily influenced by graphics and styling’s of mine craft, but its mission is different, to shoot all the monsters! As mentioned above, it is a first-person shooter game for those who want something a bit more animated, and it also features mine craft style graphics that are surprisingly delightful.

The game gives players a break from realism like you would find in most FPS games. The survival modes put the gamer against a wave of zombie, resulting in a zombie boss at the end. It also features a co-op mode comprising of four people in a party where you can voice chat as you play. To top it off, there’s the online competitive multiplayer mode that has eight-player death matches across different maps. It is lots of fun for how simple it appears. Other features include varied weaponry ranging from Combat M16 rifle, magic bow to the simplest things just in case you opt not to use the guns. It also features eight players in a game and a “now chat” to talk with other gamers right in the battle. 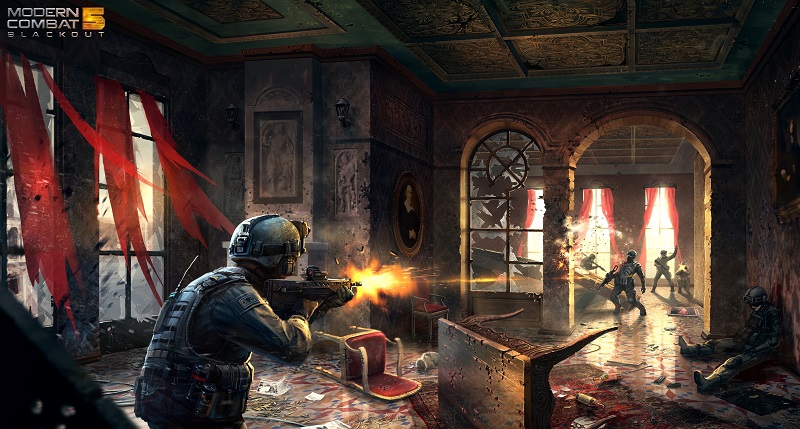 Modern Combat 5 is a first-person military shooter game that gives one a real video game experience from the palm of his hand. Starting with an escape mission in Venice, the campaign is about Caydan Phoenix who travels the world fighting raiders as well as the world liberation army. You can customize your soldier’s unique abilities and load out to suit your play style; unlock more options as you rank up. Gameplay is smooth plus the controls are much easier to manage compared to other Fps since you can modify the settings such as control, HUD, and audio.

This game has beautiful graphics for a mobile game plus runs without hiccups on the LG G4. The modern combat 5. Blackout has a player vs. player (PVP) multiplayer mode with five game modes; Free for all squad battle, VIP, zone control, capture the flag as well as team battle. You can test your shooting skills against gamers around the world where you work your way up the global leader board. This FPS has minimal ads, but it does have micro transitions like 90% of the mobile games out there.

NEXT 6 Fun MMORPG Mobile Games for Android and iOS