Mobile games have greatly evolved with time. Contrary to a decade ago when the only games available on mobile devices were simple such as Snake Xenzia, today’s mobile games are quite captivating and have high-level graphics. The mobile gaming industry is growing at a very fast rate, with the current market value estimated to be over $46 billion. While there are millions of games to choose from, there are some that have set themselves apart and gained a massive cult-like following. The 5 top fighting mobile games for Android and iOS are:

Released in 2014 by Kabam, a gaming and integrated entertainment company, this game has gone to become one of the most popular and highest grossing of all Kabam’s games. It is set in the Marvel Universe and brings the excitement of getting to pick your favorite Marvel characters and then fighting against the other Marvel villains and heroes. This game has overcome the great challenge of mobile gaming which is the numerous controls on a smaller screen by applying easy controls.

You can tap the screen for light attacks, with the swiping giving you heavier attacks and special attacks being enabled once your gauge fills up. You can also dodge attacks and block them. The game works with a freemium model and thus its most basic features are free with more advanced features being available at a cost. It is divided into many acts and chapters, with each chapter carrying its own set of rewards. It is available for both Android and iOS.

Are you a WWE fan? Then this is the game for you. Released in 2015 for Android and iOS, WWE Immortal was developed by NetherRealm Studios and has brought with it the great adrenaline rush that made us fall in love with Injustice: Gods Among Us. It is not just a clone of the WWE as the characters are not just wrestlers but have superpowers and other animated characteristics that make Immortals one of the most thrilling games. The Rock is literally made of stone and has glowing eyes, Randy Orton plays as a poisonous viper, The Big Show is one huge giant and the “Dead Man” Undertaker can rise after being put down. These are just a few of the characters superpowers.

A player gets to pick three characters who then face off with other three in a tag-team match and if a player wins, he is awarded coins which he can use to buy new players or upgrade the existing ones. If you were a fan of Mortal Kombat, then you’ll fall in love with Immortals; after all, they were both developed by the same studio.

The original Injustice game was one of the biggest ever and Injustice was eagerly anticipated before it was released. Having been released for PlayStation and Xbox at first, the mobile version was released in 2017 and picks up from where the 2013 hit, Injustice: Gods Among Us left off. The world is now facing a new threat known as Brainiac and a super villain group called The Society. Batman has his hands full trying to make the world a better place while Superman sits in a cell where he was put in Injustice.

This new threat is beyond Batman and his only option is releasing Superman to fight alongside him. Injustice 2 retains most of the characters from its predecessor and brings in a few new ones. It also retains most of the features and introduces some new ones that make it even better. For example, it has a gear system which enables players to purchase costumes which give their characters extra ability. As a player fights the villains and wins, he gets random boxes that contain special gifts such as armor, gear and shaders. As a character plays, there is a meter that fills up giving that character special ability to pull off amazing moves. 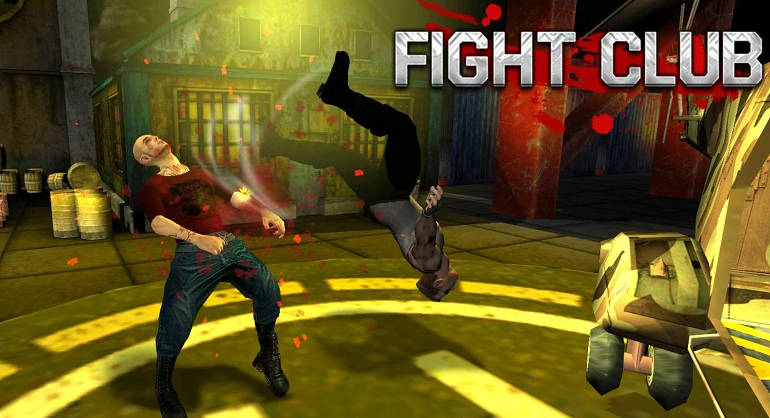 As with many other great games, Fight Club was inspired by a movie of the same name. It was released by Vivendi Universal in 2004 and continues to generate love and criticism in equal measure up to date. A player gets to pick his character, based on the movie characters including the main characters, Tyler and Bob.

As with the movie, a player’s character of choice and his opponent meet secretly to fight in a very gritty fight to the death. The developers have captured the raw reality of the movie by making the fights as visual as possible. The fights are brutal, with blood being splattered even on to a player’s screen. When a character’s bones are broken during the fight, the game shows an X-ray shot to indicate the extent of the damage. The hardcore mode allows a character to carry his injuries from one level to the next.

EA Sports Canada and SkyBox labs teamed up to develop one of the best martial arts game ever. The original PlayStation and Xbox versions had been released in 2014 but the mobile version was released a year later to critical acclaim. This game is based on the Ultimate Fighting Champion and aims to bring the danger, tension and excitement of the real fighting onto the mobile phone screen, The characters resemble real-life fighters in every aspect and the fight inside the cage is as brutal and unforgiving as the real UFC.

Once a blow lands on a character’s face, you can see his skin rippling with the impact. A real good kick to a character has them wincing in pain and agony, something that brings much satisfaction to many martial arts enthusiasts. While a kick to the gut in a real fight would leave a fighter struggling to stay conscious, the characters in this game have been given the ability to withstand lots of kicks and blows to last for longer on the pitch. This ensures that a fight lasts for longer than a few seconds. If you’ve always wanted to try a dropkick on someone, or combine a swift blow to the jaw with a spinning kick like a Chinese master Kung Fu fighter, then this is definitely the game for you.