Big thanks to Just3c for the information in the video above.

The equipment system in Azur Lane is very complicated and using the right equipment in the right situation is the key to success in this game. In this video, I will do a short explanation of the basics on all the equipment types.

The explanation will be short and only cover the information I found to be useful for normal players. If you want to dig deeper I strongly suggest reading the Azur LAne Wiki, they have all the detailed data and formulas for all the equipment.

Equipment in the game has several different stats to it.

DMG: The first number is the based damage per bullet.  The second number is how many bullets fired per shot.

Firepower: The stats provided by this equipment when equipped. HIgher rarity equipment will give more stats bonus.

Firing Angle: The angle which the gun can be fired. For example, Destroyer Guns they have 360 fire angle which means they can fire at targets on their back. Heavy Cruisers Guns have low firing angles, so they can only fire when the target is in a small cone in front of them.

Spread Range: The distance between the bullets fired. Lower spread range means the bullets are more focused, so they are more likely to all hit a single target.

Fire Rate: How fast can the gun shoot. Fire Rate will decrease as you enhance the equipment and gets reduced by the reload stats from the ship girls.

Range: How long can the bullet travel.

Ammo: The Ammo Type, this one is really important I will talk about it a bit later.

For Front Line girls, you usually want a gun with a small spread. Small spread range means the bullets are closer to each other so you can focus fire down a target.

If you use a gun with a high spread, this will happen. This gun had a spread range of 45, as you can see, only 1 out of the 3 shots actually landed, the other 2 shots missed. This means you lose out on 66^ of your actual DPS.

In general, having high spread means you are more likely to hit more targets, but you sacrifice your single target DPS. So equip a gun with a small spread for your front line is the best idea.

Battleships can equip 2 turns, 1 main gun, and 1 auxiliary gun. For the main gun, you also want a gun with a small spread range.

The Quadruple 356mm gun is one of the worst guns in the game due to its high spread. Having a high spread will make your hit area larger but at the cost of your single target DPS.

Battleship’s main role in this game is to take out high HP elites/bosses by landing multiple shots. So you really want a gun with a small spread.

For the auxiliary guns on Battleships, you absolutely want a gun with a high spread. The auxiliary gun is there to deal with the bomber ships. Having a good auxiliary gun on your battleship will significantly reduce the damage your backline takes during battle.

The triple 152mm fires 6 shots in a fan shape. While this is horrible for front line girls, it is perfect on Battleships to deal with bomber ships.

The large spread gives you maximum coverage on all angles and keeps your backline safe.

There are 3 types of ammo in Azur Lane, Normal, Ap, And HE. Different caliber guns have different damage multipliers.

Best Main Gun for each Caliber

As the game progresses we will get more powerful guns. But for now here is a quick list of the best guns. These have the best firing pattern and the highest damage per second.

There really isn’t much choice for Torpedoes. Just use the highest rarity ones you have.

AA guns don’t really matter until chapter 12 which is very late into the game. If you have troubles with enemy planes early game, the best solution is to just increase your DPS and kill the enemy faster.

Generally speaking, higher rarity AA guns will provide more Anti-Air stats so just equip the highest rarity ones you have will be fine. 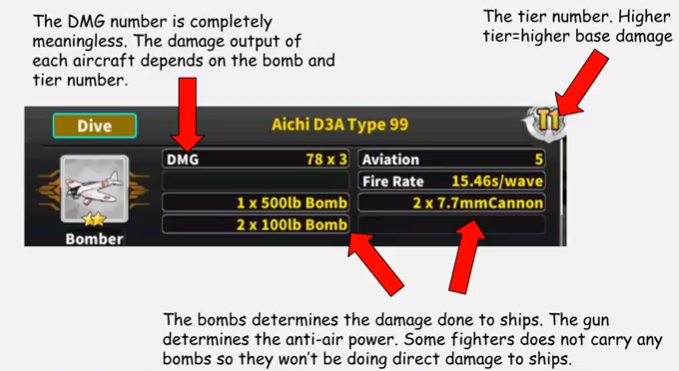 There are two types of Torpedo Bombers. The common type which drops down torpedos in a column. If the description says “Torpedo-Common”, then it is this type.

Common Torp-Bombers are best at dealing damage to a bigger area. Because the torpedo drops in a straight line, itis impossible for all the torpedos to land on a single target.

Barracuda from Royal Tech box is the best common torp-bomber

The second type of Torpedo Bomber is the homing type. The torpedos will go straight towards one target. Currently, only the Japanese Torpedo Bombers have homing torpedoes.

The homing type can deal massive single target damage if the target moves slowly. However, it can miss completely if the target is moving too fast.

Tenzan from Sakura Tech Box is the best homing torp-bomb. 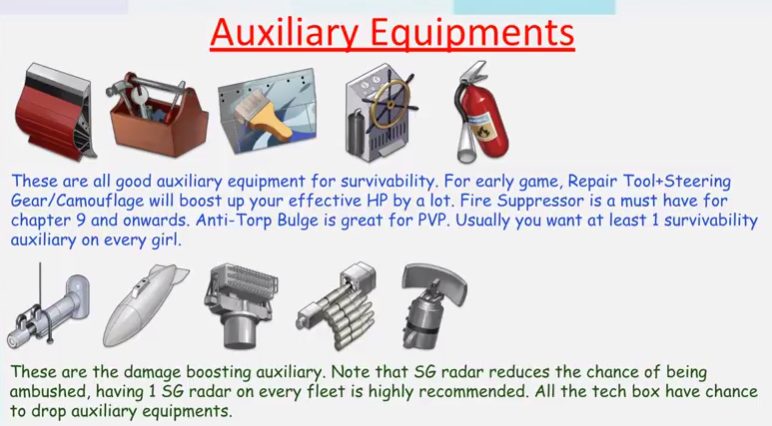 There are 4 types of tech boxes each containing different types of gear. Eagle(USA), Royal(British), Skura(Japanese), and Ironblood(Germany). Here is a quick summary of which type of equipment you can get from different tech boxes.

Check out a similar game like Azur Lane in AFK Arena.

NEXT Epic Seven - All The Ways To Get Skystones