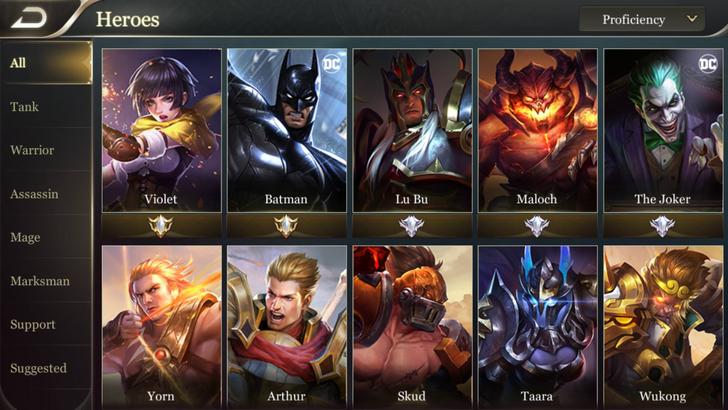 Arena of Valor is one of the newest 5v5 MOBA (multiplayer online battle arena) games to come out on the mobile platform. Need more fun MOBA mobile games like Arena of Avalor? Here are 6 more games to keep you playing.

First on this list is arguably the most popular MOBA game on Android and the iOS platform. Mobile Legends is a MOBA game designed for the smart phone from the ground up. Two combating teams start out at the opposite end of the map and try to destroy the other’s base while defending their own. There are 3 paths, or lanes that connect the base- the “top”, the “mid” and the “bottom”. Weaker minions spawn at certain points that give invaluable resources when killed.

You control one avatar and join in a group of 5v5 gameplay using innate abilities and unique hero skills. Mobile Legends feature a host of different heroes, each with their own play styles and strengths. The game itself is free to play with in-game gold for unlocking aesthetic improvements. You unlock heroes and get valuable exp while playing game matches with friends or strangers. The great thing about Mobile Legends is that it’s not a pay-to-win platform. You’ll need to practice getting better to win and rise in the ranking boards!

Legendary Heroes is a 3v3 MOBA mobile game inspired by Defense of the Ancients mod for Warcraft 3. This is more of a single-player experience than one where you play with people from all over the world. Players choose 3 heroes to take with them to battle against enemy AI. The premise is the same- push through minions and enemies to destroy their base and win the game.

The game offers enough single player missions and a wealth of heroes to unlock and level up. The branching skill system offers a level of strategy that adds to the depth and quality of the game. Legendary Heroes is one of the easiest MOBA games to learn. Touch controls are solid and gameplay is pretty straightforward. This is the game to get if you’re new to the MOBA genre but don’t want to compete with real people just yet.

Vainglory is a highly anticipated MOBA game developed by Super Evil Megacorp for mobile devices. This free-to-play game offers several game modes such as Quickplay, Ranked and Casual against either AI or real opponents. There are more than 30 playable heroes you can use according to how you play. Vainglory separates itself from the pack by utilizing the E.V.I.L. engine and improved touch screen controls that forego the use of joystick add-ons.

Though relatively new, Vainglory has accumulated a number of dedicated players around the world. You won’t have any problems finding someone to play with no matter the time of day. You can even join or create a guild of like-minded players and climb on global rankings or earn in-game rewards. One of the best features of Vainglory is that it has its own eSports circuit featured in many regions globally.

How about a cross-platform MOBA filled with strategy and excitement? Heroes Evolved is primarily a MOBA game that can be played on mobile devices and on the PC. This game can be downloaded on iOS and Android devices as well as on Windows via the Steam platform.

Heroes Evolved is a standard 5v5 arena strategy combat that can be played within 5 minutes of downloading it. The game developers tout Heroes Evolved as a PC MOBA that’s close to the real thing as possible. Finely balanced gameplay is marked by a slew of unique heroes that gets updated constantly. What’s more, you can choose different game modes, such as Quick modes that you can play while on the commute and Multiple modes that give you a fresh experience each time. Rounding out the features are global clan rankings, multiple language support and a vibrant e-sports scene via live streaming sites such as Twitch and YouTube.

Titan Brawl is more of a cartoony MOBA game created for mobile devices. It’s the ultimate MOBA game you can play on the go! Featuring 3-minute quick bursts of play that’s perfect while waiting on the bus or while standing in line, Titan Brawl makes everything simpler and easier. Game modes include online PVP with players around the globe as well as a robust single player experience. Instead of heroes, you control Champions which can be unlocked by playing the game.

Titan Brawl is easy enough to ease in beginners of the MOBA genre while keeping the game challenging enough to keep you coming back for more. The skills and strategy vary so you’ll never feel like playing the same game twice. Instead of the standard 3 lanes, players make use of 2 lanes and a match time of 3 minutes to keep things interesting. The free to play aspect is well-done; you won’t need to really spend real money to get good at it but you can get in-game currency to purchase additional items and aesthetics.

Heroes Arena is a long-standing game developed by the company uCool. Fast, Fun and Fair seems just about right when you’re playing this MOBA game on your mobile device. You can choose from different game modes available, such as 1v1, 3v3 or 5v5. There are other unique multiplayer modes to try out as well. As always, you play the lanes to defeat enemy heroes and ultimately destroy their base.

The game does good on problems associated with MOBA games. This means you won’t have to wait for a long time for players to join. Players on the same regions automatically side and compete with other online gamers. Heroes Arena improves upon traditional MOBA gameplay by eliminating the need to return to base in order to buy weapons and equipment. There are also pre-set communication commands that minimizes lag in strategy between teammates. Heroes Arena is free to play, but there’s an in-game currency you can purchase to get special skins and game items.