Awesome graphics for the mobile screen. Role-playing elements that give you a sense of accomplishment without a huge time commitment. What more could you ask for? 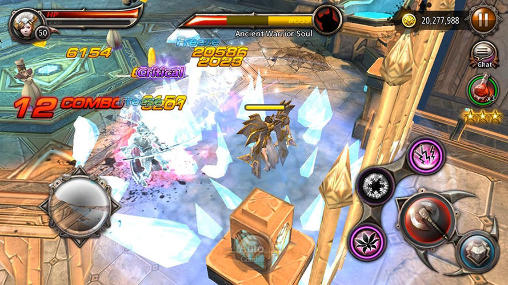 Blade: Sword of Elysion contains popular fantasy trappings in a generic RPG. You get the skimpily-dressed sorceress wielding awesome arcane power, the elves with the ornately-armored suits, small girls with tails and of course, the human warriors and knights. The fun mobile game throws a lot of things for you to do from the get-go. You level up, improve your skills, special powers, collect gear and go on quests. The auto play function begins when you stomp through dungeon after dungeon in search of better gear, equipment and stronger monsters to level with. Auto battle doesn’t begin immediately- you’ll have to clear it first before the option becomes available. You can even spend in-game gems to auto-clear a specific dungeon without having to watch your avatar do it.

The game will need your manual input every now and then. In PVP, you’ll square off with a real human player with your experience, skills and equipment. Dailies and weekly quests keep things fresh while offering plenty of added content to keep you busy for a while. Simply sit back and relax as your avatar navigates a beautifully-rendered 3D RPG world and hacks through countless monsters. If you’re into no-effort RPGs that present a reasonable amount of fun and gear, then give Blade: Sword of Elysion a try. 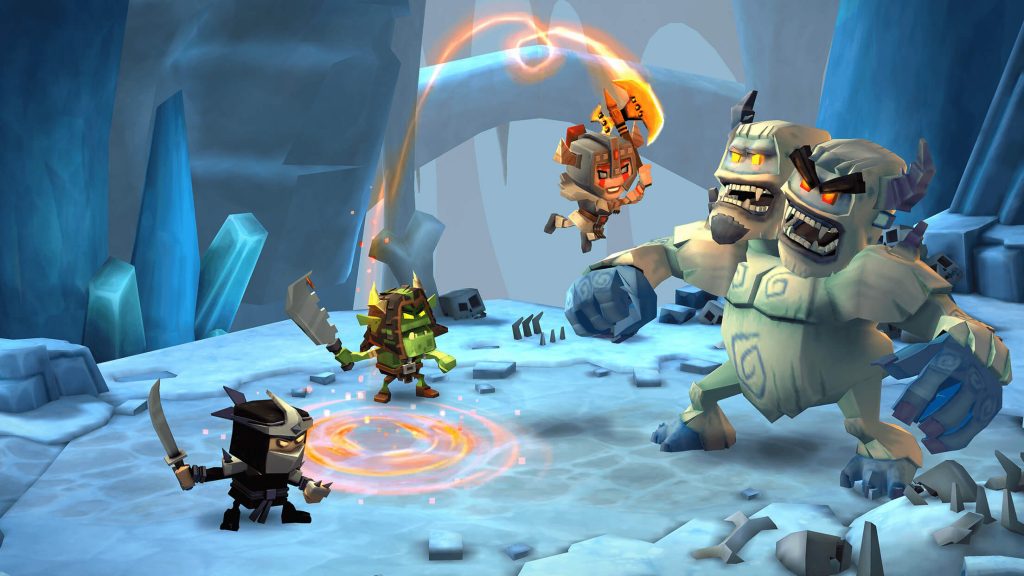 Game developer Big FIsh Games has brought out a fun auto-battler game that’s reminiscent of Lineage 2 Revolution’s game engine. Dungeon Boss is a modern RPG take. You take control of 3 heroes that you can send out on dungeons and fight various monster baddies for exp and gear. Each instance brings out a huge boss that you’ll need to defeat before completing that level. The gold, potions and XP you earn can be used to level, equip and boost your heroes’ skills, weaponry and armor throughout. New heroes can be recruited via the portal system. This portal system also allows you to use real money to buy better heroes using gems and in-app purchases.

Unlike Lineage 2 Revolution, the auto battle mechanics will need to be tweaked in order to become efficient. Don’t worry, as it only require a few taps from you. It goes like this- you select 3 heroes, equip them with gear then send them out to a chosen dungeon. During auto, your heroes will be limited to hacking, slashing and using skills without any input from you. Tap-based combat goes by in a flash, and you’ll be rewarded with exp, coins and a chance for your heroes to get stronger. 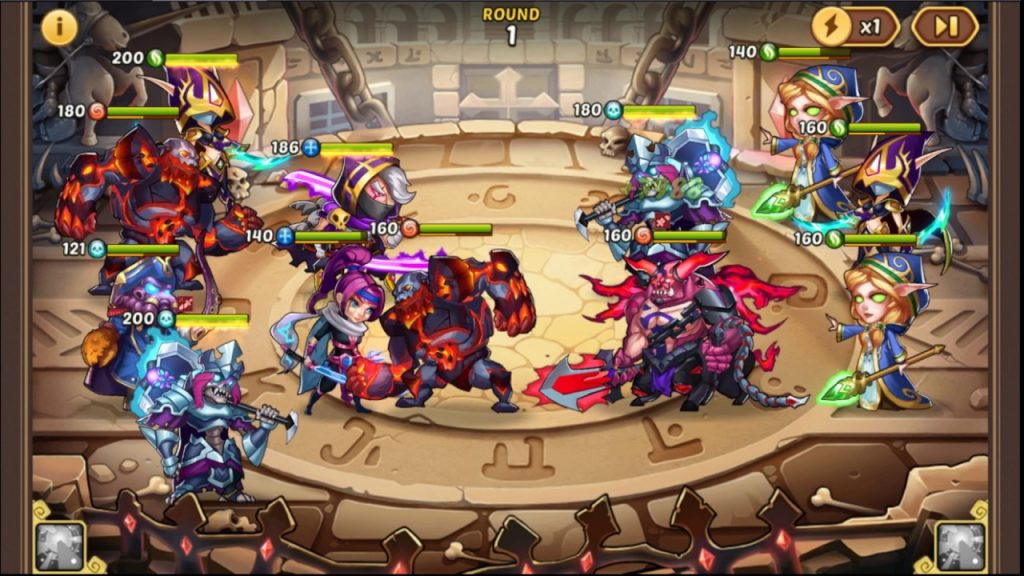 Idle Heroes has the closest thing with the auto battling mechanism you got from Lineage 2 Revolution. All you need to do is to choose the heroes you like then set them to “train”. After some time and get back to the game, you’ll find your heroes stronger and ready for battle. The grind that comes with traditional RPGs is taken out of the equation, leaving players with better heroes as long as they have Idle Heroes on their phones.

There’s quite a number of heroes to choose from, each with their own skills and factions. The lesser heroes can be turned to a commodity called Spirit to fuel your stronger heroes. Single player is mostly running through dungeons and battlefield instances- towers, arenas and guild options, while multiplayer gets a bit exciting in the form of guild wars, where you and your guildmates vie for glory against other guilds. 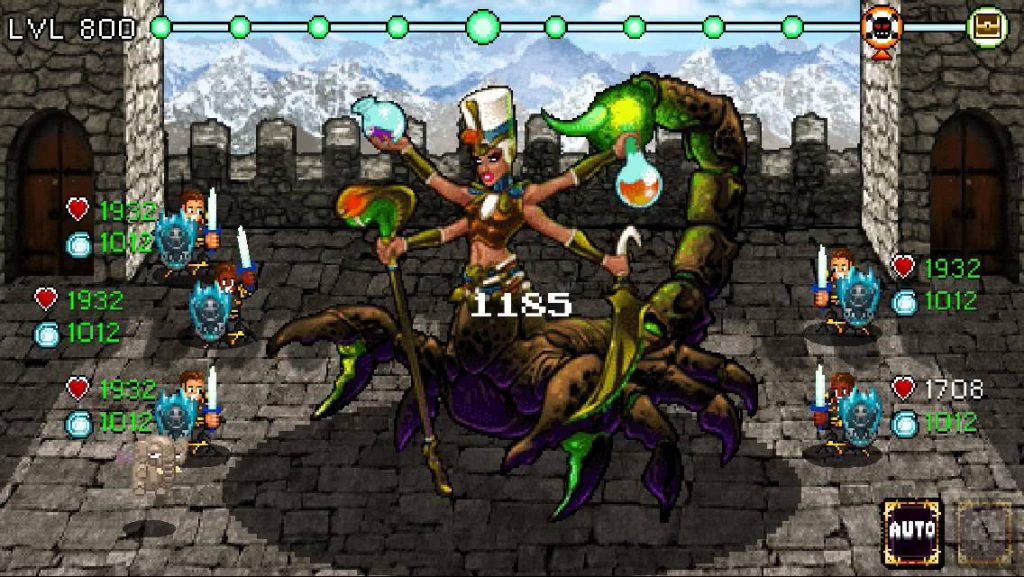 Soda Dungeon is not your typical auto battling RPG. The story starts with you taking over a tavern that’s located right outside a nasty, evil dungeon. Yes, you’ll take the handle of the barkeep and it will be your job to supply a surprising number of sodas in order to attract adventurers who’ll take on the dungeon challenge. You then choose 5 worthy adventurers who will take on the monsters found inside the dungeon.

The 32-bit graphics may be a far cry from Lineage 2 Revolution’s advanced graphics, but the gameplay is just as fun. You’ll watch in awe and laugh at the hero with the weird mohawk or get misty-eyed over a monster that you may have battled before on a Super Nintendo or a Sega Genesis console. You earn gold each time you send heroes into the dungeon, and the stronger they are the more gold you’ll get. It gets addictive as you’ll have a chance to reset after level 100, which earns you precious relics for boosting attack and defense.

Soda Dungeon is true auto combat at its finest. You can simply set down your phone and allow the 5 chosen adventurers to slug it out in the dungeon. You can build up countless hours and level up your heroes without further manual input. Of course you’ll need to buy tavern equipment and soda to keep the heroes flowing in, but the satisfaction lies in entering a new dungeon with stronger equipment and adventurers.

Played Ragnarok Online before? Chances are that you’ll love this auto-battle RPG game, created by the same devs that made the cult MMORPG. At the start, you can choose from 3 generic templates- the warrior, the archer and the wizard, then it’s off you go. You’ll start out fighting the lowest of the low then climb up the ranks and the locations based on Ragnarok Online. The side-scrolling auto-battle mechanics are quite pleasing and relaxing. The music and the BGM will take you back to the olden days when the game was at its peak. It’s not all automatic though- you’ll need to assign character points, skills and equipment manually whenever you level up, but the game play and the cute graphics should more than make up for it.