Anime mobile games are definitely something you want to try. They generally have a simpler storyline, design and gameplay but playing them on phone, anywhere makes it even more fun. If you wish to try out some amazing anime mobile games, how about our recommendations below?

This is a role playing game where you can harness up to 9 heroes to bring to your party. Additionally, you can garner up to three guardians to assume the role of support characters. The storyline in Tales of Link is set in Liafyse, where deities can watch over and keep the peace. This peace is threatened by unknown entities when they enter the heavenly shrine, breaking the seal on the seeds of ruin. The main character is portrayed by an amnesiac that later joins forces with Lippy and Sara.

Digimon Links has an astonishing depth to it with a hint of Nintendo-like quality far as mobile games are concerned. You are required to assemble an entire team of Digimon to discover the causes of the disturbances existing in the digital world. Being a 3v3 tactical RPG, you can ally up with at most two players when taking on difficult bosses for incredibly cool awards.

Dragon Ball is the most popular anime series to have ever graced the world of gaming. While it may sound like a traditional fighting game, DBZ Dokkan Battle is actually an adventure puzzle game. Well, this could be a good thing because it’s much harder playing fighting games on mobile phones than it is to use controllers. The battle system is based on the concept of board games and color matching. The game is rather flashy but you need to be on the forefront with the winning strategy or else you may not be able to defeat some of your opponents. Basically, all you may need to win is to pay attention to the strengths and weaknesses of your enemies and their types’ too.

Join Leafa, Asuna and Kirito together with a wide range of compelling characters from your favorite original series of manga and anime on Sword Art Online, in particular Memory Defrag. You get to work with your friends and battle together in teams and with other players in the multiplayer mode to take down massive bosses. Every character has its own special abilities and skills that they can use to save the world by vanquishing powerful enemies.

Being one of the classics, there’s definitely a little something to be said for this series. Brave Frontier has its eyes set on providing mobile gamers a basketful of nostalgic feelings of the Japanese role-playing games of the olden days. Some collectible bits are sprinkled in good measure. For every good role-playing game there needs to be a land to save – for Brave Frontier, it’s the Grand Gaia, a magical locale that houses hidden powers for those who can manage to vanquish its creepy creatures, but it has been sealed off by certain fallen gods.

Love Live! School Idol Festival is one game that’s hugely popular among gamers. People cosplay them like they cosplay at the cosplay events. In these games, the main characters are female idols from the band known as u and Aquors between which players can switch. As a bonus, you can groove to the music since it’s a free-to-play rhythm game. In the game are two modes; the live mode and the story mode. In the live mode players have to tap on the circles depending on the rhythm. You can level up or get more idol cards to transform your characters when you combine them based on your scores. In the story mode, your role is to work as a helper for u. Your progress will be gauged by completing certain tasks like performing songs. 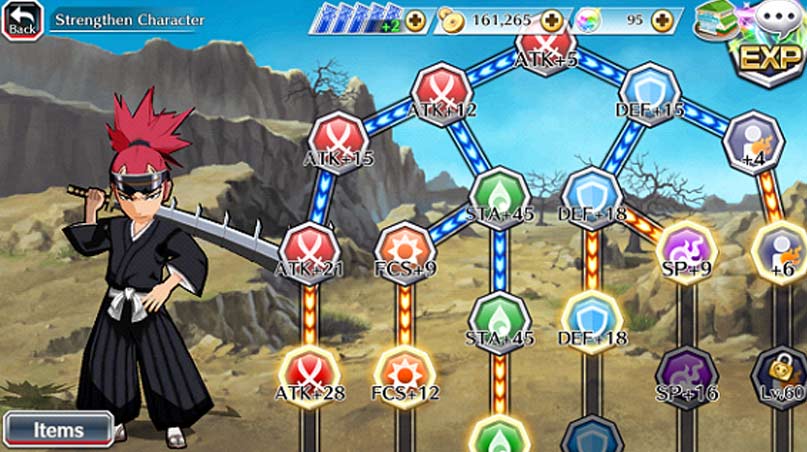 Bleach: Brave Souls is among the few hack and slash common mobile games. The performance is not as captivating as you would expect of anime games. However, with events running often, you can’t get bored as quickly. Some characters can only be made available for certain events, which is why you will need to look out for those events in order to garner some very rare characters.

Puzzle and Dragon is an enticing match-3 puzzle game that involves such elements as in strategy role playing games. It’s more like an overrated version of Bejeweled. The players in Puzzle and Dragons need to match colored orbs that should determine the monster that should attack the enemy and damage the inflicted. The most amazing thing about the monsters is that they are drawn from a variety of origins like religion, mythology and fantasy and the characters are created from popular franchises.

This is a fun energy-based placement unit game for iOS and Android phones. It works through a narrative, Naruto, as the mode of campaign for the game starting as far back. This campaign mode isn’t going anywhere seeing as it goes back to a time when Naruto wasn’t officially a shinobi. Based on the fact that different units are being used to build on the premise that faces off battles, the game primary focuses on the creation of units. You need to get through the mechanic of acquiring units to level up and fight with them in centric battles. Game modes include the mission mode, where the player goes through the entire Naruto narrative from the campaign standpoint, PvE where you join other teams with whom you go through missions and PvP where you play against other teams.

Ultimate Ninja Blazing primarily focuses on three-player teams as is known for the Naruto world. Each member of every team should have a substitute set of slots to switch between characters amid the battles. For the case of the battles, the game uses a blend of product-placement and turn-based game play. All units are segregated to come up with specific units at the start that let characters attack their designated targets.

The One Piece Treasure Cruise manga is insanely popular. It presents the tale of one Monkey D. Luffy, a man whose character is shaped from the fact that he grows up idolizing pirates. However, instead of how we have come to know pirates, regarding them as outlaws, this game brings out that side of them that is more cutthroat and brutal in real life. Luffy sets off hoping to become the king of all pirates, aided by the consumption of a toxic Devil Fruit, which seemingly gives him, the powers to stretch like Mr. Fantastic together with the fearlessness that borders on naiveté.